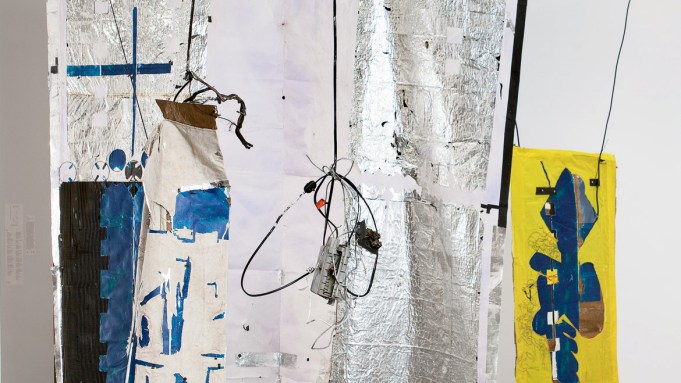 “One of the most peculiar galaxies known, this strange system seems to be ejecting material with explosive violence.” The description appears in a vintage astronomy book from which Berkeley-based conceptual artist Lutz Bacher has torn 84 illustrated pages, dispersing them on walls throughout the 2012 Whitney Biennial. And while the exhibition that these pages punctuate could scarcely be called violent, it has a rich vein of peculiarity. Curated by Jay Sanders, a former director of the perpetually on-trend Greene Naftali Gallery, New York, and Elisabeth Sussman, co-organizer of the event’s notoriously PC installment in 1993, the 76th Whitney Biennial is a restrained and sometimes hermetic affair. But from behind its rather murky outward appearance glimmer some intriguing transmissions from a parallel universe of intensely personal visions.

Featuring work by 51 artists, the current survey boasts fewer names than 2010’s but covers a broader range of age and experience. There are some known quantities here, of course, but plenty that will be new to most visitors. Formally, the emphasis is more on the handmade-if not necessarily the crafted-and less on the flashy productions that held sway when the market was in the ascendant. Selections tend toward the low-tech, retro and anachronistic, too: Where there is sound, it is likely to be hissing from an old turntable; where there are projections, they are often closer to a magic lantern show than an IMAX 3-D spectacular. Overall, there’s a sense that American artists have regained some comfort with the role of outsider, and that the confidence on display springs not from complicity with big money or the media but instead from quiet self-reliance.

These artists’ commitment to waiting for the right audience to come along might sound like arrogance renamed, but it is perhaps better thought of as respect, both for the viewer and for the art game itself. The participants’ investment in the long-term incubation of ideas is reflected in the catalogue, which devotes a generous amount of space to artists’ projects and writings. Few are didactic in the standard sense (sample essay title: “Don’t Explain Yourself,” by Nick Mauss). In the show itself, the most overt attempt to dissolve the fourth wall, Dawn Kasper’s let’s-move-into-the-museum performance-installation THIS COULD BE SOMETHING IF I LET IT (2012) falls flat not only because of its tired form-one roomful of hip clutter looks much like another-but for the artist’s seeming desperation to be liked, manifested by her bubbly chatter and expectation that visitors admire her bric-a-brac.

It’s always tempting to align the Biennial’s emphasis with the state of the union, but there’s mercifully little here in the way of knee-jerk reaction to recent events. One ghost that does haunt the show is that of the American manufacturing industry, which is mourned in Kate Levant’s worked-over sheets of fabric salvaged from an abandoned house in Detroit, and in LaToya Ruby Frazier’s gritty prints and photographs tracing the decline of Braddock, Penn., the steel town where she was born. Other allusions to national entropy are less overt but more esthetically satisfying, even hopeful. Sam Lewitt’s rippling fields of ferromagnetic goop, Cameron Crawford’s raw-looking agglomerations of wood, plastic, plaster and other materials that reference “useless labor,” and Luther Price’s handmade slides, suggestive of Stan Brakhage’s films in their scratchy, saturated charge, all find something valuable in the detritus of a passing age.

Sanders has recommended a minimum half-dozen visits for a full experience of the show. Since performances, screenings, residencies and talks are given priority, this idea, while demanding at $18 per visit, isn’t as unreasonable as it sounds. A large part of the museum’s fourth floor has been transformed into an imposing performance space in which choreographers Sarah Michelson and Michael Clark, theater director Richard Maxwell, theory-driven dad rock band The Red Krayola, and others have enjoyed ample if necessarily intermittent room. (One drawback: negotiating the passageway behind the performance space feels like squeezing through a cramped railroad apartment.) A second-floor gallery is set aside for a film program curated with Thomas Beard and Ed Halter. Artists such as Kelly Reichardt, whose spare, contemplative “Oregon trilogy” marks a high point in recent American cinema in its patient, affecting evocation of life on the margins, and Michael Robinson, whose trippy blends of found footage replicate the woozily nostalgic feel of hypnagogic pop music.

A pair of capsule shows-within-the-show diversely illustrate the artist-as-curator phenomenon. Robert Gober’s micro-survey of mid-20th-century painter Forrest Bess is staged with a straightforward rigor despite its out-there subject, giving those with the patience for a lengthy wall text a fascinating insight into a cryptic but resonant practice. Bess, an isolated figure who performed genital self-surgery and was belatedly diagnosed as a paranoid schizophrenic, made small, intense paintings that still vibrate with visionary energy. Nick Mauss’s eclectic grouping of works from the Whitney’s collection is a more open-ended project. Loosely corralled into the artist’s installation Concern, Crush, Desire (2011), a stage set-like faux-classical hallway produced in cotton and velvet, is a small group of paintings, drawings and photographs by Andy Warhol, Ellsworth Kelly, Garry Winogrand and a clutch of others. And while Mauss’s attempt to articulate his own esthetic via the pattern of influences that helped shape it doesn’t quite survive its institutional context-diminished by the installation’s location and confusion about where it begins or ends-it does offer some intriguing clues to the making of a subtle creative intelligence.

Beyond the Whitney, several competing attractions, some distinctly mischievous, vie for attention with the Biennial this year. Prior to the opening, Occupy Wall Street’s Arts and Labor Group issued a convincing though fake press release on-line announcing the removal of the show’s two major sponsors. Ratting out Deutsche Bank for alleged financial irresponsibility and Sotheby’s for shabby treatment of unionized employees, the communiqué was swiftly disavowed by the Whitney. But as an interventionist text, it has an edge over Andrea Fraser’s Biennial project, There’s No Place Like Home (2011), an institutionally critical essay-as-art represented in the museum itself by a glued-open copy of the catalogue in which it appears, and John Kelsey’s untitled 2012 diptych of discreet printed panels that rework and reformat spam into oblique poetry. The Bruce High Quality Foundation, stars of the previous Biennial, mounted a competing survey in Greenwich Village: the madcap, overstuffed Brucennial 2012, featuring salon-hung works by some 400 artists. Concurrent, too, were the New Museum’s triennial “The Ungovernables” (a title to which the only possible answer was “they wish”) and a dozen or so art fairs.

The Biennial also opened in the shadow of the recent death of Mike Kelley, whose Mobile Homestead project to build a replica of the house he grew up in was represented at the Whitney by a trio of videos documenting the work-in-progress. It’s likely that Kelley, an artist who reveled in psychological weirdness and material mess, would have felt entirely at home in this show.

Michael Wilson is a New York-based independent writer and editor.