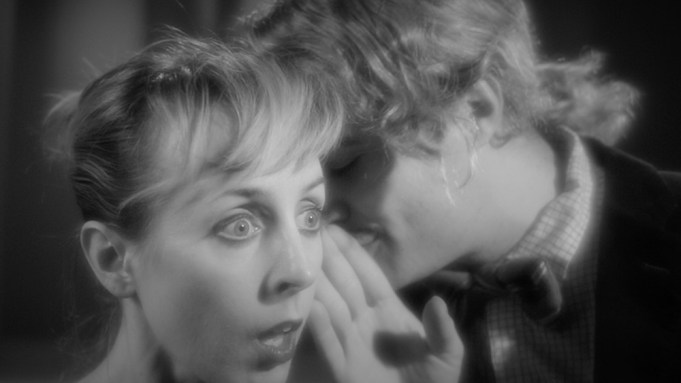 The anticipation of something unpredictable, titillating, or disastrous happening—some act that might puncture through one’s inner need for classification and order—underlies all live performances. It is this expectation of the unexpected that keeps audiences in attendance. For its tenth season, the Crossing the Line festival (September 22-November 3), presented by the French Institute Alliance Française (FIAF) and co-curated by Lili Chopra, Simon Dove, and Gideon Lester, included films, dance, and interdisciplinary pieces performed across such disparate locations as a conference room in the Henry Street Settlement to Federal Hall in Lower Manhattan. Central to the festival’s mission is the goal of creating an event in which New York City serves as a stage and where various types of venues, both traditional and alternative, allow for a range of experiences.

In an unexpected move for an event that foregrounds live performance works, for the opening of the festival, the Nature Theater of Oklahoma screened the final three episodes of the nine-part series Life & Times. Codirected by husband-and-wife team Pavol Liska and Kelly Copper, the quasi-documentary series, begun in 2009, follows company member Kristin Worrall as she moves to New York to begin graduate school to study film. While the first four episodes were performed live (Episode 4.5 took the form of an animated film, 5 is a book, and 6 was performed only in Europe), the final three installments are entirely filmed. These movies’ scripts consist of statements taken from recorded conversations with Worrall, which were set to music and sung by the ensemble in solos or as a chorus. In Episode 7, Worrall ruminates about her experience working for a video production company during college and mulls over such notions as “the critical versus the doing of art.” She attempts to overcome her sense of mediocrity by excelling academically. More music video than documentary, Episode 8 shows the cast, in New York, wandering along train tracks and gathering in a church while singing the dialogue in the overly dramatized manner of a rock opera. The dialogue of the lyrics has been left in its raw state-it includes all of the “um”s and “like”s-which makes the protagonist sound a little vacant and tiresome, but also earnest as she tries, and often fails, to express her inner life. While language often fails her, there are moments of lucidity and surprising eloquence. Yet the film calls in to question the confessional impulse in art and demonstrates the ways in which such emotional “honesty” can be distorted.

For his New York debut, Italian director Romeo Castellucci premiered Julius Caesar: Spared Parts in the rotunda of Federal Hall on Wall Street. The play opened with the sound of a thunderclap as three robed figures entered. They placed a laptop on a pedestal and set up AV equipment, including an endoscope. In this iteration, the dialogue arranged excerpts of Shakespeare’s stanzas out of sequence, with Mark Antony speaking first. Antony began to examine his head and face with the endoscope, while the live footage was projected adjacent to the oculus in the rotunda’s domed ceiling. He then inserted the cord into his nose and guided it down into the pink tunnel of his esophagus. He delivered an impassioned soliloquy in Italian, while an English version was projected onto the wall high above the actors. One became transfixed by the images of his expanding and contracting larynx, quivering and wet, as the muscles conspired with air to form words. An exhausted and paranoid-looking Caesar in a red robe felt his way toward the proscenium, delivering a speech using only sign language and general gesticulations. Brutus was played by an actor who had a tracheotomy and thus has very limited speech capability. His lines were delivered in throaty rasps amplified by a device placed near his throat. In Castellucci’s play, Julius Caesar was hollowed out without being empty. The action of the political drama was amplified by the minimal, crystalline visuals: the sparseness of the stage design, costumes, and lighting foregrounded the work’s pathos. And Shakespeare’s text was remixed and rendered as a kind of sonic texture rather than a traditional dialogue.

Choreographer Maria Hassabi, whose live installation PLASTIC premiered at the Museum of Modern Art in New York earlier this year, presented a new work at The Kitchen titled STAGED. Hassabi, and performers Simon Courchel, Jessie Gold, Hristoula Harakas, and Oisín Monaghan wore clashing, brightly colored bodysuits and pointed-toe white loafers. The performers lay in a mass of tangled limbs in the center of the red-carpeted theater, the audience surrounding them. A scant soundtrack by composer Marina Rosenfeld accompanied the equally spare movement of the performers as they stretched and undulated with tightly controlled, painfully slow movements. This glacial slowness is Hassabi’s trademark. She uses it as a method of resistance, as a bulwark against unrelenting busyness and distraction. The subtleties of one body influencing another, the way the touch of a finger could set an arm in motion, made viewing this work feel like a gift-an offering of calm.

French choreographer Jérôme Bel has made a name for himself as the enfant terrible of contemporary dance. Crossing the Line presented a series of performances old and new and screened a film by Bel in what was billed as a kind of “portrait” rather than a retrospective. Bel is known for pushing against the institutions that commission his work and is wary of his own canonization. At the Joyce Theater, Bel restaged The Show Must Go On (2001), which first premiered in New York in 2005. That first performance polarized audiences and even led to a lawsuit by one viewer who claimed that what he had paid for and watched was not dance. For this iteration, as in the last, Bel cast ten amateurs and ten professional dancers who, for eighty minutes, stood still for long stretches, occasionally breaking into intervals of dance and free-form movement to a soundtrack of pop songs ranging from Edith Piaf’s “La Vie en Rose” to Celine Dion’s “My Heart Will Go On.”

Bel’s work from 1995, Jérôme Bel, made its New York premiere at The Kitchen during the festival. Four nude performers occupied the darkened theater, the only light emanating from a bare lightbulb carried by a female performer. They entered the theater one by one and stood with their backs to a massive chalkboard. They took turns writing their names and the names of cultural figures such as Thomas Edison and Igor Stravinsky followed by a series of numbers that appeared to correspond to those figures’ ages, heights, weights, bank account numbers, and the amount of money in their checking accounts. A male and a female performer moved forward and began pulling and pinching each other’s skin and drawing on each other with red lipstick. Toward the end of the piece, the same two performers urinated while standing in place and used the urine to wipe away the text on the blackboard. While the scatological dimension of the work may have jostled a few audience members, for Bel urination is simply another kind of movement that can be choreographed.

The spotlight on Bel culminated in the premiere of MoMA Dance Company as part of the titular museum’s Artist’s Choice series. Bel selected twenty-five MoMA staff members across all of its departments to perform in the museum’s atrium twice a day, from October 27 to October 31. Ten members of the ensemble took turns leading somewhat spontaneous dances to various pop songs that the other performers then followed. The final performance was danced to Frank Sinatra’s “New York, New York,” with the refrain changed to “MoMA, MoMA” and sung in unison by the company while they cancanned in unison. The audience clapped along, waved to friends in the performance, and beamed at the sight. With MoMA Dance Company, Bel managed to outdo his own cynicism about institutions. Dance here was used as a sort of corporate team-building exercise. One can speculate that it was the MoMA staffers who decided on the self-congratulatory finale, which came across as promotion for the museum.

The sheer range of events that Crossing the Line brought to New York this season is, in itself, laudable. The lack of an overt curatorial rubric to unify the performances allowed for the unfettered diversity of the lineup but also came at the cost of experiencing the festival holistically. While the curators effectively choreographed attendees’ movements through the city’s various performance spaces, the boundary between spectator and performer was never wholly breached. That line, as well as the one between institution and public, was respected and asserted so that, as the festival concluded, one felt hungry for something a little thornier and messier.