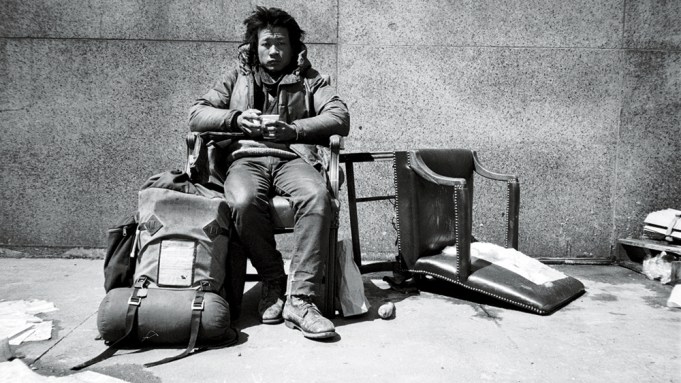 THE WINTER OF 1981–82 was one of the coldest on record for New York City. In the fall, Tehching Hsieh, a then little-known performance artist and an illegal immigrant from Taiwan, had declared that he would not take shelter for an entire year. So throughout that winter, in the freezing cold, Hsieh could often be spotted on the streets of SoHo warming his hands over a fire. The only thing separating him from a typical homeless person was a sign hanging from his knapsack, specifying the rules of the performance that he had embarked upon. For “Outdoor Piece,” 1 he forbade himself to enter any “building, subway, train, car, airplane, ship, cave, tent” from September 26, 1981, to September 26, 1982.

Surrendering to the natural elements for a prolonged period makes one, in effect, an animal. The problem is that you’re still in human form and thus vulnerable not only to the violence of the elements but also to systematic abuses by your fellow humans—negligent passersby, street thugs, police officers, and property owners whose patience your very presence tests. The threat of annihilation is very real, though most often you are simply asked to move on—to keep moving when there really is no other place to go.

“Outdoor Piece” could be read as a dramatization of Hsieh’s immigration status in New York, in all of America, at the time. He was an undocumented alien, a stateless person. And when you have no nation to call your own, you have the burden of freedom to contend with: your home is essentially anywhere, everywhere. You are left to wander—and to do little else.

Taiwan, a country that is not currently recognized by the United States or most other nations, is the place he ran away from, at a time when it was a military dictatorship. Hsieh trained as a merchant sailor, jumped ship in the Delaware River, and swam to shore.

All that is left now of Hsieh’s yearlong exposure is the documentation. That’s because the artist doesn’t re-create his works. And he creates no new work. He has given up art-making altogether to devote himself to a different task: documentary re-presentation.

The process is based on five works that he made between 1978 and 1986, each a performance lasting twelve months. In the first, known as the “Cage Piece” (1978–79), Hsieh locked himself in an 11½-by-9-by-8-foot cage he had installed in the loft where he was living at the time in downtown Manhattan. He had a friend deliver food, remove his waste, and take photos to visually confirm the performance. For the duration, Hsieh eschewed reading, writing, conversation, listening to the radio, and watching TV.

“Time Clock Piece” (1980–81), the second performance, is today the best known, its documentation a curatorial favorite. Every hour, Hsieh punched a time clock in his studio, took a self-portrait, and left the room; he also scrupulously recorded each occasion when he missed his punch time, or checked in early or late. At the beginning of the project, he shaved his head. Consequently, in both the completed photo sequence and a six-minute compilation video, you can see the artist’s hair grow back.

Then came the outdoor performance, followed by “Rope Piece” (1983–84), in which Hsieh and artist Linda Montano were tied at the waist with opposite ends of an eight-foot rope. The pair stipulated that they would not touch each other as they went about their activities for the next twelve months. For the fifth one-year performance, “No Art Piece” (1985–86), Hsieh vowed to abstain from making, seeing, discussing, or reading about art.

Hsieh’s endurance activities culminated in a project spanning thirteen years (1986–99), during which he could make art but not show any of it. The work—lasting from his thirty-sixth birthday to his forty-ninth—constituted a sort of tapering-off, a drawn-out withdrawal from the world of creation, the world of doing. Yet Hsieh’s retreat was based on a rather equivocal premise—particularly in light of his current re-presentation phase, which coincides with the art market’s “rediscovery” of the artist’s work, its chance to digest (i.e., capitalize on) his past production. How to document a thirteen-year span of something that is not meant to be revealed? What art was created—if any? At the end, using cutout letters of the sort associated with ransom notes, Hsieh simply issued a statement reading: “I kept myself alive. I passed the Dec 31, 1999.” The artist attempted to sum up the whole experience by calling it Wasting Time Art. In actuality, he later admitted, he simply ran out of ideas.

AROUND THE year 2000, after that project ended and Hsieh announced that he would make no more art, he met the British performance-studies scholar Adrian Heathfield. Soon, Heathfield was the foremost authority on Hsieh’s work—and, frequently, the artist’s spokesman.[pq]Hsieh has given up art-making altogether to devote himself to documentary re-presentation.[/pq]In 2009 Heathfield published the multiauthor volume Out of Now: The Lifeworks of Tehching Hsieh, the definitive monograph on Hsieh’s work. 2

Although Hsieh has not lived in his native land for more than four decades, he will nonetheless represent Taiwan in the 2017 Venice Biennale—with an exhibition called “Doing Time,” curated by Heathfield. This has ignited debates, both within and outside of Taiwan: Is Hsieh still a Taiwanese artist? (Technically, yes and no. He was granted United States citizenship in 1988. Taiwan recognizes dual citizenship; the US is neutral on the issue.) Is he even still an artist?

“Tehching has spent most of his time doing time,” Heathfield said last fall at a Taipei news conference announcing their plans. “But by doing time, he became a person who is out of time—not in his own time. A person very much predicting a future time.” 3

Hsieh concurred, somewhat cagily. “Since 2000, I have said I wouldn’t create more artworks,” he noted. “But I’m not dead yet. I’m still alive. And I show my work, so that makes me a sub-artist, in my own words. In Taiwan, we often say, ‘I’m just trying to make both ends meet.’ . . . But I’m still alive, I’m still a witness, so I can give you all sorts of clues related to this crime scene.”

The exhibition in Venice will feature documentation of “Time Clock Piece” and “Outdoor Piece,” the latter material rarely shown before. It is said to consist largely of photographs and hand-drawn maps of Hsieh’s peregrinations around New York City. Heathfield reads the piece as revelatory of a moment to come, the moment we presently occupy:

We see in the “Outdoor Piece” that Tehching understands something that will have happened to us all, which is that life is becoming more precarious, unstable, itinerant. He sees that we are as a species becoming increasingly cast out of our securities, outside of our dwellings. The real issues for the human subject in the future might have to do with our illicit status, our migrant life. That we are in a sense people constantly on the move. This involves us in a new relation to the elements, to outside, to nature. It involves us in a new struggle to survive, to create conditions in which we can survive as human subjects. So . . . this is why Tehching is our contemporary, not a historical artist—though, of course, his work took place in the past.

In a way, Hsieh’s ongoing project of re-presentation of past work fits well with the contemporary art world’s obsession with the archive. Modernism’s insistence on “making it new” has given way to a widespread concern with preserving vestiges of the past that are threatened with loss.

Hsieh and Heathfield both stressed, however, that the Venice project is not a retrospective. “If I do a retrospective,” said Hsieh, “I would do it another way.” He was not keen on doing the project at all. When initially notified of his selection by the organizing committee in Taiwan, he turned the offer down.[pq]One Venice Biennale piece records Hsieh’s leap from a building, breaking both ankles.[/pq]Eventually, the organizers won out. “I’ve never been to the Venice Biennale before,” he said. “I’d actually never even been to Venice before. But I went this year, after I was selected to represent Taiwan, in order to see the space.”

Since 1995, Taiwan’s presentations at the Venice Biennale have been held in the Palazzo delle Prigioni, just off Saint Mark’s Square on the Grand Canal. The Palazzo was originally a supplement to the jail facilities in the Palazzo Ducale, to which it is joined by the Bridge of Sighs. “Once they told me it was a former prison,” Hsieh said, “I knew then I would not show the ‘Cage Piece,’ as that would endow it with too much political meaning. With the ‘Rope Piece,’ that was a collaboration with another artist, which makes it not so easy to show. That’s why we settled on the ‘Time Clock Piece’ and the ‘Outdoor Piece.’”

Heathfield stresses that this is the first time materials documenting the two works will be shown in concert, and that each re-presentation will be more complete than in previous separate exhibitions. Promising to be even more of a revelation, however, is the inclusion of several early works. Made when Hsieh was still living in Taiwan, these pieces have never been shown in public. Hsieh and Heathfield were mum on the details when they made their announcement; in fact, they were still looking through the archives, trying to decide which works to choose and how to present them. In February, Hsieh’s New York gallery, Sean Kelly, revealed that one of the pieces will document the young artist’s intentional leap from a building, which resulted in two broken ankles.

What’s certain is that Hsieh’s Venice endeavor is likely to be a step forward in his ongoing project—his ongoing projection, we might say. “This is not a simple historical exhibition,” said Heathfield. “This is really an exhibition in which time is in question.” His eyes sparkled with excitement, but, when pressed, he would go into no further detail, other than to add: “With Tehching, there is always something new in the archive.”

TRAVIS JEPPESEN is a writer and artist living in Berlin.

1. Officially, Hsieh’s endurance pieces are now titled One Year Performance 1981–1982, etc. For clarity and economy, however, I have used their long-familiar informal names throughout this text.

3. This and all subsequent quotes by Heathfield and Hsieh are from their Venice Biennale press conference at the Taipei Fine Arts Museum, Nov. 21, 2016.