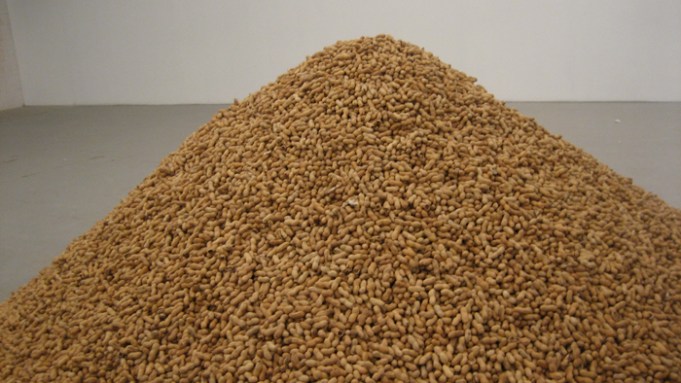 Formerly a food writer and party planner, Jennifer Rubell has recently endeavored toward food eventing, an invented media that has naturally garnered her a specific niche in the art world. At a 2007 event at Art Basel Miami Beach, Rubell—daughter of the Miami-based pack of collectors, and niece of Studio 54’s Steve Rubell—greeted guests with a deconstructed take on breakfast, featuring enormous platters of hard-boiled eggs, croissant and bacon, with only surgical gloves as service. On Friday, Rubell’s agenda was to provide sustenance to 500 attendees of the opening celebration of the fourth Performa Biennial, the vast, three-week performance art invitational founded and overseen by Roselee Goldberg that this year features 170 artists and 25 curators (not to mention not-by-invitation satellite performances). Rubell’s dinner included an experience that played out, in descending order, over three floors, and many of the art world’s most famous faces were faced with food and drink at its most conceptually liberated.

The evening began with Rubell’s no-frills take on a dive bar-cum-house party. Guests were greeted with an enormous table crammed with every mason jars and cordial glasses. In the far corners of the space lay giant piles of peanuts and ice. Around the corner, bottles of liquor, mixers and garnish of all stripe lay unopened, for guests to partake of. Harkening to a truly great BYOB, somewhat reluctant guests soon were soon persuaded to participate—to great mess. The art world is not the refuge of the rejected barmaid.

One floor below, Rubell presented the main course: one ton of ribs (a nod to Adam’s creation of Eve via Rubell’s devotion to round numbers in food preparation) which lay in a single, enormous pile. Streams of honey poured from the ceiling into small pools around the meat, recalling Joseph Beuys’ 1977 action “Honey is flowing in all directions,” wherein the artist distributed honey, by a pipeline, through the various chambers of the Museum Fridericianum. The final floor (dessert) featured three whole apple trees, each felled and lying in sculptural disarray on the floor, seemingly taking the blame for Eve’s appetite. In the middle of the room, large bags filled with powdered sugar, into which sweet freaks donning rubber gloves dove in and fished out cookies, emulated an innocent cocaine fantasia in the spirit of Rob Pruitt’s “Cocaine Buffet” (1998). The far end of the room featured oversized dark chocolate bunnies, created by famed chocolatier Jacques Torres, that had the look of Jeff Koons’ famous bunny sculptures in miniature form. Hammers were provided to smash each rabbit, giving in to man’s most base instinct (after hunger and procreation): aggression.

There’s something wonderfully cynical about Rubell’s food performances, in which food occupying its most honest state. In her large food piles, the interest in sheer tonnage recalls slopping the pigs-feasting becomes feeding, albeit with the most exquisite-tasting of nourishment. Democratizing the way people dine, and reducing it into a crude bodily function, Rubell creates an experience where art is as enchanting as it is transitory, and consumption is stripped of its delicacy.