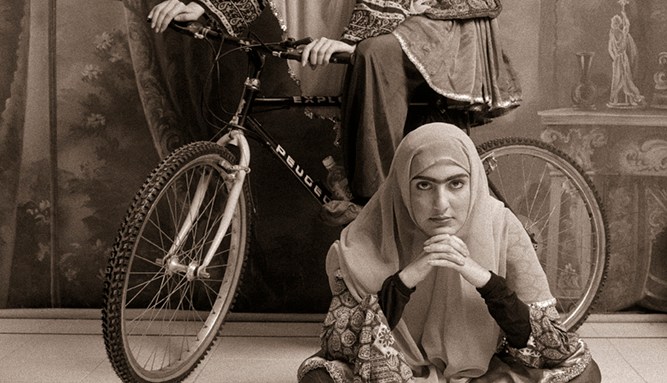 Many exhibitions at the Rencontres d’Arles—a photography showcase held annually since 1969—take place in Gothic churches on winding medieval alleys. But while the backdrop is antiquated, the art on display is fresh. Featuring a mix of young and seasoned artists, this year’s offering demonstrates how photography is a medium that constantly reinvents itself to reflect the complexities, even the absurdities, of sociopolitical reality.

The artists in the thoughtfully curated “Iran 38 Years”—one of over twenty-five exhibitions that remain on view in Arles through September 24—are a case in point. Curators Anahita Ghabaian and Newsha Tavakolian organized a show that speaks to Iran’s contemporary issues through the prism of history. The presentation begins with iconic images documenting the 1979 Islamic Revolution by Kaveh Kazemi and Bachman Jalali that highlight women’s role as active participants in history. The work of these photojournalists shows Iranian women behind the camera capturing protests and marching at the front lines. One striking image shows a woman wearing a black chador and holding a machine gun.

Shadi Ghadirian’s Qajar (1998) is based on archival images by Shah Naser al-Din she unearthed while working in a museum. Naser al-Din, who ruled Iran from 1848 to 1896, was first to bring a camera to the country, and he used it to photograph his numerous wives. While staging her portraits of women, Ghadirian used painted backdrops and vintage clothing to recreate the setting of Naser al-Din’s court. But she also presented her models with modern accoutrements like a motorbike helmet and a radio to create a poignant contrast between the restrictive historical conditions and the casual poses of the contemporary young women.

In politically fraught contexts, irony and metaphor can be powerful social weapons. In Look (2012–2013), an installation incorporating wallpaper, photographs, and video, Tavakolian (who doubles here as curator and artist), presents portraits of her neighbors. She began Look when the Iranian government passed an injunction against taking photographs in public, effectively putting her out of work as a photojournalist. The blown-up images present her apartment complex, while miniature screens show videos of her neighbors’ private moments. The neighbors are nearly still, making minimal movements like raising a hand to smoke a cigarette. The images of the building’s exterior were taken by day while the portraits were shot at night, creating a stark contrast between the façade and the private lives that take place behind it.

Another photographer responding to the present is Les Rencontres Discovery Award nominee Guy Martin. This year ten finalists were chosen from among two hundred submissions, and featured in curated exhibitions. Martin has worked as a photojournalist in Turkey for years, but recently he started to notice the inadequacies of his professional methods and turned to capturing reality in a more fragmentary way. His exhibition “The Parallel State” consists mostly of street photography: documentary images of protestors, trees with bullet holes, and a caged songbird, among others. But Martin intersperses these with the photographs he took on the sets of Turkish soap operas, which are hugely popular in the Arab world. He sees these shows as way for Turkey “to export its culture of secularism and wealth” and communicate “how Turks, particularly Turkish women, handle modernity.”

By juxtaposing these two types of images—some captured in the moment and others more deliberately staged, with sets and costumes—Martin hopes to draw our attention to the role of performance in our daily lives. He understands “performance” in a broad sense—not merely as acting but also as a subject’s awareness of and reaction to being photographed. One of Martin’s photographs shows an anti-government protestor who has fallen to the ground. In the accompanying audio, available via headsets in the gallery, Martin explains that the young man—whom we see lying on the grass bare-chested, with other protesters holding his hands as they kneel around him—noticed he was being photographed, and began playing a part. He’s interested in the impossibility of separating what is real from what is staged, and the element of role-playing on the part of both the photographer and subject in the drama that unfolds within a photograph. Another image presents what looks like a group of young jihadists. But again, the audio presents a twist: the picture comes from a television show that satirizes terrorists. Image, truth, and information, are all fragmentary in Martin’s rendering.

Another highlight of Les Recontres is a terrific, career-spanning show of Masahisa Fukase, a major figure in Japanese photography. It follows Fukase’s trajectory from his playfully rebellious family portraits in the early 1970s, in which he captures his elderly father in the company of nude women who aren’t always kin, to the more earnest 1985 series about his father’s portrait-photography studio, which includes a creepy sequence showing a bare skull and doctors studying a skeleton. The last two images’ theatrical mise-en-scenes show how Fukase, rather like Martin, moves fluidly between candid shots and staged ones.

Fukase redefined his practice a number of times. In the 1960s, he went beyond the vérité aesthetic, instilling his images with eerie poetry. The 1963 series of nudes of his first wife, Yoko (1963), uses her body and superimposed fragments to present strange new shapes: a collage of a floating female mouth and breasts in one image, and seemingly headless torsos, like ancient statues, joined in coitus in another. For his iconic, impressionistic “Ravens” (1976), Fukase obsessively studied the birds to the point of identifying with them, using the bird’s name to evoke his state of depression and melancholy, with images ranging from birds in flight, in sharp black silhouettes, to abstract figures. The many playful portraits he took of his cat Sasuke in the 1970s anthropomorphize the pet by emphasizing the expressiveness of its face. In a later series, “Berobero”(1991), Fukase added a performative aspect to his work—he invited his friends and strangers to touch their tongues with him, and captured these intimate exchanges on camera.

While Fukase’s work is not as openly political as some of the other photography on display in Arles, it signals a break with rigid societal norms, particularly in his relentless, at times disconcerting, self-portraits. In one such series, from 1995, Fukase added circular drawings partly obscuring his face. The curators note in the exhibition text, “The fierce impetus of the [drawn] lines suggests the self-destructive aspect that Fukase had built into his life. Spirals, after all, have no end.” Fukase’s relentless experimentation and a keen sense of drama reflect the two prominent threads at Les Rencontres this year, which seeks to position photography not merely as a tool of capturing reality, but as a means of transforming it.