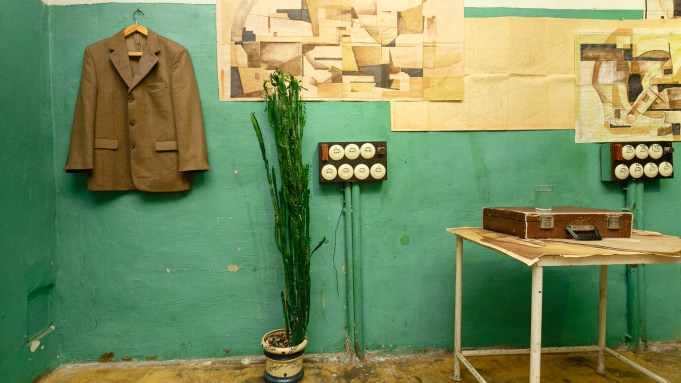 Moscow is plastered with signs commemorating the 870th anniversary of the city’s founding. But there are hardly any references to another, rounder, more significant anniversary. This year brings the centenary of the October Revolution. But how does a nation honor an event that ushered in ideals and forms of government since rejected by its leadership? In 1996, President Boris Yeltsin changed the name of the November 7 holiday to “Day of Reconciliation and Accord,” and in 2004 it ceased to be a federal holiday. There are no public celebrations planned to mark the centennial. Moscow’s Museum of Modern Russian History has a modest show about the Revolution, offering a textbook account. Most of the items on view are facsimiles of archival materials, spruced up with some odd attempts at novel exhibition design: big red plywood boxes at jaunty angles set a jagged course through the show, and images of a blue sky projected on the ceiling seem like a clichéd suggestion that the Revolution “brought fresh air” or “expanded horizons.” The museum is half-closed for renovations, and the show feels neglected and forlorn.

In the absence of official attention to the Revolution, art institutions have taken up the task of reflection and interpretation. The Garage Museum of Contemporary Art launched its first Triennial of Russian Contemporary Art, which I reviewed earlier this year, with a gesture toward the centenary. “Just as the Russian Revolution encouraged the first avant-garde,” Kate Fowle, the Garage’s chief curator, wrote in the catalogue, “the Garage is looking to spur the next.” In May, the V-A-C Foundation—which, like the Garage, is a young private institution backed by a billionaire—inaugurated a new permanent exhibition space at the Palazzo delle Zattere in Venice with “Space Force Construction.” The exhibition included both artifacts pertaining to Soviet history—such as a reconstruction of a workers’ club designed by Alexander Rodchenko and notes from Stalin’s daughter to her father in the diction of Party directives—and contemporary works with a utopian bent, like Cao Fei’s RMB City, the virtual environment she built in Second Life. As beautiful and engaging as the show was, I couldn’t shake the jarring awareness that this exhibition honoring the legacy of the Revolution was made possible with immense wealth accumulated through privatization of Russia’s natural resources after the Soviet Union’s collapse.

Two biennials that opened in Russia last month flirted with revolutionary themes. At the press conference for the 4th Urals Industrial Biennale in Yekaterinburg, João Ribas, the curator of the main project, said that after three industrial revolutions (mechanization, mass production, computerization), we’re on the cusp of—or already within—a fourth, unnamed one. His show, titled “New Literacy” (and on view through November 12), is about the acquisition of skills and habits for the future, with work by sixty artists who address the blurring of labor and leisure brought about by digital media, the treatment of living matter as data, and speculate about where these trends are headed. Launched in 2010, the Urals Industrial Biennale gets its name from its use of former factory spaces in what was once a major Soviet manufacturing region. The venue for Ribas’s exhibition is a machine shop on the riverfront in downtown Yekaterinburg that ceased operations in 2015 and will be demolished next year to make way for high-end real estate. It still smells of machine oil. Faded nudie calendars hang in vacated offices. Broken clocks show different times, which, as Ribas likes to say, makes moving through the venue feel like time travel.

“New Literacy” opens with a trio of works that set the show’s parameters. Workers Leaving the Factory (1895) by the Lumière brothers plays as a digital projection beside the doorway, so that nineteenth-century workers begin their leisure time alongside twentieth-century viewers about to spend their free time reflecting on labor. Alexey Kallima’s ten-by-fourteen-foot painting Spartacus Square (2013) teems with waterslides, a skate park, a carousel, an amphitheater, and other colorful amusements. A Communist future imagined in a more optimistic past, Kallima’s fantasy city manufactures nothing but fun. Job/Work (2013–17) is a funky sculpture spelling its title in scrap materials painted red by ZhKP, a young local collective. They find that their creative work is viewed as play rather than labor in their home city of Nizhny Tagil, and so they’ve turned junk into words, defining their transformative work with the shape of its result.

Ribas included plenty of the sort of video art found at most biennials—elliptical semi-documentaries with soft voiceovers and limp visuals. And as usual there is more of it than any one viewer could watch, which makes the inclusion of some works seem like a perfunctory acknowledgment of important issues. (Forensic Architecture’s The Left to Die Boat, 2014, reconstructs the case of a boat of migrants that sank in the Mediterranean after their calls for help were ignored; Susan Schuppli’s Material Witness, 2013, explores the use of media artifacts as courtroom evidence, and how the personification of a file as a “witness” expresses the ability of recording technologies to accumulate knowledge.) There is a marked contrast between subdued digital video and rowdier Russian work, which includes collections of zines and amateur paintings. But these juxtapositions explode notions of what work is, casting aside distinctions between craft and the creative impulse, manual and affective labor. The only ground for a conventional concept of work is the factory venue, which also asserts its own obsolescence. Ribas didn’t sketch out the components of a new literacy so much as reinforce the inadequacy of the old one; he puts viewers at the midpoint of a revolution, where we wait for the aid of retrospective vision.

Any revolution creates new habits. An industrial revolution changes how we work and access goods. A political one opens new possibilities for identification and affiliation. But the two types can’t be wholly extricated from each other. Yuko Hasegawa’s exhibition for the 7th Moscow International Biennale of Contemporary Art (on view through January 18, 2018) speaks to the mutual influence of technologies for managing the natural and social worlds. She didn’t invoke revolution in her statements, but she didn’t have to: the venue is the State Treytakov Gallery’s building on Krymsky Val, which houses the museum’s collection of twentieth-century art, and the press conference was held in the shadow of a towering model of Tatlin’s Monument to the Third International.

With the title “Clouds â?? Forests,” Hasegawa refers to the competing landscapes of data and nature, positing artists as a “tribe” capable of mediating the differences between the two. Marie-Luce Nadal’s The factory of the vaporous (2014) is an elaborate machine that draws moisture from the gallery’s air and turns it into clouds by approximating the temperature and pressure of the troposphere. Revital Cohen and Tuur van Balen’s The Quiet (2015) simulates the atmospheric conditions that precede a storm, causing the plants assembled within the installation to emit a scent that the artists consider a signal of silence’s substance. One of the most affecting works is a video by French choreographer Justine Emard in which dancer Mirai Moriyama interacts with a robot. Programmed with a neural network, the android moves in response to Moriyama as it learns to act like a human; its attempts at speech come out as half-animal moans. In Sputnik_60 / Protect me from whom I’ve become (2017), Sissel Tolaas presents a series of metal domes that, when touched, release scents linked to the history of space exploration, including the smell of the rubber used on the first satellite. Her work gives the past a perceptible odor.

Much of the work at the Moscow Biennale is the sort of thing more often seen at festivals specializing in science art or new media art. But Hasegawa’s visual narrative integrates such projects with works by Matthew Barney, Pierre Huyghe, and other art stars who nod to themes of technology and science from established positions in art market categories of sculpture and installation. Several attendees complained that the biennial has no relationship to its context, that Hasegawa could have installed the same show anywhere. But it feels enriched by—and sensitive to—its setting at  the Tretyakov, where the display of a volatile twentieth-century history lends credence, for instance, to the suggested reading of Cohen and van Balen’s work as a metaphorical herald of political change. A week after the biennial’s vernissage, the Tretyakov opened “Someone 1917,” an exhibition of art made during the year of the October Revolution. The narrow timeframe of the show emphasizes the state of possibility and uncertainty that existed when the old regime was crumbling, the new one still nascent, and artists felt like they could build the future. Any good biennial makes the viewer feel like a witness to something new taking shape, and Hasegawa’s Moscow Biennale—like Ribas’s Urals Industrial Biennale—created the sense of a process of change.

Winzavod Centre for Contemporary Art, a venue of the Moscow Biennale’s parallel program, features a temporary sculpture in its courtyard that offers an alternative perspective for considering the connections between the revolutionary past and an uncertain future. ZIP Group, a collective from Krasnodar in southwest Russia, erected a tall wooden cone with a stick-figure statue on top, a ragged bit of chainmail dangling from its shoulder like a hero’s mantle. There is no detail that can suggest what this is a monument to—it is just the form of a monument, configuring the relationship between the square and the space above it as a generalized one between everyday life and an exalted past. Beside the sculpture stands a crane, and visitors are invited to stand on it as an operator in a makeshift booth lifts them to the statue’s level. If the biennials put a feeling of some remote but urgent change on view before you, ZIP puts you on view as a temporary observer of the present unfolding right below you.