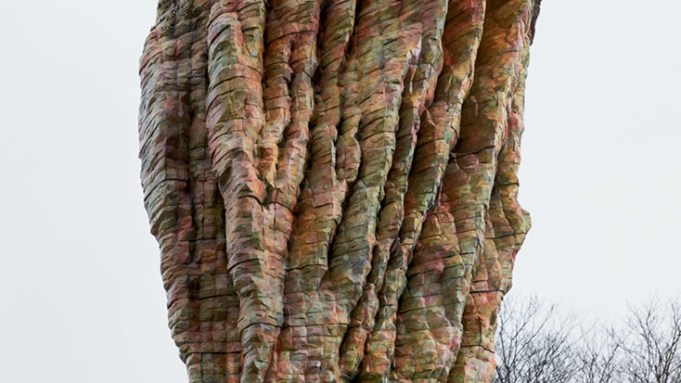 NEAR THE ENTRANCE of Ursula von Rydingsvard’s exhibition “The Contour of Feeling,” on view this past summer at the Fabric Workshop and Museum in Philadelphia, was a wall lined with what the artist calls her “little nothings,” small diverse objects that typically adorn her Brooklyn studio. Some of them are experiments with materials—pieces of wood dotted with paint and graphite, bits of lace and mesh, sheets of perforated metal and embossed paper, dried pigs’ intestines knotted with sisal fiber—she uses to test out ideas and processes that often find their way, down the line, into finished sculptures. Intermingling with these fragments are personal totems, including a photograph of her granddaughter, a lock of her younger brother’s hair, and her father’s winter hat. Though they are tinged with melancholy, the “little nothings” also display a playful ingenuity that has often gone under-recognized in her work: animal organs are treated like fabric, shoulder pads have been cast as breasts, nibbled edges are described as “collaborations with mice.”

Von Rydingsvard often works on a monumental scale—Ona (2013), a craggy bronze permanently installed outside the Barclays Center in Brooklyn, for instance, is 19 feet tall and weighs nearly 12,000 pounds—but the “little nothings” serve as a fitting introduction to the central themes she has explored in her work over the past four decades: the relationship between organic and industrial forms, a reverence for craft and labor, a preoccupation with history and memory. Though von Rydingsvard has employed various materials over the years, she is most closely associated with her works in wood: dramatic, sinuous compositions with densely worked surfaces, achieved through a labor-intensive process of stacking industrially milled cedar four-by-fours and then sawing them into unexpected new configurations. The wood’s standardized format offsets the primordial qualities of her sculptures, which loosely suggest, among other things, fossils, rocky canyons, or cresting waves; her best works tend to exploit the animating tension between the underlying gridded structure of the stacked wood and the ragged, irregular forms she unearths.

Born Ursula Karoliszyn in 1942, the fifth of seven children in a family of Polish and Ukrainian peasant farmers, von Rydingsvard spent the first years of her life in a forced labor camp in Deensen, Germany, where her father was conscripted to work during World War II. After the war, the family cycled through eight different displaced persons camps throughout Germany before making their way to the United States in late 1950, eventually settling in Plainville, Connecticut. Money was perpetually tight, and her parents worked long hours—her father in a factory, her mother in a restaurant—so she took care of things at home, all but raising her younger siblings. Later, she followed her high school boyfriend to the University of Miami, where she studied education; after they married, she took his last name and worked as a middle and high school teacher to put him through medical school.

The couple divorced in 1973. Up to that point, art was something von Rydingsvard did on the side, making paintings and small fabric sculptures on weekends in between her teaching job and her work at home as a wife and mother. Only after leaving her husband did she find it possible to pursue an art career in earnest. Later that year, she packed her belongings into a U-Haul truck and moved with her young daughter to Manhattan to begin an MFA in sculpture at Columbia University. In New York, she was a broke single mother living off food stamps and her meager savings, but she often speaks of this period in her life reverentially, as the first time she felt genuinely free. As she said in a 2007 interview, “the seed for making art didn’t really take until I made the decision to gain an autonomous existence.”1

At Columbia, von Rydingsvard initially worked with welded steel, but she was frustrated by the results: the metal was too rigid and unyielding, unwilling to do what she wanted. It also carried the baggage of Minimalism, a movement that she, unlike many of her peers, found uninteresting, with its combination of industrial machismo and cool intellectualism. “The Minimalists took a very conceited position, in which they looked from the top of the mountain down; art had to have a theory,” von Rydingsvard told Fabric Workshop guest curator Mark Rosenthal. “There was no sexiness, and there wasn’t even any humanity.”2

She found a solution in the form of cedar, a material she came upon by accident in 1975, toward the end of her studies, when the painter Michael Mulhern brought a pile of it to her studio. Von Rydingsvard’s attraction to wood has often been explained by invoking the mythology of her childhood—her family’s humble origins in the villages of East-Central Europe, the makeshift wooden structures around which her life revolved in the camps—but the appeal was above all pragmatic: cedar is pliable and forgiving, enabling her to manipulate the components easily to create varied compositions and textures. At the same time, using precut cedar, more typically employed in construction, allowed her to avoid the romantic associations of working with wood. “I tried the tree-trunk thing, and it was awful,” she said in a recent interview. “You can never forget that it’s a tree trunk. . . . These are neutral. They don’t ask anything of you. They’re like a blank piece of paper.”3

THOUGH THE Fabric Workshop exhibition was primarily devoted to the artist’s output of the past fifteen years, it also included a handful of important early sculptures in cedar. In works such as Untitled (Nine Cones), 1976, a group of hollow conical forms arranged on the floor in a three-by-three grid, von Rydingsvard adopted Minimalism’s serial repetition, but attempted to invest it with a greater sense of warmth and emotional weight. The cones vaguely recall casks or barrels in their assembly, each made from thin upright strips of wood joined together and molded into rounded shapes. Though relatively uniform in size, the cones immediately reveal their handcrafted origins in their irregular cracks and bulges, each one punctuated by a rough-edged aperture at the top. Much like Eva Hesse, a frequently acknowledged early influence, von Rydingsvard treats the regularity of the grid as a point of departure, something to be manipulated and made strange, rather than an end in itself.

The breakthrough work Zakopane (1987), which the artist considers to be among her most significant sculptures, alludes directly to her personal history: the title refers to her mother’s hometown in Poland’s Tatra Mountains (it is also the adjectival form of the Polish verb zakopać, to bury).4 Wood projects ominously upward from the top of a wall lined with gray-painted cedar; a row of mottled curving appendages along the work’s lower edge alternately suggests sacks, hanging carcasses, or weathered shovels. Placed on the ground nearby, Ocean Floor (1996) evokes a massive bowl—like shovels, bowls frequently recur in her work—ornamented with bulbous protuberances made from stitched cow intestines. While works such as these have often been interpreted through the narrow lens of biography, von Rydingsvard tends to push back against the notion that her sculptures are direct reflections of her experiences in the camps. Instead, what she takes from her past is a “peasant ethic of economy and resourcefulness,”as David Levi Strauss aptly described in this magazine in 1993: a pleasure in labor, an appreciation for humble materials, and a willingness to make do with what she has on hand.5

The sawed edges of Zakopane’s projecting timbers hint at a decisive shift in her working method that took place in the late 1980s: beginning with Untitled (Seven Mountains), also from 1987—not included in this exhibition—she began to stack the cedar and, using a circular saw, cut into the exposed edges of the beams rather than carving into their faces. She also began to finish the works with powdered graphite. Clinging to the irregular contours of her sculptural surfaces, the graphite exaggerates the geometric faceting, giving the works an almost Cubist quality in both palette and effect.

Today, von Rydingsvard’s approach to construction remains basically the same, though her sculptures have increased significantly in both scale and technical complexity. As “The Contour of Feeling” made clear, her methodical yet intuitive process allows for dazzling range, from the creaturely Droga (2008)—a hollow tubular form sporting a gaping maw, which looks as if it might crawl across the gallery floor—to wall reliefs like thread terror (2016), with diagonal rows of agitated, spiraling lines emerging from a flat rectangular plane. Other recent works seem to play more self-consciously with lightness and weight: for instance, Scratch II (2015), an arching curve bracketed to the gallery wall on both ends so that it frames the space (a similar work from 2016, Nester, was included in the artist’s recent show at Galerie Lelong in New York), or the totemic Coś (2017), whose compact, gridded core modulates into thin, fanning sheets of wood that suggest fluttering fabric.

Over the past several years, von Rydingsvard has increasingly explored materials other than wood. In tandem with the Fabric Workshop exhibition, which emphasized what Rosenthal called the “interior Ursula,”6 the Philadelphia Museum of Art installed two of her recent outdoor works that will remain on view in its sculpture garden through next April. Though both works originated in full-scale cedar models made in von Rydingsvard’s studio, the final casts exhibit a remarkable sensitivity to the particular qualities of each medium. Elegantka II (2013–14/2016), a tall, crystalline spiral cast in blue-green resin, is placed on a grassy mound. From a distance, against a summertime backdrop of lush foliage, it appears almost to merge with its surroundings. By contrast, the commanding twenty-foot-tall Bronze Bowl with Lace (2013–14/2017–18), a shimmering vessel-like form with striations of multicolored patina, stands alone at the center of a small courtyard, often with sunlight streaming through its lacy openwork crown of perforated metal.

The most genuinely shocking of von Rydingsvard’s recent experiments is a new work, PODERWAĆ (2017), produced at the Fabric Workshop’s studios in collaboration with a team of technicians. Suspended from a giant wooden clothes hanger, it takes the form of a cartoonishly oversize leather motorcycle jacket stitched together from the disassembled pieces of nearly two hundred garments sourced from thrift stores. On its own, it feels unresolved, bordering on gimmicky. But exhibited alongside von Rydingsvard’s more familiar sculptures in cedar, it makes for a productively jarring juxtaposition, suggesting the possibility of a latent undercurrent of humor and play in work that has often been considered deadly serious.