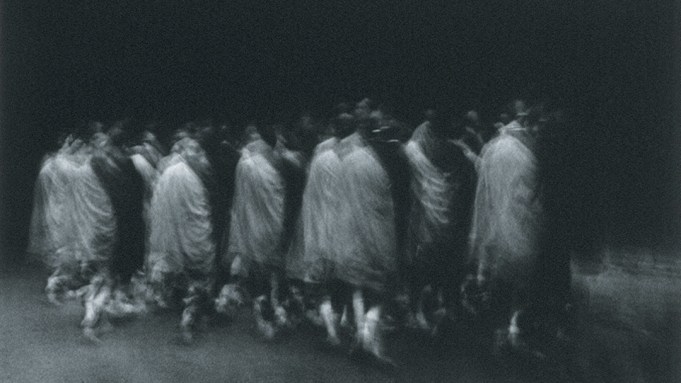 With their predominantly black hue, somber tenor, elaborate accumulations of cumbersome matter and amorphous shapes, the Petah Coyne sculptures installed at MASS MoCA could be aptly characterized as “a tide of darkness.” That phrase, from the final line of a story by Flannery O’Connor, evokes the elegiac mood pervading Coyne’s work over the past three decades. Yet curator Denise Markonish, knowing Coyne’s regard for the overall import of O’Connor’s fiction, instead chose to use the tale’s title for the name of the MASS MoCA show, “Everything That Rises Must Converge.” That assertion reflects O’Connor’s belief, as a devout Roman Catholic, that the Good will converge in the Godhead-a confidence that surmounted the deeply flawed, even bigoted nature of the characters she examined in her Southern Gothic stories. The redemptive struggle of O’Connor’s people is paralleled in the way Coyne’s newer sculptures, less ornate and melancholic than her earlier works, push upward, physically and spiritually, from base materiality. The recent pieces suggest a desire to ascend, free from the weight of the quotidian world, toward a state of beauty, purity and-dare we say it?-transcendence.

Inverting the usual ratio of objects to photographs in a Coyne exhibition, Markonish selected 18 mixed-medium sculptures made since 1989 and 42 silver gelatin prints from 1992-2002. While Coyne’s sculptures, in their material and thematic richness, seem to be the products of a dedicated and intellectually mature artist, her photographs, even those dating from the later stages of her career, reflect a more casual sensibility. The uniformly out-of-focus images-for example, Untitled #1043 (Full Frame Skirt), 2001, a close-up of a whooshing skirt, or Untitled #738 (Monks I), 1992, showing a row of monks running through a forest-are like blurry snapshots enlarged to speckled graininess in a bid for abstract gravitas. Mourning the passage of time in the manner of late 19th-century Tonalist nocturnes, the grayed images convey some of the same sense of loss as Coyne’s sculptures. But compared to those built-up, thought-through works, the photographs appear like quick glimpses-offering only a familiar, instantaneous take on the transitory nature of life.

Among the sculptures, examples from the present decade predominate, bracketed by a few iconic earlier pieces and a huge tour de force that the 57-year-old artist completed in her studio shortly before the opening. The earliest works take us back to the raw propulsive energy of late 1980s Neo-Expressionism, and the playful quality of these semiabstract, vaguely figurative forms invites countless fancies, most of them dark. Untitled #638 (Whirlwind), 1989-a pendulous black-painted conglomeration of clay, muslin and wire, covered by fine black sand (the residue from pig iron casting)-might be seen as a denuded Christmas tree caught in the eye of a cyclone and ringed with wiry lines of force and ornamented with clods; or it might be viewed as a scrawny witch in a cape, stirring a pot so frenetically that globs of dark magical gruel splatter out. Although the huge and hideously bulbous Untitled #670 (Black Heart), 1990, bears a slight resemblance to a Valentine heart, it looks more like an inchoate fusion of botanical, geological, corporeal and excremental components-a malevolent dream made manifest.

Once Coyne shifted to using white wax in the mid-1990s, her work became florid to a degree that recalls Oscar Wilde’s maxim “nothing succeeds like excess.” Pliable and delicate-looking, this material, which appears ephemeral, was in fact specially formulated for her to be exceptionally stable. Since the wax-drenched sculptures dominated Coyne’s oeuvre for about a decade, Markonish’s survey should ideally include a number of the Versailles-gone-mad works, in which chandelierlike forms sport flocks of taxidermied birds or sheaves of candles amid lacy wax-covered branches. The decision to include only a single white construction skews the show heavily, and misleadingly, toward the “tide of darkness” esthetic.

Moreover, Untitled #1093 (Buddha Boy), 2001-03, the sole white wax sculpture shown, is atypical-its mood withdrawn, its potential optimism subdued. Except for the masses of its head, shoulders and torso, the short statue-on-a-pedestal at the core of this piece is almost impossible to discern beneath the thick layers of melted, oozed, swathed and dripped wax. The work is further draped with strands of artificial pearls, covered with silk flowers (themselves dripping with congealed wax) and punctuated by numerous candlesticks. These rococo flourishes festoon a figure standing in a static frontal pose, amid a pool of wax that resembles a long gown, with flowers scattered on the surrounding floor like offerings from devotees. The feeling would be unambiguously reverential, if the seeming acts of piety had not distanced, weighted and greatly obscured the statuette. An elegy for the lost sage is implied, since in Buddhist cultures (Coyne has spent time in Japan and avidly reads contemporary Japanese novels) white is the color of funereal garb and other emblems of mourning.

Buddha Boy may appear to be the material obverse of Coyne’s dark bundled works, much as its decorative fluidity seems hyper-delicate in contrast to their brooding, rough-hewn expressionism. But the two types of sculpture share several key characteristics: an extremely detailed and laborious facture (executed with the help of many assistants), visual exaggeration and the thematic evocation of loss. The emotional intensity of both approaches would be even more evident if Markonish had replicated the original presentation of the sculptures in dense, forestlike clusters in midsize rooms. It would be great to experience again even a portion of the enchantment of Coyne’s “Fairy Tales” exhibition at New York’s Galerie Lelong in 1998: black and brown horsehair pinned on the walls in arabesques or braided into tumultuous rivers that spilled across the floor around bowing, praying figures. The sparse installation at MASS MoCA generally eschews any attempt to re-create such spatial compression, focusing instead on each piece as a discrete object.

But denser installation does prevail in the long, high-ceilinged main gallery, which contains numerous pieces featuring Coyne’s surging cascades of black, maroon and violet wax-covered fabric roses. Visitors at the late May opening remarked how, in several works made since 1997, bright stuffed birds-seeming to tumble helplessly, wings open and legs akimbo, while engulfed within dark blue-black flows of flowers and velvet-immediately brought to mind the catastrophic British Petroleum oil spill. An art historically informed viewer might regard the same installation as a 3-D fusion of Ad Reinhardt’s black monochrome fields with Dutch Baroque painter Rachel Ruysch’s extravagant bouquets of precious blossoms riddled with hyperrealist insects.

A number of works make titular reference to Dante’s Divine Comedy. In Untitled #1205 (Virgil), 1997-2008, the poet’s guide takes the form of a bobcat peeping out from beneath dark flowers; in Untitled #1180 (Beatrice), 2003-08, Dante’s adored lady is veiled in black at the apex of a conical pile of blue-black roses and white taxidermied birds. These verbal and visual links, idiosyncratic as they may be, bespeak an intense identification with Dante’s longing for union with a beautiful, remote beloved and with the spiritual journey of the mortal soul, traditionally symbolized by a small white bird, toward God.

In the monumental centerpiece of this show, Untitled #1336 (Scalapino Nu Shu), 2009-10, Coyne personalized these themes, while moving from a sometimes mannered grandiosity toward the more stable grandeur of Baroque classicism. The subtitle refers to the artist’s good friend Leslie Scalapino, a well-regarded Bay Area poet, and to a secret women’s writing (nü shu) historically taught to girls in a remote area of China, allowing them to communicate from village to village over the course of their lives. Coyne and Scalapino corresponded until the latter’s death on the eve of the exhibition’s opening.

Like Bernini, the foremost sculptor in Counter-Reformation Rome, Coyne employs a sensual lushness in the service of spiritual power. The central element of Scalapino Nu Shu is a 14-foot-high apple tree, the species popularly associated with the biblical Tree of Knowledge. Coyne purchased her tree-bristling with gnarled dark branches that resemble those in Caspar David Friedrich’s painting Man and Woman Contemplating the Moon-where it stood after it had died. She then stripped the tree of bark and leaves, and covered it with velvety black sand. Seventeen taxidermied pheasants, frequently a symbol of nobility (and thus prideful worldliness), hang limply upside down from the branches, signifying death. Perched mostly above them, encircling the tree’s crown, are 10 stuffed peacocks, their glorious plumage folded.

That plethora of magnificent birds might seem to be too much, but their quantities have occult meaning for Coyne, who sometimes draws upon numerological symbolism. Adding the integers of 17 (1 + 7) yields 8, which correlates to an octagon, an intermediate form between a square and a circle, signifying a positive transition or regeneration. The 1 + 0 of 10, then, becomes 1, symbolizing an all-encompassing being, synonymous with light, a mystical center, divinity.1 So to look up from the pheasants to the peacocks on this dark tree is to see beyond death to beauty and transformation.

Contemplating the peacocks, one’s thoughts return to O’Connor, who raised peafowl of both sexes, wrote an essay about peacocks (“The King of the Birds,” 1961) and integrated the creatures into several works of fiction. The many eye-shapes on the male bird’s bright tail have sometimes been associated with God’s omniscience. What’s more, based on the belief that it sheds its feathers in autumn and regenerates them in spring, the peacock became an early Christian symbol of spiritual rebirth. Thus the birds’ positioning in Scalapino Nu Shu relates directly to O’Connor’s theme. The author took her “Everything . . .” story title from maverick Catholic theologian Pierre Teilhard de Chardin, who held that the cosmos is evolving, via growing human self-awareness, toward an ultimate unity in the so-called Omega Point. “Remain true to yourselves,” he wrote, “but move ever upward toward greater consciousness and greater love! At the summit you will find yourselves united with all those who, from every direction, have made the same ascent. For everything that rises must converge.”2

Comparing the massive tree in Scalapino Nu Shu with the huge dead magnolia in Coyne’s Untitled #628 (1989)-a work (not in the show) weighted with clunky teardrop clods made out of hay, rope, tar, paint, cable and wire-illustrates how the artist has remained true to herself. She still utilizes natural forms. She still embraces the dark, both coloristic and metaphorical. But now she also strives for the light-i.e., higher consciousness, visual majesty and spiritual uplift-through an art that is ever more comprehensive and refined. In “Everything That Rises Must Converge,” O’Connor has a character echo Teilhard by remarking, “If you know who you are, you can go anywhere.” That pronouncement might well serve to epitomize Petah Coyne’s ever-evolving art and career.

1 Numerological analysis by the author, who confirmed her findings in a telephone conversation with the artist, July 28, 2010.

SUZAAN BOETTGER is an art historian, critic and lecturer who lives in New York City.