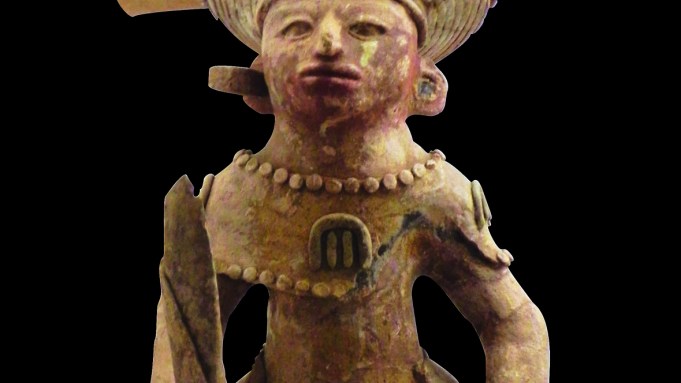 As the art-world spotlight shines on Philadelphia this weekend in anticipation of the Barnes Foundation debut in center city, several other local art institutions are hoping to divert some of the visitor influx with  events and exhibitions. Not far from the Barnes, the Pennsylvania Academy of the Fine Arts (PAFA), housed in the famous 1876 Frank Furness-George W. Hewitt Victorian Gothic extravaganza, hosts “PAFA and Dr. Barnes.” This focused exhibition examines the intimate and complex relationship between the Academy and the eccentric—and prescient—Philadelphia-born collector Albert C. Barnes.

Organized by Robert Cozzolino, PAFA curator of modern art, the exhibition corresponds to a critically reviled 1923 show at the Academy, which featured 75 paintings and sculptures loaned by the multimillionaire collector, who made his fortune from Argyrol, a gonorrhea treatment. The well-traveled Barnes, who spent much time in Paris, intended to introduce Philadelphians to the most innovative art of the day, including modern painting and sculpture as well as African art, pre-Columbian textiles and Native American pottery. For the show, he loaned the Academy top-notch works by Cézanne, van Gogh, Picasso, Matisse, Modigliani and many others. But the exhibition was savaged in the local press and was generally mocked by the public who found the avant-garde grating and outrageous.

The bashing was instrumental in convincing Barnes never to loan the works again. Instead, he set up a private institution in the Philadelphia suburbs to show the collection. A lucky few could successfully apply to see the works only after subscribing to an intensive art-education program. Thus, until this weekend, his collection has been sequestered away in suburban Merion, Pennsylvania, and has had limited public exposure. If the PAFA show almost 90 years ago had been better received, things might have been a lot different.

Cozzolino doesn’t attempt to replicate the 1923 exhibition, since most of the major works from that show are, of course, now on view in the new Barnes museum. Instead, he centers the display on the American Ashcan School painter William J. Glackens, a former PAFA student, who was Barnes’s friend and principal advisor in his collecting pursuits. Painter and PAFA faculty member Arthur B. Carles, who Barnes admired and collected in depth, is also a central figure here. “We assembled the types of works by American artists that Barnes and Glackens sought for the collection,” Cozzolino said during a press walkthrough. Most of the pieces are from the Academy’s holdings, although a number of examples are on loan, including a haunting Jules Pascin nude that was once owned by Barnes. There are other outstanding examples on hand by Charles Demuth, Horace Pippin and Charles Prendergast.

PAFA is also featuring works by a number of contemporary artists, including one gallery occupied by Bill Viola’s three-screen video installation Ocean Without a Shore (2007), and a show of two-dimensional works and an installation piece with music by Cynthia Norton, a young artist from Kentucky. Also on view is a tribute show to Chicago Imagist Ray Yoshida (1930–2009).

The usually sedate Penn Museum on the University of Pennsylvania city campus is hoping to ride the Barnes coattails with a mini-blockbuster of its own. “Maya 2012: Lords of Time,” on view through Jan. 13, 2013, is actually a scholarly affair disguised as a crowd-pleasing blowout focused on the end of the world—scheduled for later this year, at least according to the ancient Maya, some experts insist. The show begins with some garish and noisy video clips of apocalyptic scenes from well-known Hollywood movies and high-tech interpretations of the Maya calendar. But the show eventually eases into several quiet displays of gorgeous, recently unearthed ceramic vessels and figurative pieces from Honduras, which are at the exhibition’s core.

Along the Benjamin Franklin Parkway, within walking distance from the Barnes Foundation, the Philadelphia Museum of Art and the Rodin Museum are busy sprucing themselves up to impress the new neighbor. At the far west end of the boulevard, the latest addition to the city’s robust park system, the Sister Cities Park, recently opened with some lush greenery, a café and a new modernist fountain that kids can frolic in during steamy summer days. Also focusing outdoors, the Philadelphia Museum of Art has installed a sprawling formal garden, Lines in Four Directions in Flowers, designed for the hillside behind the museum by the late minimalist Sol LeWitt. The museum also features a striking installation of large bronzes by Cy Twombly in its adjacent Perelman Building while it mounts a major summer offering, “Gauguin, Cézanne, Matisse: Visions of Arcadia,” on view in the museum’s main building, June 20 –Sept. 3.

The Barnes’s next-door neighbor, the ornate Rodin Museum is getting a facelift and thorough cleaning. In addition, newly redesigned gardens by landscape architect Laurie Olin are already in bloom. Olin worked with architects Tod Williams and Billie Tsien to create a convincing nature setting for the modernist Barnes Foundation building. When the Rodin Museum reopens on July 13, it will likely present an architectural counterpoint and verdant complement to its brand new neighbor.