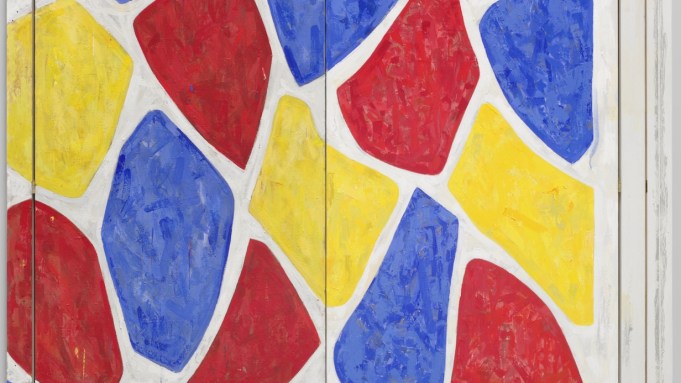 Works by Jasper Johns, Ellsworth Kelly, Gerhard Richter and Steve McQueen figure in a major gift announced yesterday by the Philadelphia Museum of Art. Collectors Keith L. and Katherine Sachs have promised 97 artworks from their renowned contemporary art collection. Museum director Timothy Rub describes the gift as comparable to major donations by Albert E. Gallatin and Louise and Walter Arensberg in the 1950s. An exhibition of the Sachs collection will be mounted in 2016.

“The Sachs collection reinforces and expands the scope of the museum’s holdings of contemporary art and will enable us to present to our audiences a more comprehensive view of the art of the past half century,” Rub said in a press release. The museum has also announced that it will rename its modern and contemporary art galleries in honor of the couple.

The collection comprises works in various mediums by artists ranging from Johns to Allora & Calzadilla. It includes the first works to enter the museum’s collection by Carl Andre, Richard Serra, Georg Baselitz, Tony Smith and Piero Manzoni. Other parts of the gift complement existing areas of the museum’s holdings, including examples by Johns and Kelly.

Among the collection’s areas of focus are video art, with artists such as Bill Viola, Pierre Huyghe and Steve McQueen. Photographers whose works appear in the collection include Andreas Gursky, Thomas Struth, Candida Höfer, Jeff Wall and Thomas Ruff. Outdoor sculpture is represented by artists including Serra, Tony Smith, Richard Long and Charles Ray.

Four works are already on view, including examples by Johns, Kelly and Joseph Beuys.

The couple have long been supporters of the museum; Keith Sachs has served as a trustee since 1988, and Katherine Sachs has worked in the museum’s public relations department and contributed to many exhibition catalogues. Until January, Keith Sachs was CEO of Saxco International, which distributed packaging for alcoholic beverages.