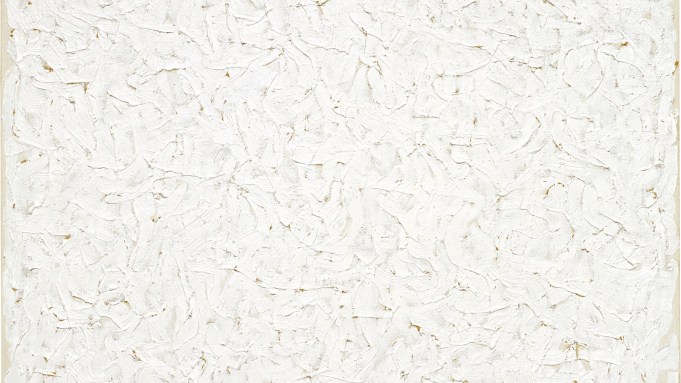 Two weeks of New York art auctions, some of them blockbusters, drew to a close Thursday night at Phillips in a tame 70-minute affair totaling $52 million, just above the low estimate of $46 million. The night’s top sale was a 2001 all-white canvas by Robert Ryman, which brought $5 million to an unnamed bidder via telephone. The same sale last year tallied just over $68 million.

“People are so tapped out,” New York art advisor Kim Heirston told A.i.A. as the sale wound down. Die-hards like New York dealers Marianne Boesky, Dominique Lévy and Christophe van de Weghe turned up, as did advisors like Philippe Ségalot, though there were pockets of empty seats even in the front rows. Christie’s New York had staged a tough act to follow: a record $853-million sale Wednesday night that included two works by Andy Warhol and one by Cy Twombly that each brought more than Phillips’s entire sale.

Elaine Sturtevant, the recently deceased proto-appropriation artist who is the subject of an exhibition that opened last week at New York’s Museum of Modern Art, spurred lively bidding, perhaps fueled by an auction record of $3 million that had been had been set at Christie’s on Wednesday. Her black-and-white Frank Stella-esque enamel on canvas, Stella Tomlinson Court Park (First Version) (Study), 1990, went for $550,000, soaring past a $150,000 high estimate. The same work brought about $34,000 at a day sale at Sotheby’s New York in 2009.

The most unusual lot of the night was its final one—a work commissioned by art collector Francesca von Habsburg consisting of a treasure chest and map revealing the locations of booty hidden on the remote Isla del Coco off the shores of Costa Rica. Proceeds will go to support protection of local wildlife. The loot includes 40 unseen works by artists like Marina Abramovic, Raymond Pettibon, Ryan Trecartin, Lawrence Weiner and Olafur Eliasson. It was the sale’s last lot and sold in a quickly emptying room to a telephone bidder for $150,000, the low estimate.