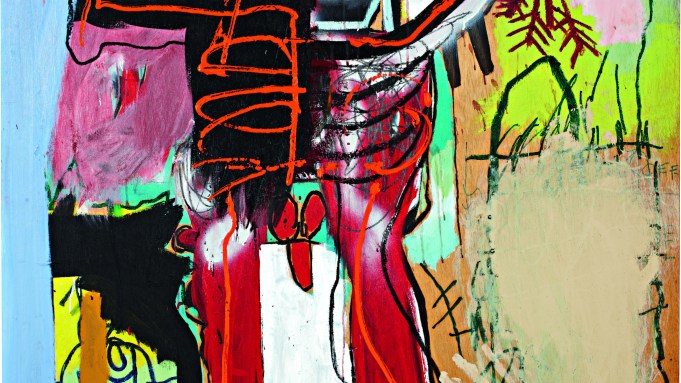 Phillips de Pury & Company rounded out New York’s May evening contemporary art auctions with strong results last night, bringing in $86.9 million. This was within the projected range, and 80% of offerings found buyers. Three works sold in excess of $10 million, and a Jean-Michel Basquiat painting fetched $16.3 million, setting a record for that artist, as did works by Seth Price and Dana Schutz.

The Basquiat sold well above its $12 million high estimate, with three phone bidders in competition, according to a Bloomberg report. The 1981 painting on wood, from when the artist was only 21, shows a life-size figure, arms aloft and sporting a spiked black halo recalling a crown of thorns. The work was consigned by Washington, D.C., collector Robert Lehrman.

Willem de Kooning’s Untitled VI (1975), an abstract canvas predominantly in shades of pale pink, brought $12.4 million. A Warhol Mao from 1973, showing the Chairman with a glowing pink face and overlaid with gestural brushstrokes in blue, commanded $10.4 million to become the night’s third-priciest offering.

Setting an auction record for Price was an untitled sculpture from 2009, which climbed to $92,500. The 8-foot-high work presents a frayed length of rope encased in a vacuum-formed sheet of polystyrene. Ironically in view of skyrocketing prices for art in this month’s auctions, the work is described in the sale catalogue as a comment on “manufactured desire.”

Schutz’s Death Comes to Us All (2003) brought a record $482,500. Prices in her current show at New York’s Friedrich Petzel Gallery (through June 16) are listed up to $120,000. The 10-foot-high canvas shows a cigarette-smoking figure, standing in a parking lot, whose top half dissolves into a flurry of strokes that create a birdlike shape.

The results follow record-setting sales earlier in the week at Christie’s and Sotheby’s.