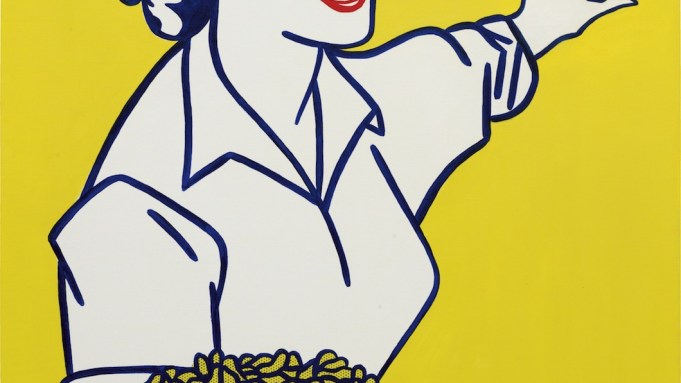 Starting off a busy week of postwar and contemporary art auctions, last night’s contemporary art sale at New York’s Phillips auction house tallied just over $68 million, just above its low estimate. Phillips usually holds its sales the Thursday night after the larger sales at Christie’s and Sotheby’s. Hoping to get collectors before their coffers were empty, the house re-scheduled the sale at the last minute to Monday. Eighty-eight percent of 40 lots sold, compared to 83 percent last year, and the night saw five new auction records for artists including David Hammons, Nate Lowman and Jacob Kassay.

The priciest sale of the evening was Roy Lichtenstein’s 1962 oil painting Woman with Peanuts, which went for $10.8 million, just above its low estimate. Andy Warhol’s silkscreen Nine Gold Marilyns (Reversal Series), 1980, achieved second place, selling near the low end of its estimate at $9.1 million with buyer’s fees. New York dealer David Zwirner picked up an untitled David Hammons sculpture from 2000, a glittering hybrid of basketball hoop and wall chandelier, for $8 million, setting a new record for the artist. Zwirner was also the sole bidder for Buster Keaton (1988), a 5½-foot-tall wooden sculpture by Jeff Koons, who had his first show at Zwirner’s Chelsea gallery last spring. The sculpture shows the actor astride a miniature horse. Zwirner paid $4.4 million.

Young artists also sold well, with Lucien Smith setting an auction record alongside Kassay and Lowman. Smith’s large 2011 painting Hobbes, The Rain Man, and My Friend Barney/Under the Sycamore Tree fetched $389,000, more than double the $185,000 high estimate. Lowman’s oil-and-alkyd painting Trash Landing Marilyn #12 (2011) sold to a telephone bidder at the $725,000 high estimate. Colombian-born painter Oscar Murillo, another new Zwirner artist, closed the night out garnering multiple bids for a 2011 untitled abstract painting with the word “pollo” written across the bottom. It went for $293,000, well over the $185,000 high estimate. (All prices include buyer’s premiums.)

The evening’s biggest disappointment was Mark Rothko’s Untitled (Black on Gray), 1969-70, estimated at $10 to $15 million, which failed to attract any bids.

Works by other established artists also failed to sell, including a 1969 untitled work on paper by Cy Twombly that had been estimated at $900,000 to $1.2 million, and a Jean-Michel Basquiat untitled drawing from 1982. Wayne Thiebaud’s Traffic Lanes (1982) also went begging. When asked about the Rothko, Michael McGinnis, Phillips C.E.O., said there had been pre-sale interest that simply “didn’t materialize.”

“It was a surprise,” said McGinnis. “We felt confident before the sale.”

McGinnis characterized the evening’s results as “pretty predictable,” noting that buyers were principally American and European with some Russians. He confirmed that there was little participation from Asian bidders. The room was filled with gallerists and collectors, including Aby Rosen, Larry Gagosian, Bill Powers, Mera Rubell, Andrew Fabricant and Robert Mnuchin.

Christie’s and Sotheby’s follow with their sales of postwar and contemporary art tonight and tomorrow night, respectively. Christie’s sale is estimated to bring $500 to $700 million; Sotheby’s expects to ring up as much as $424.6 million.

This Exceptionally Rare Roger W. Smith Series 2 Is Expected to Reach $400,000 at Auction