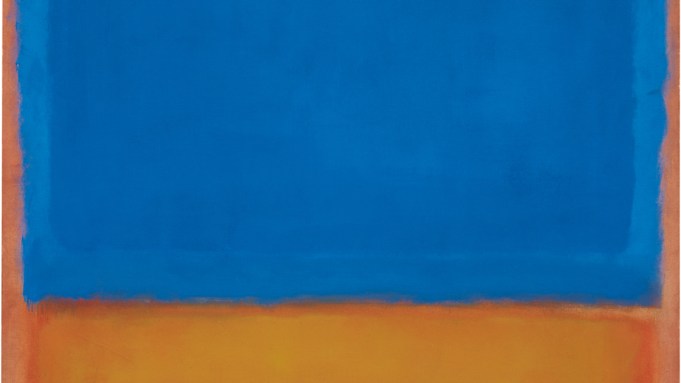 New York’s spring evening sales concluded Thursday with a $131 million contemporary art sale at Phillips, led by Mark Rothko, Jean-Michel Basquiat and Andy Warhol. Records were set for Tauba Auerbach ($1 million), Dana Schutz ($482,500) and Warhol and Basquiat working together ($10.5 million). The total was just above the $125 million low estimate for the night. There were pockets of empty seats on the floor, but glamour above, where visitors could see Leonardo DiCaprio in his skybox, as the boutique house sold 37 of 46 lots in less than 90 minutes. Last year’s auction of similar material totaled $78.6 million.

“It was an admirable sale,” New York art advisor Kim Heirston told A.i.A. as the final hammer came down.

As anticipated, Rothko’s 1955 color field painting Untitled (Red, Blue, Orange) was the evening’s top lot, fetching $56 million after three slow bids from the telephones.  The winning offer, taken by August Uribe, who joined Phillips as worldwide co-head of contemporary art in January after 22 years at Sotheby’s, just met the low estimate. Like 10 other lots in the sale, the Rothko carried a guarantee, meaning the seller was promised an undisclosed amount regardless of the sale’s outcome. Phillips had promoted the Rothko painting with an individual 55-page catalogue. Its sale represented almost 50 percent of the house’s hammer-down total for the evening and earned the seller a tidy profit, having last traded hands in 2007 for $34.2 million.

The evening’s number two sale at $11.4 million was Warhol and Basquiat’s 9-by-22-foot painting Zenith (1985), which went to a telephone bidder. Dominated by a large skull at right, a convertible at the bottom and a white goat at left, the painting accommodates Basquiat’s graffiti style and Warhol’s commercial silkscreening. Warhol also produced the night’s third- and seventh-priciest lots: Flowers ($10.2 million) and Jackie ($3 million), both 1964.

“The pacing was good,” Heirston said, “and there were a few great lots at the end.” She had unsuccessfully pursued the final lot of the evening, an energetic untitled 2012 work by 28-year-old, London-based market phenom Oscar Murillo. The painting has scribbles in oil stick in its upper third and the word “Pollo” in fuchsia occupying the bottom. It sold to a telephone bidder for $320,000, more than doubling its $150,000 high estimate.  Murillo currently has an exhibition at Chelsea’s David Zwirner Gallery.

Phillips’ sale followed evening auctions Monday and Tuesday at Christie’s and Wednesday at Sotheby’s; Tuesday’s sale achieved the highest auction total in history, at $745 million. But fatigue was not a problem, maintained Phillips CEO Michael McGinnis at a post-sale press conference. McGinnis described bidding as vigorous, and said that participation was global, including Asia, South America, Central America, the U.S. and Europe.

In past seasons, Phillips has customarily followed the evening contemporary art sales at Christie’s and Sotheby’s. In November, the house shifted its sale from Thursday to Monday, hoping to catch collectors before they had spent their cash at the larger houses, and had planned to hold its sale on Monday this year. But it was crowded out by Christie’s “If I Live I’ll See you Tuesday” auction, emphasizing younger artists and aiming to recruit younger buyers, which slightly exceeded estimates, totaling $134.6 million and setting 11 auction records.

Featuring the work of younger artists has traditionally been Phillips’ strength. Murillo’s contemporary Lucien Smith sold squarely within the estimate for his 2011 painting Double Date, which brought $137,000 as the artist opened his first show at Skarstedt Gallery, just a short cab ride away. Nate Lowman’s Skidmark Altima (2005) went for $485,000, meeting its high estimate and besting the $365,000 a very similar Lowman work earned at Christie’s day sale Wednesday.

“There were a few disappointments tonight,” McGinnis conceded. Among the unsold works were Mark Tansey’s 1987 painting Coastline Measure, estimated at up to $4.5 million, and Warhol’s Four Self Portraits-Blue Green (Reversal Series), 1979, estimated at up to $6 million. The less expensive of two Gerhard Richters failed to find a buyer, as did David Smith’s 1946 sculpture Abandoned Foundation (Landscape), estimated at $1.2 million to $1.8 million.

Phillips awaits the arrival of new CEO Edward Dolman this July. While the house has committed, according to McGinnis, to a Monday night sale to kick off New York’s fall contemporary auction week, no decision has been made beyond that. “I like alternating,” McGinnis added, “and the great results at other houses this week helped us.”