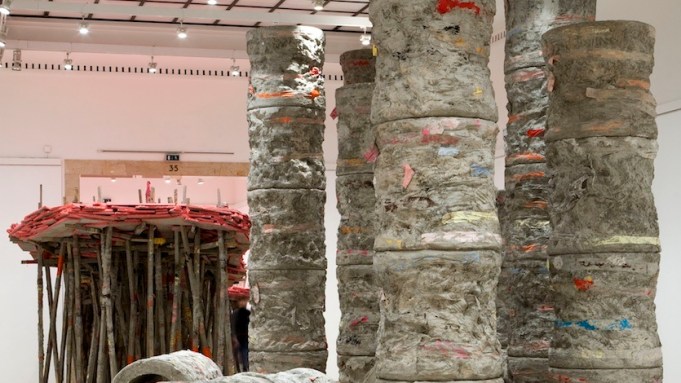 London’s Phyllida Barlow (1944-) is the latest artist to be honored in Recognition of Art by Women (RAW), a series of annual solo exhibitions featuring living women artists at the Norton Museum of Art, West Palm Beach, Fla. “Phyllida Barlow” will open in December and run through March 2014, and will include the artist’s signature large-scale sculptures and installations crafted from repurposed materials.

The show is organized by Cheryl Brutvan, director of curatorial affairs and curator of contemporary art at the Norton. Barlow will work in residence at the Norton to create site-specific works for the exhibition, which will also feature pieces that have never previously appeared in the United States.

Hope Alswang, the Norton’s director and CEO, praised Barlow’s selection in a press release, saying, “Her work since the mid-1960s has pushed the boundaries of the medium. From her use of industrial materials like concrete and wooden pallets to her playful sense of formalism, Barlow has redefined what sculpture can be and personifies the mission of RAW-to promote the work of contemporary female artists who revolutionize their mediums.”

Currently in the third year of a planned six-year series, RAW is funded by a grant from the Leonard and Sophie Davis Fund/ML Dauray Arts Initiative. To date, the series has included British painter Jenny Saville, in 2011, and American landscape artist Sylvia Plimack Mangold, in 2012.

Zora Hits Back at Anti-Trans Bills With Defiant New Pop Single ‘All Around the World!’

Who Won the Console War? The Ultimate Guide to Buying the Best Gaming Console in 2022