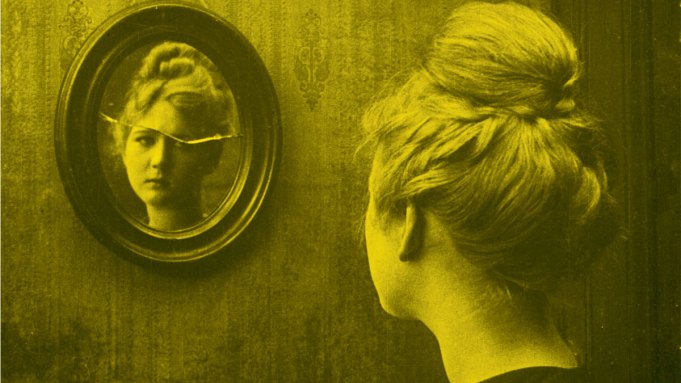 The early American director Lois Weber (1879–1939) was drawn to the notion that people in a movie could interact with spirits, angels, and ghosts. In the hundreds of silent films she made between 1911 and 1927, only a fraction of which survive, there are frequently two levels of action: an earthly one in which seducers prey on vulnerable women, marriages form and collapse, and churchgoers lie about money and sex; and a spiritual one from which varied forces oversee those developments with benevolent or hostile designs.

Sometimes, through the superimpositions and double exposures of which Weber was an acknowledged master, the two levels overlap. When they do, it is often to drive home a moral lesson. In Hypocrites (1915), a translucent figure called Naked Truth—played by a young woman in a sheer body stocking that scandalized audiences in Cleveland and Boston—confronts a series of devout parishioners with a small pocket mirror that exposes their sins. (Each time she holds it up, Weber fades to a clip of some corruption or impropriety.) The mute, seduced heroine of Weber’s historical epic The Dumb Girl of Portici (1916) ascends to heaven after stepping between her lover and her brother’s sword; the impoverished, seduced heroine of Shoes (1916) tosses in bed under a hovering, claw-like male hand on which “poverty” is scrawled. In a queasy anti-abortion fable, Where Are My Children? (1916), the winged spirits of “unwanted” infants pass between heaven and earth. In the script for a lost film, Even as You and I (1916), Weber’s biographer, Shelley Stamp, tells us, double-exposed “allegorical figures of Lust, Drink, and Self-Pity threaten an artist and his wife as they compete with Truth, Honor, Love, and Beauty.”1

Weber was both one of her country’s most influential silent filmmakers—a 1915 newspaper profile boasted that, after D.W. Griffith, she “ranked as second among American photoplay directors”—and one of its hardest to classify.2 She came to prominence in the early 1910s, during what historian Karen Ward Mahar has called “the most promising moment for women in the history of the American film industry.”3Actresses like Marion Leonard and Gene Gauntier launched second careers as directors; “serial queens” like Helen Holmes surfed trains in daredevil adventure films; Mabel Normand, one of several slapstick comediennes who emerged in these years, was Chaplin’s early rival. 4

The movies were still a young business. They had come under scrutiny from middle-class reformers, religious groups, and the new National Board of Censorship for the immoral behavior they might encourage, and studios like Universal depended on respectable married women like Weber (she was billed as co-director on many of her films with her deferential husband Phillips Smalley) to show skeptics that movie theaters could be sites of moral “uplift” rather than houses of pleasure or sin. In public, these filmmakers were expected to seem at once wise and demure. The pioneering director Alice Guy Blaché argued in 1914 that women ought to make good filmmakers because they were “naturally religious” and blessed with “authority on the emotions.”5

On the screen, women could be politically adventurous as long as they kept a sufficiently ladylike cover. The reversal of gender roles could be imagined—as in Guy’s 1906 short The Consequences of Feminism or her 1912 lost film In the Year 2000, which, according to a Moving Picture World bulletin, predicted “what will be when women shall rule the earth and . . . men shall be subordinates and adjuncts”—but usually only through a layer of bemusement. 6

Weber quickly grasped how best to promote herself under these conditions. “My close study of the editorial page,” she told a journalist, “has taught me that it speaks with stentorian tones and that its effect is far reaching upon thousands of readers.”7 It was a reach she aspired to. The following year, she insisted to another reporter that moviegoers “want pictures with sermons.”8

Contemporary scholars puzzle over how sincerely these announcements were meant. A similar ambiguity attends the films themselves, in which matronly lessons about family, faith, and virtue sit beside hinted-at critiques—of the home, of the workplace, of gender roles—that seem to undermine them. Like the middle-class social reformers among whom she moved, Weber worked comfortably within those contradictions. What set her apart was the force with which religion seemed to fire her mind. Faith for Weber often seems to have been less a cloak for subversive social messages (to use Stamp’s metaphor) than an outfit she wore with startling confidence and nerve.

Little is known about Weber’s religious upbringing in Pittsburgh, where her father was an upholsterer. As a teenager, Stamp relates, she “joined a ‘church army’ group that toured the city’s red-light district with a small street organ and a hymnal.”9 She enjoyed writing and drama, including “performing ballads in church.” When she entered show business as a singer, her grandmother warned her that she would have to forgo religion in her “worldly career.” Instead, she doubled down on her work as an evangelist, in the course of which she visited soldiers’ quarters and Blackwell’s Island, the site of New York City’s first mental asylum. She liked the movies, she said in 1914, because they let her “preach to my heart’s content.”10

Two pristine new restorations of The Dumb Girl of Portici and Shoes suggest how hard it can be to say what Weber preached. Shoes runs fifty-two minutes. It centers on Eva (Mary MacLaren), a teenage shopgirl who supports her family while her lazy, unemployed father stays home. Eva is so desperate for a new pair of shoes—hers are falling apart—that she submits to the advances of a predatory customer in exchange for the money to buy them. She comes home the next morning disgraced, “the worm of poverty,” an intertitle informs us, having “entered the folded bud and spoiled it.” Her oblivious father, meanwhile, struts into the family kitchen to announce that he’s finally found work.

Drawn from the research of the social reformer Jane Addams and from a 1916 Collier’s short story by Stella Wynne Herron but informed, Weber insisted, by her own missionary work, Shoes is a compressed, taut, fervid movie. It burrows into its heroine’s private moments: her nightmares; her dashed hopes for the future (a late fantasy scene shows us the marriage she’ll now, we gather, never have); her charged encounter with her own reflection as she sizes herself up for the first time, in Stamp’s words, “as a marketable commodity.”11

The result is an unstable object, dense with mixed messages. Was Weber advocating that women should stay in the workforce but earn fair wages, or chastising indolent men like Eva’s father for forcing their daughters to leave their rightful place in the kitchen? Does the movie propose emancipating Eva or just relocating her from the workplace to the home? It might well be, as Stamp suggests, that in Shoes Weber had a “radical critique” of women’s wage inequity to make but swathed it “in a conservative appeal” to innocence and family.12She would have had to. The year before Shoes appeared, the Supreme Court voted unanimously to deny films free speech protections on the grounds that they were “capable of evil,” which Mahar argues “encouraged the film industry to reject” moral uplift movies with “controversial themes” like Weber’s.13

She might also—and these are not mutually exclusive—have been serious when she connected her filmmaking to her early evangelism. Weber had a burning religious imagination. When she depicted lurid behavior, it was often with the excess and fascination of a preacher describing the flames of hell. Her gift for such scenes can be glimpsed in the rambunctious cabaret (The Blue Goose) in Shoes, where fat men chomp cigars and women in feathered hats guzzle wine straight from the bottle, or the tableaux of greed and lechery Naked Truth’s mirror discloses in Hypocrites.

It reached an especially intense pitch in The Dumb Girl of Portici, an adaptation of Daniel Auber’s romantic opera from 1828 about a seventeenth-century peasant revolt in Naples that briefly overthrew the kingdom’s Spanish viceroys. The film turns on the famous Russian dancer Anna Pavlova’s one screen performance, as an Italian peasant girl seduced by a Spanish nobleman in disguise; her betrayal incites her brother, a fisherman, to lead an insurrection.

By the early 1920s, Hollywood was forcing out its female directors. Power gathered around a smaller cohort of men; stricter conventions for screenwriting and production replaced, in Mahar’s words, “the impromptu collaborative style of filmmaking” that had benefited women in the 1910s.14

Weber, meanwhile, was under pressure to dampen what the press now called her “simplified sermons.”15 Since 1917, she had been running her own production company, and her style had drifted closer to a subtle, mellow naturalism. The Blot (1921)—which appears in a lovely restoration on Flicker Alley’s recent home video anthology Early Women Filmmakers—was one of the last films she made under Lois Weber Productions before the company closed. A melancholy drama, it scrutinizes the respective kitchen setups and living-room furnishings of an underpaid professor’s family, the prosperous German shoemaker who lives next door, a poor clergyman, and the rich son of a college trustee.

The echoes are hard to overlook between Weber’s own position in Hollywood and this film insisting that Americans ought to provide for the teachers and preachers, in the words of one of its intertitles, “who fed their souls and clothed their minds.” She was making a plea for the vanishing style of morally edifying filmmaking she had practiced in the previous decade. But the film’s subdued, restrained style also pointed to another vanished resource: the wild evangelical imagination that seeped out of Weber’s earlier work.

Under the new studio regime, there was no going back to a mode of filmmaking that smelled so much like brimstone and hellfire. That mode had to migrate to the margins, where it soon reemerged, notably in religious-themed “race films” by African American filmmakers like Spencer Williams or the married traveling ministers James and Eloyce Gist.16

Whatever hopes you pin on Weber, she is bound to let you down somehow. She had too strange a vision to be the reliable reformer Progressive viewers wanted during her career: Hypocrites was banned in Ohio, and Where Are My Children? initially ran aground at the National Board of Review. Her Christian values, meanwhile, run too deep for her to serve as the smuggler of deviant ideas we might now wish she’d been. She did, however, exemplify a time when women had power in Hollywood and bristling, heterodox sensibilities like hers could attract audiences like the sold-out crowds that kept Hypocrites playing for weeks in New York and LA. That film earned more than seven times what it cost to make.17 Few filmmakers since have had such an enviable position from which to craft a view of human life as a site of active spiritual warfare. She saw her chance and she took it.

16. Work by Williams and the Gists can be found on the invaluable DVD and Blu-Ray collection Pioneers of African-American Cinema, New York, Kino Lorber, 2015.