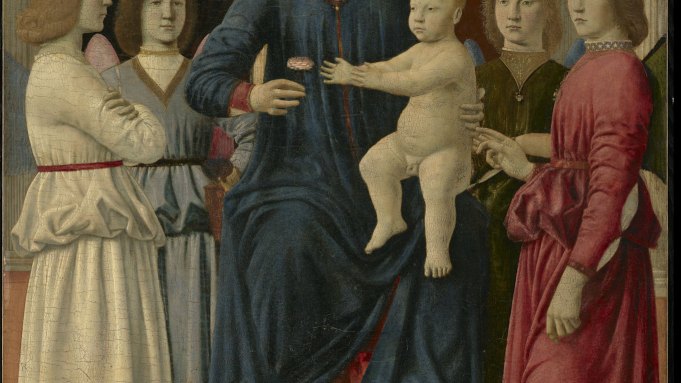 Paintings by the early Renaissance maestro Piero della Francesca (ca. 1413-1492) are fragile and scarce. Most are held in Italian churches and European museums that almost never lend them for exhibition, especially abroad. So this gathering of seven key examples of his work at New York’s Frick Collection [“Piero della Francesca in America,” on view through May 19] is a unique event. Though modest in scale, it constitutes the first-ever monographic Piero show in this country.

Earlier pioneers such as Giotto heralded the end of the Gothic era in Italy, which was characterized by schematic imagery and affected forms and expressions. But Piero’s work, with its naturalistic figures and refined perspective—plus his use of the then-new medium of oil paint—defines the beginning of the Renaissance style, which ultimately transformed the way Europeans perceived the world. Piero was also a true Renaissance man with a keen interest in geometry and architecture, and he wrote three treatises on painting and mathematics. The works on view in this show, organized by guest curator Nathaniel Silver, appear fresh and modern in many respects.

“In the course of putting the exhibition together,” Silver told A.i.A., “I was delighted to find out that Piero has a huge fan club in America. His paintings are so rare but I wanted to offer the public a concentrated view of his work. Most often, the paintings are shown surrounded by work of his contemporaries, but they don’t sit well together. Piero’s subtle lighting and carefully nuanced details are compromised. Though there are only seven paintings here, it’s a total Piero experience.” The exhibition also encompasses a fascinating study of art patronage, attribution and institutional acquisition of these much-coveted works, discussed in depth in the show’s excellent catalogue.

Dominating the Frick’s Oval Room, where the exhibition is installed, the large oil-on-panel Virgin and Child Enthroned with Four Angels (ca. 1460–70), is the best-known work here, on loan from the Sterling and Francine Clark Art Institute in Williamstown, Mass. It demonstrates all of Piero’s best attributes, and remains for some an effective object of veneration. Painted in delicate tones of pale pink, blue and gray, the tranquil scene takes place on the portico of what appears to be an ancient Roman villa or temple. Four youths accompany the seated Virgin, the composition’s focal point. Seated on her lap, the naked Christ Child (with a serious adult expression on his face) reaches for a delicately rendered flower his mother holds in her hand. On each side, two handsome youths could be ordinary citizens of Borgo San Sepolcro, Piero’s home town, were it not for the pink, blue and green angel wings visible behind their shoulders.

Flanking this arresting painting are two large oil and tempera panels each depicting a biblical subject: Saint John the Evangelist (ca. 1454–69), from the Frick’s collection on the right, and, on the left, Saint Augustine (1454–69) from the Museu Nacional de Arte Antiga, Lisbon, making its U.S. debut. The painting shows a stoic, bearded figure holding a crystal staff and wearing a cloak elaborately embroidered with scenes from the lives of other saints. According to the catalogue, the late British scholar and TV host Kenneth Clark recognized the painting as Piero’s work relatively recently, in 1947.

Across the room, a wall illustration helps to imagine how these two paintings of saints were originally situated high up in the vaulted niches of Piero’s altarpiece of the Church of Sant’ Agostino in Borgo San Sepolcro. Rounding out the exhibition are four small works, including the Frick’s gemlike Crucifixion (1454–69), and three more images of saints. One is believed to be a representation of Saint Leonard, another, Saint Monica, and the most intriguing, Saint Apollonia. This work, loaned by the National Gallery in Washington, D.C., shows the 3rd-century AD saint in a blue-gray dress and red cloak, set against a gold-leaf background. The pair of tongs grasping a tooth that she holds up refers to her martyrdom, when imperial guards in Alexandria broke all of her teeth. Her sympathetic face with a determined and dignified expression is certainly compelling—and pure Piero.

The Frank Lloyd Wright Suite at This Tokyo Hotel Is a Midcentury Modern Fever Dream—and It’s Available for $10,000 a Night