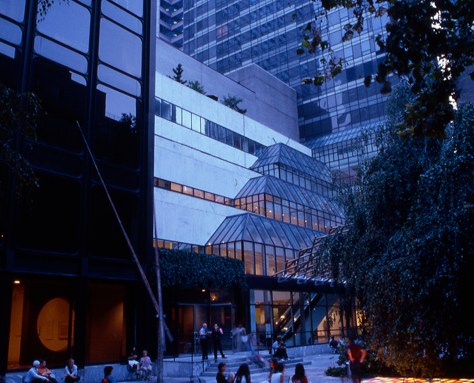 Having installed a multicolored luminescent dance floor, Untitled (Dance Floor) (2000), on MoMA’s outdoor terrace in 2000, the Polish-born artist Piotr Uklanski took to a supplementary leaflet to offer a self-evident polemic: “Entertainment/art-please tell me what the difference is.” Since the 1990s, Uklanski has made a career out of that thin line. With an almost Duchampian disregard for art with a capital A, he’s infiltrated museum and gallery spaces with the guilty pleasures of consumer culture-pop music, cinema, commercial imagery. For Untitled (Twin Moons) (1999), he tethered a giant, floating helium balloon filled with tungsten light to PS1. Untitled (The Full Burn) (1998) featured a man at MoMA briefly bursting into theatrical flame-effects. And with his iconic dance floor, whose thumping dance music and tacky design offered a gauche retort to the museum’s cool, modernist genealogy. The work looked to create common social space and unearth vested spatial issues of class.

AiA talked with Uklanski about the fiber arts, parody in painting, and go-go dancing.

DAVID EVERITT HOWE: This new work shares an interesting formal affinity with Sergej Jensen, who has an exhibition currently at PS1. I don’t feel like his work is a deconstruction of modernist painting that way yours is. What’s interesting is that you’re approaching painting from craft, or textile, traditions.

UKLANSKI: I haven’t seen his show yet. I should see it. I too did a few woven pieces in the past-for instance, the large textile painting, Untitled (The Year We Made Contact) (2010), in the 2010 Whitney Biennial. A year before in London at Gagosian Gallery I showed a large textile work: Untitled (Monster) (2009), composed of large, protruding coiled forms made of jute and linen. This earlier work was less theatrical than the piece I made for the Whitney; with its intensive materiality and technique that it required, the work had more to do with woven labor. Even before Monster, I made a work Untitled (Cockatrice) (2009), for a group exhibition at Galleria Massimo de Carlo in Milan.

HOWE: So were you approaching Cockatrice, and weaving in general, as an investigation of human labor and economy?

UKLANSKI: Not exactly. By “woven labor,” I intended to convey a more descriptive term: both Monster and Cockatrice have more woven elements than The Year We Made Contact-because of their intricate, handmade nature, these two works belong more readily to, say, the genre of fiber arts than the more spectacular or theatrical work at the Whitney.

HOWE: So can you tell me a bit more, then, about how you strategize craft?

UKLANSKI: I’ve always been interested in genres that are unpopular—in film, art, or otherwise—and that exist or even thrive under the radar, without a wide audience. And I think my work reflects this interest. For example, The Joy of Photography series, begun in 1996, echoes serious amateur photography, and my film Summer Love (2008) adopts the tropes of Westerns, and finally, fiber art—all of which seem completely out of fashion at the moment.

What heightened my interest in fiber art was the gendered or feminist context in which this work operated in the art world of the ’70s. Of course, there is a Polish connection in our tradition of Tkanina Artystyczna, which has been around forever and has a very specific codification in popular and folk cultures.

UKLANSKI: Not exclusively. I started to work with “painting”-or rather “meta-painting”-before these tie dyes, in such works as my pencil shaving “tableaux” and the torn paper collages I started making more than a decade ago. I’m interested in using “painting” as a means rather than as an end. The impetus for this discharge show was not coming from a desire to subvert a “high art.”

HOWE: Based on your work on pieces like Untitled (Dance Floor), which was included in the Walker’s group exhibition “Let’s Entertain,” you were for a time grouped with relational aesthetics, which was meant to create very open social situations. I think your dance floor was located in the museum’s coat-check room. Why there?

UKLANSKI: The coat-check was self-service, so I suppose the gesture of installing it there was a bit more democratic. When originally installed at Gavin Brown’s Enterprise in New York, it took up the floor space of the entire gallery, including the office. The whole thing was a fully functioning dance floor. From then on, I wanted to create situations where the visitor was confronted more frontally, even aggressively, with the work. Because the dance floor had a loud music track, many visitors felt put on the spot or awkward, and they tried to avoid it. So I would install the dance floor in spaces that could not be avoided: entrances, lobbies, coat checks. It worked well, particularly when it was installed at MoMA, where it covered the ground of the whole outdoor sculpture garden. The more uptight the original environment, the better it functioned.

HOWE: It’s a much less aggressive approach, than, say, Adrian Piper’s Funk Lessons. But was it still your intention to dismantle social hierarchies?

HOWE: How so? Are you referring to the beefy go-go dancer in the silver lamé bathing suit in Toress’s Untitled (Go-Go Dancing Platform) (1991)? That piece is both sexy and absurd in the way it politicizes, or queers, minimalist concerns with objecthood, phenomenology, and spectatorship. The dancer becomes the minimalist object, as if it literally came alive, and it really becomes about the viewer encountering that object in a space, and a sort of kinky subject/object relation. And as the dancer is only there five minutes every day, it also plays on the idea of contingency in time and place, as the experience really depends on chance, and when you show up. Without appropriating a specifically gay idiom, perhaps there’s a shared interest in “vernacular” culture.

HOWE: You should consider installing a disco at Gagosian [laughs]. There is a range of social hierarchies there that could use some breaking down.

UKLANSKI: Gagosian is a difficult context for artists, because on one hand anything goes, but consequently even “edgy” work will lose its edge. It’s a much more codified space than many other commercial galleries. The public and critics bring prejudices—it’s something I’m highly aware of while showing there.

HOWE: I think the fact that you tie-dyed the gallery wallpaper is an interesting way to mark that space.

UKLANSKI: It was a very deliberate decision. The wallpaper and the tight hanging prevents you from getting lost in any one, single painting. The “paintings” became less autonomous, and the mise-en-scene indeed turned out a more potent presentation for this body of work. I was less interested in playing on existing styles of modernism, than offering a kind of “underdog” approach, or what I like to dub my “ESL” aesthetic.