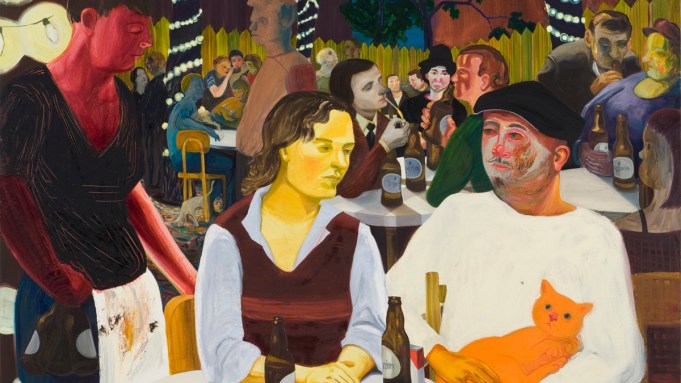 What do the curators of the 2013 Carnegie International want you to take away from their museum-wide exhibition? The key word is “play.” The museum as a playground, games as critique—such analogies bubbled up in the galleries, in the catalogue and in remarks by museum personnel at the latest incarnation of this exhibition, founded 117 years ago and the oldest of its kind in the U.S., now at Pittsburgh’s Carnegie Museum of Art (through Mar. 16, 2014).

The version of play embraced by the show’s three co-curators, Daniel Baumann, Dan Byers and Tina Kukielski, includes placing artworks in unexpected locations of the Carnegie’s museum campus, including its natural history wing, and installing children’s play equipment on the museum’s front lawn.

Given the scope of this exhibition—35 artists from 19 countries—and the ambitions of its curators—”we wanted to make a show that would actually affect peoples’ lives,” said Byers in his opening remarks to the press—the theme of creative play could not necessarily address the concerns of all artworks and viewers. As evidenced by the diversity of artistic positions across the show, including many political and poetic gestures, play, it was revealed, is only potent if you’re not doing it all the time.

“If you have to do a show this size, it can get intimidating,” confessed Baumann during the press conference, “so thinking of the museum as a playground was very liberating, and freed us up to basically think whatever we wanted.” In this honest revelation, Baumann made transparent a vulnerable position: Does play undercut the seriousness of works that are also communicating political and socioeconomic problems? Are imaginative proposals enough to provoke the creation of alternate realities?

No children were seen playing on the Lozziworm slide on opening day, but a nearby cascade of hulking barricades, leaning against the museum’s front entrance, overshadowed the play equipment in both scale and significance. It is the largest sculpture created to date by London-based artist Phyllida Barlow. Rendering of Tip (2013) is composed of various pieces of wood bound together with multicolored tourniquets and wrapped with bandage-like gauze. The dramatic sculpture resembles a makeshift war memorial or a hostile uprising of objects—not a funhouse.

Sarah Lucas, of the YBA generation of British artists, has some sinister fun with museum visitors by giving them a gallery bench to rest and to pose on as if you were one of her awkwardly bulging objects. But the bench, called C1 (2013) and made partly of cinder blocks, has sitters walk away with a dusty monoprint on their butts, courtesy of the artist.

Lucas’s other works present include her signature sculptures made from cigarettes, here shaped into breasts and wrapped in a bra (Stars at a glance, 2007), and acrobatic testicles (Loungers #3, 2011). These are displayed in a gallery adjacent to a play lab designed by Tokyo-based Tezuka Architects called The Playground Project, presumably for children and their chaperones. The strange neighboring of The Playground Project and Lucas’s sculptures conveys the many forms of play present.

The tensions of “play”—who plays, and by whose rules—arise immediately in the first gallery. Here, Faces and Phases, a wall of photo portraits taken by Zanele Muholi of South African lesbians, is surrounded by bales of confetti—Jestem (2013), an artwork by Lara Favaretto—that seem as if they are on stand-by for a celebration or a coming-out parade. Muholi’s portraits depict “people like me, who identify as black lesbians,” the artist told A.i.A. in the gallery, in front of her work. “I don’t work with strangers. These are not models. Some of them are victims of hate crimes,” she said.

Muholi has shown parts of Faces and Phases at Documenta 13 and the 2013 Venice Biennale. In Pittsburgh it won the $10,000 Fine Prize, just one of two artworks to receive honors from a jury comprised of former Carnegie International curators, the museum’s director and a number of museum trustees. “It’s a special show,” judge and trustee Alice Snyder told A.i.A. as she was leaving the museum after jurying the show. “It makes you happy.” (The other award, the $10,000 Carnegie Prize, was granted to painter Nicole Eisenman.)

Some of the best research-based artworks in the International made me wish no one had mentioned the word “play” at all. Los Angeles artist Frances Stark’s multi-media experience is itself worth a trip to Pittsburgh. She debuts an institutional critique delivered as an exploded music video-slash-lecture on the corruption of education by money. Titled Bobby Jesus’s Alma Mater b/w Reading the Book of David and/or Paying Attention Is Free (2013), the artwork uses an exciting spotlight sequence and text visuals to detail a spiderweb of controversy involving rap music moguls at Los Angeles’s Roski School of Fine Arts at the University of Southern California, where Stark is a tenured professor.

“I’m fuckin’ pissed,” Stark told A.i.A. in the gallery, alongside her work. When asked if hers is an anti-USC piece, she snapped, “Yeah! But I’m not going to get libelous; I just put two and two together.” Stark’s investigation, which is set to the music of West Coast rapper DJ Quik, plays out like a wicked PowerPoint presentation; across from it were free takeaway posters filled with her research.

“There are so many black men in America who are really good writers, but people don’t even think about it as writing,” she said. “If you listen to DJ Quik’s body of work, it’s full of pussy and violence, but there’s also an autobiography. It’s writing, and I’m a close reader.”

Stark doesn’t want viewers to get hung up on the $70 million gift to her college by former NWA rapper Dr. Dre; in fact, there’s an even more interesting drama in her work that unfolds about a student she has mentored, Bobby Jesus, from nearby South Central College. Stark’s bigger project aims to empower any citizen to become a student and to uncover the politics that govern our daily lives. “Ultimately, it’s about paying attention,” said Stark. “Paying attention is free.”