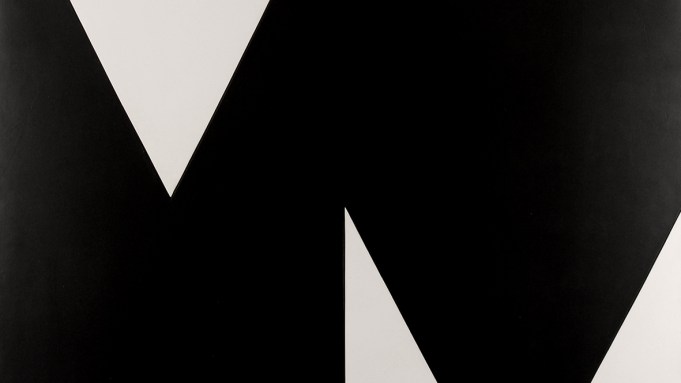 Organized by Olivier Berggruen at Dickinson New York gallery, “Playing with Form: Concrete Art from Brazil” focuses on the shift from the Concretism to Neoconcretism—two movements popular in São Paulo and Rio de Janeiro in from the early 1950s through the ’60s. Berggruen, a former Sotheby’s specialist and associate curator at Schirn Kunstalle Frankfurt, begins the survey with a group of Brazilian artists who, inspired by European modernism, shied away from popular, distinctly Latin styles in favor of one rooted in geometric abstraction.

Works such as Hélio Oiticica’s ink drawing Metaesquema Numero 197 (1957), colored geometric forms floating on a paper ground, or Lygia Clark’s Bicho (1960), a sculpture meant to be folded and manipulated, articulate the Brazilian interest in the linear order of geometry as well as the playfulness of movement in space.

ALEXANDER ADLER How does the title “Playing with Form” orient the viewer and represent the transition from Concrete to Neoconcrete art in midcentury?

OLIVIER BERGGRUEN The departure point for these artists is a formal vocabulary noticeable in the European tradition of the early 20th century: abstract art, including movements such as Suprematism, that was driven by elements of mathematics (especially calculus and geometry) along with a component that I think of as an antecedent to conceptualism.

ADLER What did artists like Lygia Clark, Lygia Pape, and Judith Lauand use as source material?

BERGGRUEN European art was widely showcased in Brazil immediately after the war and through the 1950s. The country enjoyed a period of prosperity during which museums such as the Museu de Arte de São Paulo (MASP) were founded and collectors became increasingly supportive of native artists.

ADLER Were any of the artists in the show involved with the development of Brasilia, a modernist Utopia of sorts?

BERGGRUEN Not so much. The artists in the show are most easily divided into two camps: the Paulistas (from São Paulo) and the Cariocas (based in Rio). Both groups had some contact with the principal architect of Brasilia, Oscar Niemeyer, who was from Rio. There are also links between the two factions through a young but ardent critic, Mário Pedrosa, who was very involved in promoting Alexander Calder’s work, which became very influential in Brazil. Calder met a lot of young artists while exhibiting there.

ADLER How did Calder factor into this art scene? Would you associate him more with the Concretists or the Neoconcretists?

BERGGRUEN Calder provides a link between the Concretists, who saw form as a goal in itself, and the Neoconcretists, who turned the rather stiff and formal idea of fundamental geometry on its head. The balance and measure in Calder’s work required careful calculation and a grasp of geometry that the Concretists privileged, but its freedom and unpredictability inspired the Neoconcretists. Calder’s forms are organic, and his works point toward a more sensual and interactive—as opposed to intellectual—realm.

ADLER Who were the staunchest members of the two groups, those most committed to their ideals whether Concretist or other?

BERGGRUEN It’s subjective surely, but the Rio artists very soon felt they wanted to be liberated from formal rigor, as opposed to the Paulistas, who were very orthodox. One of the most loyal to Concretism was Judith Lauand. She is still alive and was the subject of a show in São Paulo last year. Personally, I think that Oiticica, Lygia Pape, Lygia Clark, and Willys de Castro would be most appropriate answer to your question; all four went through both phases, although Pape a bit less involved in the first phase.

ADLER I always envisioned this dichotomy as dramatic and divisive, but you make the shift seem more like a natural progression. What was the nature of it? Did a rupture come when the Neoconcrete manifesto was published in 1959?

BERGGRUEN The change grew more dramatic over time. In this exhibition, we illustrate the moment of division with the work Objeto activo (Active Object), 1959-60, by Willys de Castro. It’s a column mounted on a wall that warps the surrounding space. It unsettles the viewer: is it architecture or art? For Lygia Clark, something new was clearly afloat by the time she executed her “Bichos,” work that requires participation. These are some of the key pieces in the show. They come in all shapes and sizes. The name “Bicho” means animal, and these objects are meant to be wild, mean to manipulate.

ADLER What about the question of Latin American identity? Could this work have been created outside of Brazil?

BERGGRUEN Consider Victor Vasarely, a European artist working at about the same time. The Brazilians carry out similar ideas with a greater intensity and poeticism. More so than their predecessors, the Neoconcretists were distinctly Brazilian, trying to find ways to undermine traditional approaches, bringing the human body into the work and channeling a Brazilian awareness of self in a very physical sense. They emphasized the total experience of the body, not just vision or intellect but touch. It reminds me of Yves Klein. The Brazilians worked in a similar vein, not tending so much toward performance in the manner of Joseph Beuys and Jannis Kounellis but creating works of art that have very much to do with participation, with puncturing barriers between viewer and object.

ADLER Does this derive from Calder and his influence?

BERGGRUEN Calder’s mobiles may have inspired Clark to create the works that can be manipulated. But the idea goes back even further to two father figures, Mondrian and Malevich, who did geometric works that have the potential to be articulated in three dimensions.

ADLER So you find a direct relationship between works by Malevich and Mondrian a selected example by Clark?

BERGGRUEN I don’t think the names have great importance, but the collage is called Espaco Modulado (Modulated Space), 1958. It’s deceptively simple but the ideas behind it are complex.

ADLER It was created after the manifesto? Is it a traditional piece?

BERGGRUEN It’s a two-dimensional work, but the shapes seem to extend forward or circulate. You can view the piece in different ways—as a flat object or as one with the potential of moving in space. Aesthetically speaking, I think it’s spot on dealing with calculus and intuition.

ADLER How does Oiticicia’s work relate to the period of transition?

BERGGRUEN Metaesquema Numero 197 belongs to a whole series of works on paper from the late ‘50s. What is crucial in these works is the idea that shapes that can move in space.

ADLER Yet the shapes are confined to the picture plane, outlined by a rectangle.

BERGGRUEN I’ve been thinking about that a lot recently. I’m not sure whether it’s a framing device or a way of creating the shape and another layer of uncertainty. Over two hundred of these works exist, and we include at least six or eight of them in the show. Putting Oiticia’s work in conversation with that of Clark, we can see that she was more interested in creating pieces that are restricted to black and white, dealing with different permutations and trying little variations from one work to the next. Oiticicia created very beautiful works that are inherently in the tradition of Klee, who also included framing devices.

ADLER Besides Clark’s “Bichos,” what works in the show can be manipulated and how?

BERGGRUEN One of the most important is a Neoconcretist cut-paper work called Gibi (1970) by Raymundo Colares. He is less well known than the other artists but absolutely wonderful. His work is rare, since he died at a young age. Colares started experimenting with paintings before moving onto these paper works. Here, we’re perpetuating the concept of manipulation. Gibi  has different configurations as a three-dimensional work really coming to life.

Vaquera, Palomo Spain and Ashish Design Luggage for Away