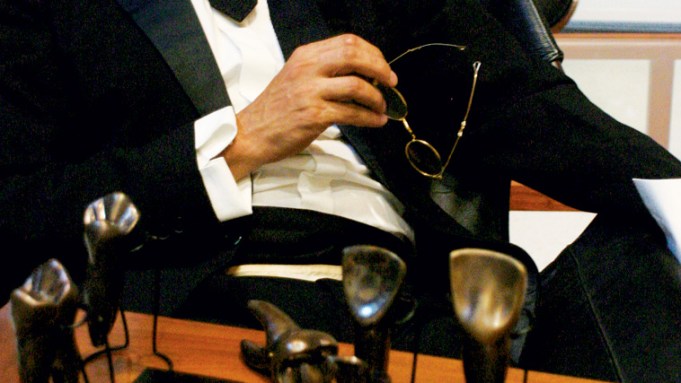 I am inspired by what I call the energy of conjunction. This energy results from bringing disparate things together: unexpected materials, objects, ideas and, most potent and important of all, words. Certain combinations or sequences of words generate a concentrated form of energy that can be psychological, emotional, sensual and spatial. A number of literary classics, especially works by Arthur Rimbaud, Lautréamont and Edgar Allan Poe, reveal something new to me and help generate the energy I’m referring to.

A similar phenomenon can be found in music. I am thinking of Glenn Gould and how his unexpected reinterpretations of Bach transform the composer’s work into something entirely fresh. When an artist shines new light on old compositions, elements once forgotten or taken for granted can assume a vital intensity and clarity. It is an alchemical process.

As Rimbaud writes in A Season in Hell (1873), “Old-fashioned poetry played a large part in my alchemy of the word. I grew accustomed to pure hallucination. . . . I said my farewells to the world in the form of poetic stories.” For Rimbaud, the word is a catalyst for transition and transformation, the tool of a true alchemist.

For me, to connect such unlikely things produces activated spaces or, rather, psychoactive spaces. Psychoactive is actually a legal term, usually referring to drugs or their effects. I am thinking of it more in the sense of an action or transition, mental and physical, an activation that integrates both body and mind.

This entire process can be used as a way to organize space. Organizing space means organizing the cause of things. The cause of things, however, is invisible. One can sense the cause in an intuitive way, like the laws of physics—for instance, we are aware of gravity without precisely knowing its scientific basis. That is why I am interested in animism and shamanism and the way various cultures around the world intuitively deal with poetic energy. Psychoanalysis attempts to explain the devices of animism and superstition, but animistic language persists everywhere in the world.

A fascinating text, and a major muse for me, is Poe’s prose poem Eureka: An Essay on the Material and Spiritual Universe (1848). It describes a kind of personal, scientific and mystical exploration and also the alchemical process of language. Poe’s dedication of the poem sets the tone:

To the few who love me and whom I love-to those who feel rather than to those who think-to the dreamers and those who put faith in dreams as in the only realities-I offer this Book of Truths, not in its character of Truth-Teller, but for the Beauty that abounds in its Truth; constituting it true. To these I present the composition as an Art-Product alone:-let us say as a Romance; or if I be not urging too lofty a claim, as a Poem.

Poe attempts to construct a theoretical design of the universe in physical, metaphysical and mathematical terms. In some passages he touches on some form of the energy of conjunction, as when he writes:

To electricity-so, for the present, continuing to call it-we may not be wrong in referring the various physical appearances of light, heat and magnetism; but far less shall we be liable to err in attributing to this strictly spiritual principle the more important phenomena of vitality, consciousness and Thought.

The components of his exploration, all the various disciplines of science and math as well as spiritual investigations, difficult and contradictory as they may seem, direct themselves toward specific goals—either total destruction or perfect harmony. You could say that harmony is the dynamic balance between the entire spectrum of things in the universe and its relationship to the self. Harmony would ideally be a kind of preconscious state, before the senses and sagacity rule once more.

When I am working, I try to position myself in front of—or prior to—the senses, as if about to compose a myth. It’s a precognitive state that can sometimes be a confrontation. I think of Blake and his visions. It’s a feeling that you situate yourself in front of phenomena, before the various elements are fully visible, illuminated or understood. In the watercolors I’ve been working on, the paper at first appears to be empty or meaningless. I try to capture the moment just before the sun rises, when things are surrounded by a shifting aurora and not yet defined.

The most expressive things illuminate what was previously in darkness, in shadows, the hidden or, in some instances, what is forbidden or taboo. A recent film I directed, Cooking, part of the 2010 compilation Destricted, features a young couple on a bed. In the course of their lovemaking, sexual organs, bodily fluids and waste are transformed into crystals. I am not so interested in the images or signs that such incongruous ingredients and unexpected transformations create, but in the kind of poetic glue that binds all of these things together. This is what I would call my muse. One of the strongest manifestations of poetic glue is found in love, which for humankind is the prime energy of conjunction.—As told to David Ebony

OPENING SOON
A permanent gallery dedicated to Tunga’s works debuts at the Instituto de Arte Contemporânea Inhotim, Brazil, on Sept. 6. An exhibition of new works by the artist will appear at Luhring Augustine Gallery, New York, in fall, 2013.

TUNGA is an artist based in Rio de Janeiro.