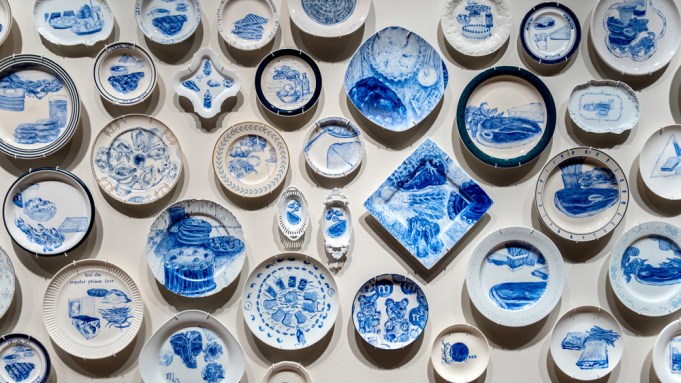 Arriving in Grand Rapids, Mich. for ArtPrize feels like falling down an art rabbit hole. For two and a half weeks each fall, the quaint Midwestern city hosts what organizers vaunt as the world’s largest art competition. The works range from craft-based to conceptual, from murals honoring fallen soldiers to video art meditating on existence. ArtPrize boasts a lot of numbers: $500,000 in prizes, 423,000 voters, 1,500 artworks, and 160 venues, but what exactly the whole event is about is hard to decode.

ArtPrize was first conceived in 2009 as a kind of “American Idol” for contemporary art: a competition where the winning artist, determined by popular vote, is awarded a hefty six-figure cash prize. Over the years, a parallel juried contest has emerged within the competition, and last year marked the first time that ArtPrize was structured in a way that a popular vote winner and a juried winner were each awarded $200,000. Eight additional medium-specific prizes are awarded at $12,500 each, with five decided by the jury and three by a public vote.

During this year’s edition (Sept. 23-Oct. 11), the people chose to award one grand prize to a photo-fiber quilt depicting a wooded Michigan landscape titled Northwood Awakening, while the jury selected a derelict-chic performance piece Higher Ground, featuring women in white dresses swinging in the windows of a former convent that the artist painted bright pink. The two winners epitomized the different types of art and artists that ArtPrize attracts. The multimedia quilt, building in layers left to right from a photographic print to quilted textile, was made by Loveless PhotoFiber’s Steve and Ann Loveless, a husband-and-wife team based in Frankfort, Mich.; the site-specific performance was realized by Kate Gilmore, a New York-based artist with an MFA from School of Visual Arts.

ArtPrize calls itself “radically open.” Anyone can submit work by creating an online profile. Businesses and institutions can apply to be venues, and then they can invite artists to show in their spaces. For the 19-day event, restaurants, retail shops and even the local police department show art alongside museums and galleries. I saw landscape photography in a frozen yogurt shop, yarn art in a coffee shop, and two particularly pro-America and pro-military figurative paintings in my hotel lobby. With so many different things on display, meditation on individual pieces frequently becomes overwhelmed by an interest in the larger structures at play.

Much of the best art could be found in traditional gallery spaces. Two works stood out in the exhibition “Sightlines,” organized by curator Michele Bosak at the Kendall College of Art and Design’s Fed Galleries. Oregon-based Julie Green’s Last Supper (2015) features 600 plates on which the artist has painted the final meals of Death Row inmates in the same navy blue hues as classic china patterns. The hanging plates flank three walls of the gallery, and on a fourth wall is a video in which each plate is show from a bird’s-eye view, filmed in a flat style reminiscent of mid-century Armenian director Sergei Parajanov’s. A disembodied hand moves one plate offscreen and the next onscreen while a deadpan voiceover itemizes the meals, including “fried shrimp, baked potato, a pint of chocolate ice cream and two soft drinks” or “pizza and donuts.” Prince Thomas’s That Was Then (2014), a single-channel video, pairs footage of Fourth of July fireworks with audio from CNN’s 1991 broadcast of Operation Desert Storm. Both were awarded jury prizes, in the respective categories of three-dimensional and time-based work.

The allure of the prize money encourages artists to participate in ArtPrize. But many of Grand Rapids’s year-round art-oriented venues reach out to artists whose work they already know and ask them to apply, rather than reviewing the open-call applications. And yet, there are surprises. Bosak, for example, told me that she found Thomas through his ArtPrize profile. Though he has exhibited internationally and teaches art at Lamar University in Beaumont, Tex., Bosak wouldn’t have found his work if he didn’t apply, and now he’s taking home a fat check.

Despite success stories like this one, crowd-sourced contests always have the potential to encourage aspirational free labor. “It’s the hotels and restaurants that are profiting off of ArtPrize. Artists are paying a fee to enter. They are paying money to create the work and ship the work,” explained Bosak when I spoke with her in Grand Rapids. She noted that some venues, like Kendall’s Fed Galleries, will independently cover artists’ costs. For select applicants, ArtPrize doles out grants to cover some of these expenses as well. To create the works I saw in my hotel lobby, however, the artists covered all their own expenses.

The prizes attract artists, and in turn, the spectacle of the event lures tourists and foot traffic downtown. About half a million people come to ArtPrize each year, and based on last year’s data, about half of them are from 30 miles away or more. For local businesses, the revenue from the event is equivalent to adding a thirteenth month to the year, according to the tourism bureau Experience Grand Rapids. And it’s helped establish the city as a destination for conferences and other events throughout the year. Since ArtPrize first started six years ago in the wake of the recession, it’s been a driving force in the city’s growth. As in dozens of other postindustrial cities across the country, there’s a sense in Grand Rapids that investing in the holy trinity of culture, Kombucha and craft beer can revitalize their economy—it’s not just gentrification, it’s Brooklynification.

Nowhere did this dynamic feel more palpable in the art itself as the installations at the Rumsey Street Projects organized by Grand Rapids-based SiTE:LAB, a group which specializes in curating site-specific temporary art projects in abandoned or underutilized spaces. The presentation included Kate Gilmore’s grand prize-winning Higher Ground (2015). Habitat for Humanity owns the Rumsey Street buildings—comprising a former church, rectory, convent, auto body shop and homes—in Roosevelt Park, a low-income neighborhood of primarily Hispanic residents in Grand Rapids, and is allowing artists to transform them before they’re redeveloped into housing in 2017. Not only were the dilapidated twee aesthetics in many of the invited artists’ works reminiscent of something characteristically Brooklyn, so was the familiar pattern of artists coming from elsewhere and being encouraged to express themselves without much engagement with the community around them. In one case, a 90-year-old woman was moved out of her home for the art project to take place. “It was a really fortunate transition,” said Paul Amenta, who heads SiTE:LAB, during a tour of the projects, explaining that the woman needed to be in an assisted living facility anyway.

There’s another tension more openly acknowledged by ArtPrize: the chasm between the tastes of the voting public and the invited jury, which included artist Michael Rakowitz, curator Dan Cameron, and Virginia Commonwealth University’s Institute for Contemporary Art director Lisa Freiman. While the competition’s dual structure has emerged haphazardly, its organizers seem to have embraced the divergent populist and professional sensibilities—during the award show ArtPrize creative director Todd Herring cracked jokes about the public liking “big shiny things” and the jury liking to “wax poetic about the minimal and cerebral ones.” But part of ArtPrize also seems to be about narrowing this gap. During the event, the local NBC affiliate airs several educational prime-time TV specials where art professionals from the jury explain their choices. “They help elevate my knowledge and my neighbor’s knowledge about art,” said Experience Grand Rapids senior vice president Janet Korn.

The impulse to expose more people to art and new ideas seems hard to criticize. “For me the goal was to shake things up a bit. It’s the Midwest, people stay in their lanes,” said ArtPrize founder Rick DeVos when I sat down with him in Grand Rapids—he’s also the CEO of a venture capital fund Start Garden and the grandson of Amway founder and billionaire Richard DeVos. “I thought to inject a little bit of the surreal or the ridiculous and take people out of the norm for two and a half weeks would be valuable. And that compounds over time, creating a culture that is more open, more curious and one that perhaps continues to progress more in general.”

I thought back to works at ArtPrize like Last Supper and That Was Then. A sizable part of the ArtPrize audience is high school kids and senior citizen groups bussed in from small towns hours away, and I appreciated that they’re seeing works that frame subjects like capital punishment and war in much more subtle and unpredictable ways than the TV news. But I also thought back to a tour of the Frederik Meijer Gardens and Sculpture Park, another ArtPrize venue. A staff curator explained that its benefactor Meijer, who’d made a fortune through a chain of supermarkets, wanted his legacy to be this collection, which today includes works by Rodin, Jenny Holzer and Ai Weiwei. Meijer had started collecting representational animal sculptures, then branched out to more conceptual works. “Fred didn’t always understand or appreciate everything in the collection,” the curator said, “but he was eager to learn from the experts.” For a moment, I became suspicious of my own urge to spread the gospel of new ideas and good taste. Good taste, I realized, can be as dogmatic as anything else.

KitchenAid Is Staging a Fashion Show

Eco-Friendly Shoes Are Now For Kids As Well, Thanks To Stride Rite