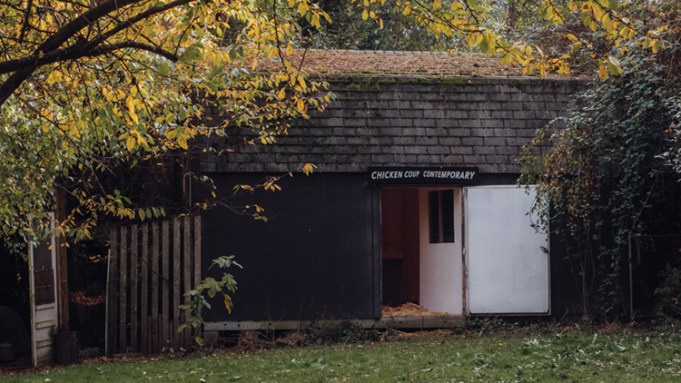 Last fall I moved back to Portland after a decade-long absence. When I lived here from 1998 to mid-2009, the national DIY trend of that era often manifested itself in Portland’s art scene as a series of ambitious, sprawling curatorial projects. For example, 2003 saw the debut of both Modern Zoo, a scrappy summer-long exhibition series in a 120,000-square-foot warehouse under the St. Johns Bridge, as well as Core Sample, a ten-day 140-artist series of exhibitions produced by volunteers as a response to Portland’s omission from “Baja to Vancouver: The West Coast and Contemporary Art,” a survey that toured four cities in its geographic purview.1 These undertakings were one-off experiments, but others were repeated and expanded, such as the thematic exhibition-in-print zine Portland Modern produced by artist Mark Brandau. Portland Modern ran from 2004 to 2007 and expanded from print into a brick-and-mortar exhibition site for eight months in 2006 before the entire project ended in 2007. Writing about Portland in 2003, novelist and screenwriter Jon Raymond categorized the moment as “a regional art scene arriving at some kind of critical mass, communally discovering the intoxicating new emotion called ambition.”2

High-reaching projects were possible when Portland was smaller and cheaper, when vacant light-industrial spaces could be borrowed from developers for a few weeks or months. Now that rents have risen 64 percent and the population density has increased 18.5 percent since 2006, no one is handing out free space. As I unpacked my boxes, I wondered what possibilities Portland still offers for ambitious artists. Had the last decade’s influx of tourists, tech money, and luxury-dorm apartments exsanguinated Portland’s punk ethos? Or were new strategies galvanizing artist-run projects?

I snagged a 2018 copy of Grapefruit Juice Artist Resource Guide, a directory of venues and resources for artists produced by Martha Daghlian (who also ran Grapefruits Art Space from 2017 to 2019), and began to investigate. Some of the projects listed in the compendium had already closed; others appeared to host events but not exhibitions; some were pop-ups and itinerant enterprises. But on the whole, among a host of established commercial and nonprofit institutions, many conceptually driven, independent visual arts spaces run by practicing artists seem to be thriving. Where Modern Zoo and Core Sample aimed to provide big, splashy overviews of Portland’s arts landscape, today’s projects are often intimate, idiosyncratic efforts, many inhabiting out-of-the-way corners of the city. Some of these new spaces seem intentionally modest: both Conduit and Chingada Gallery, for example, have nearly inconspicuous digital footprints and came to my attention only through word of mouth.3

In addition to this below-the-radar ethos, I encountered other themes. Most of these spaces appear unconcerned with the regional art market—or, indeed, with any market at all. “As part of our politics, we don’t sell work,” Diego Morales-Portillo, who co-runs Chingada Gallery with rubén garcía marrufo, said in an email. “The model of the gallery is based on transmitting ideas that can travel.” Chingada collaborates with artists from Latin America, such as Regina José Galindo and Jonathas de Andrade, who email files, videos, and instructions to Portland. “We like to think that the space works as an embassy,” Morales-Portillo wrote.4

Similarly, the program at Conduit, an apartment gallery and spare-bedroom residency run by Jade Novarino at the far southeastern edge of town, emphasizes installations, social practice happenings, and workshops. “I’m a first-generation American. Security and space, not money, are important,” Novarino told me. In 2017, Conduit received a one-year Precipice Fund grant from the Portland Institute for Contemporary Art; Novarino stretched that $3,500 to cover two years of operating expenses.5

Not too far from Conduit is the three-year-old Chicken Coop Contemporary, run by Srijon Chowdhury. As the name implies, the projects are housed in a small barn, among resident poultry. A recent exhibition showcased artist Keith J. Varadi’s altered readymades hung on the whitewashed plywood walls and nestled in the straw. “The program is a response to a ‘what if’ mentality,” Chowdhury explained. “This is all a form of research for my own work—in a way, it’s pretty selfish.”6 When I visited the gallery this fall, the chickens came running to greet me, like paparazzi.

Other spaces offer something closer to the classic gallery experience. Located in the same building as Disjecta Contemporary Art Center, the white-walled Carnation Contemporary runs an exhibition program of local and national artists (full disclosure: my work was exhibited there in 2018). Carnation is a seven-artist collective whose approach is market-neutral. “We don’t need to sell work to keep the gallery afloat, although, of course, you won’t find us complaining if work is sold,” cofounder Jeremy Le Grand said. “The artist gets 100 percent of the proceeds.”7

It’s surprising that Portland, where the average monthly rent for a one-bedroom is now around $1,500, still has affordable commercial space.8 Private Places, run by artist Bobbi Woods in a studio space in the Hollywood district, welcomes visitors to solo and two-person exhibitions by appointment. Most of the artists in Woods’s program hail from Los Angeles. Duos—Kelly Akashi and Cayetano Ferrer, Mark Flores and William E. Jones—have recently exhibited new collaborations in sculpture and collage. Private Places sits halfway between the traditional and the atypical, providing a fitting space for established artists who want to investigate new ways of working. Its small square footage and offbeat location give it an unorthodox atmosphere, but its presentation and program feel thoroughly professional. Woods credits part of Private Places’ potential to her $300 monthly rent. “Portland’s economy still allows for experimentation,” she said. “There’s room for different voices, and you can step away from convention.”9

Whether by design or circumstance, not many artist-run spaces last for more than a few years in Portland. Melanie Flood Projects is an exception. Having started the space in Brooklyn’s Clinton Hill neighborhood in 2008, Flood relaunched here in 2014, developing the gallery from an apartment operation into a more traditional enterprise. “It was always a project to serve fellow artists,” she said in an interview, “but it’s come a long way from the ‘let’s see what happens’ vibe that it started with.”10 By all accounts, Flood’s ambition has paid off: sales from one show nearly covered her annual rent (the space costs $750 per month). She is planning to show at NADA Miami this month and mount an exhibition of Carmen Winant’s work in 2020.

Every arts community needs the stability of long-term organizations to balance the sparkle and pop of more eccentric, evanescent projects. Alarmingly, in the last year and a half Portland witnessed the closing of two important institutions, the Art Gym at Marylhurst University and the Oregon College of Art and Craft. In 2018, Lewis and Clark College cut its sole curatorial position. There’s a noticeable hole left by these disappearances, and a very real limit to what small, underfunded, precarious projects can do to make up for the loss. Even if some of these spaces hoped to expand into the territory normally occupied by larger nonprofits, they would find little support. While the Portland Institute for Contemporary Art and the Regional Arts and Culture Council both provide grants to underwrite the launch or early operations of artist-led projects in the city, there are few other resources (beyond day jobs or trust funds) to sustain culturally beneficial but noncommercial enterprises. “We need to figure some stuff out at the institutional level,” acknowledged Grace Kook-Anderson, curator of Northwest art at the Portland Art Museum. “There’s a lot of energy for small-scale, one-off, limited-term engagements with the community, but there’s a perpetual cycle of always doing things at a grassroots level.”11

There are overlapping factors at work here, including a lack of long-term funding, a transitory population, and a shift in community priorities. Perhaps the situation is also partly affected by the steady creep of the gig economy, which proffers the flexibility and independence of short-term engagements rather than security and collectivity. “There are good artists, but a lack of support hampers this place,” Chowdhury said. “We need two more well-funded institutions.” This desire for greater institutional assistance was a recurring theme in many of my conversations, though ideas of how to address the problem differed. Some, like Flood, feel that Portland’s governing bodies have to be more involved in the arts. “We need more interest and support, more investment from the city,” she told me. “We need the city to have skin in the game.”

Entangled with the desire for effective support is a need for greater critical dialogue, in a town that can sometimes feel averse to criticism. Directly raising issues about the current and long-term health of the arts ecosystem is sometimes taken as accusatory rather than investigatory. It can be tricky for members of the art community to speak publicly about challenging issues, particularly when the environment is largely defined by a paucity of means. When everyone is struggling to stay afloat, efforts to promote a more critical discourse can seem counterproductive, even antagonistic. “Living in a smaller city with limited resources, it’s difficult to be critical in a room with only twenty people,” said Flood, “because you have to have good relationships with everyone.” And yet, without rigorous criticality, it’s hard for a regional art scene to refine its practices and garner the kind of recognition that might, in turn, attract greater support.

Readers from other parts of the country will note that these issues are not unique to Portland. Cities throughout the US have experienced a similar dynamic in recent years: sharp increases in housing and living costs, a commensurate loss of spaces and resources for the arts, and a visible de-prioritization of creativity in state funding. Exhibition spaces everywhere, no matter how modest or unconventional, require labor and resources to keep going; galleries are particularly tough to operate while trying to maintain an art practice and juggle the requirements of a day job, as the artists cited here do.

The renewed desirability of urban centers, seen throughout the US in recent years, is due in part to cities’ heightened cultural activity and production. Yet a failure to adequately protect unremunerative enterprises has seriously eroded the viability of the arts in many midsize urban settings. “A lot of artists come here because they’re not bound by commercial limitations,” Kook-Anderson noted, “but of course if you’re even a little bit more ambitious, it can be a challenging place.”

After seven years in San Francisco and two in Warsaw, I’m calling Portland home again, and I’m in excellent company: Portland has the fourth-highest concentration of artists in the nation, after New York, San Francisco, and Los Angeles.12 For the immediate future, experimentation and risk-taking are still possible, and collective political action could help secure some key components (like stable rents and allocations of arts funding) of a thriving art ecosystem. Alternative venues are still brimming with vitality in Portland, just as they were a decade ago; the next step is to address the relative absence of major institutions, which normally provide larger-scale social spaces and professional opportunities to artists and curators.