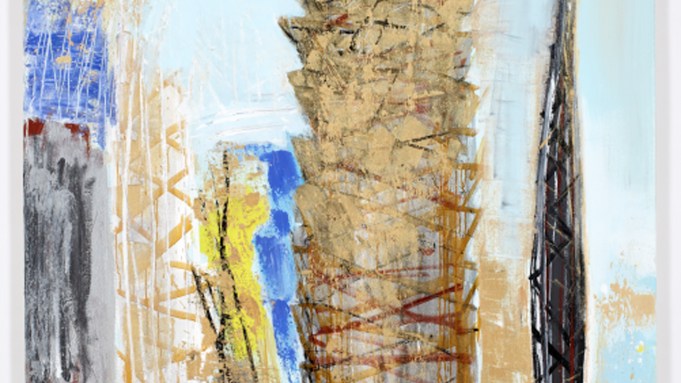 Nabil Nahas is perhaps best known for dense, monochromatic acrylic paintings that employ the rigid geometries of Islamic patterning. Yet his current London exhibition sees a departure from such abstract imagery. The new canvases in “Phoenix Dactylifera,” at Ben Brown Fine Arts (through Nov. 14), come from left field, the Lebanese-born artist told A.i.A. via phone recently from his New York studio.

He described his new practice as “working from memory, impressions, time of day, temperature.” The new works are “portraits,” as he refers to them, of cedars, olive trees, cacti, thistles and palms; the show’s title refers to the date palm, a tree native to the Middle East and one of the three trees at the gates of Paradise, as described in the Qu’ran. The portraits of the flora of his native land represent the first time the artist has relinquished imagery driven by his religious zeal in favor of abstraction, picking up a thread, if only in terms of palette and technique, left off in his 1988 “Gold” series, in which, rather than the worked surface he became known for, dark objects dominate warm metallic backdrops.

In 1993, Nahas traveled back to his native Lebanon from New York City, where he had lived for 18 years. In that span, he had numerous solo shows at galleries such as New York’s Robert Miller and Sperone Westwater (where he still shows), and appeared in group shows at institutions including the Studio Museum in Harlem and the Queens Museum. He recalls that on his return, he was “quite taken” with the landscapes of his childhood. He returned many times over the next decade, taking long drives through the countryside. In 2006, back in his New York studio, the artist began depicting palm trees from memory, not in his usual graphic way, but using more gestural marks. “These [paintings] were not made as a set, and were never intended to be shown,” he told A.i.A. It was, he says, a more private expression: “I kept very secretive about them.”

Nahas let both bodies of work, figurative and abstract, hang side by side in his studio. When fed up with the rigor of one process, he would “indulge in the pleasure” of the other, he said.

The ability to partake in varying artistic modes perhaps has a parallel in the artist’s multicultural upbringing. “Being Lebanese, we are multicultural at birth,” he told A.i.A. in an e-mail. His paintings are often a subtle mix of the two environments familiar to him. An otherwise very classical composition depicting an olive tree in a Lebanese landscape, for example, is updated by a backdrop of “the intense orange of a New York September sunset” as seen by the artist out his studio window, he told A.i.A.

When questioned on his motivation for painting, Nahas gave a dual response. “For me, at its best, it is an expression of the times we live in,” he said, “but for you [the critic], I suppose it is a more difficult task, as it takes time to assess correctly what will remain. A Lebanese will react differently to a painting of a cedar than would an American, who would react differently to a Jasper Johns flag painting than would a Talib, but these are cultural differences, which have little to do with the aesthetic value of an image.”

The 12 Best Portable Power Stations for 2022, Because Going Off the Grid Is Overrated