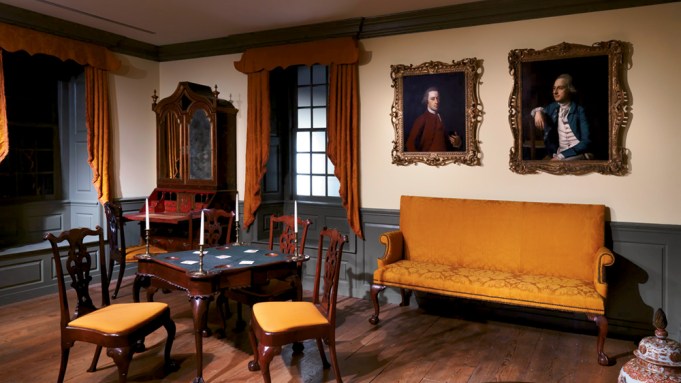 That Lucy Ives’s Impossible Views of the World (published in August by Penguin Press) and Andrew Durbin’s MacArthur Park (published in September by Nightboat Books) are both debut novels written by poets who are also art critics might explain the two books’ further similarities.1 Each centers on a neurotic art worker—Ives’s Stella Krakus is a curator and Durbin’s Nick Fowler, a writer—in the midst, simultaneously, of an affair with a wealthy, insufferable man; a research project with no clear end; and an ensuing existential crisis. Stella and Nick are both erudite, hypercritical narrators prone to exacting description and essayistic digressions about art, urban life, and the familiar archetypes that populate arts professions. Most significantly, the two protagonists share a fascination with utopias—and a troubling readiness to accept their impossibility as an excuse to stick to the status quo.

This is not to say the books are not distinct. Stella, to a greater degree than Nick, dwells in the particular, as does her story: Impossible Views of the World takes place in the course of one eventful week. An awkward thirtysomething “termed a cartographic specialist in the art history world” but “a dilettante in the world of cartographers,” Stella works as an assistant curator in the American Objects wing at New York City’s Central Museum of Art. (Called CeMArt for short, the museum is a barely veiled send-up of the Metropolitan Museum of Art, though the administration’s immoderate coziness with a corporate sponsor smacks of the Guggenheim.) Her unfulfilling routine is upended by the disappearance of her colleague Paul, who is “almost a friend” and an obscure but respected poet. Tasked with completing Paul’s work on the checklist for an upcoming exhibition, Stella discovers in his desk a photocopy of a fantastical early-nineteenth-century map of a utopian community called Elysia. Determined to figure out the map’s significance, she steals the document, along with copies of Paul’s files. What follows is an art historical caper that Vogue aptly dubbed “something of a From the Mixed-Up Files of Mrs. Basil E. Frankweiler for grown-ups.”2

As Stella gets closer to determining the map’s provenance, she may (or may not) be uncovering a conspiracy connecting Paul’s disappearance, several generations of a wealthy but disgraced New York family of artists and patrons, possible forgeries, and CeMArt’s latest exhibition of American portraiture. That exhibition is organized by the impossibly handsome Fred Lu, a senior curator in the American Objects department and scion of two wealthy New York families, with whom Stella has been conducting a (mostly) emotional affair while going through a bitter divorce. Stella seems to loathe Fred almost as much as she loves him, particularly for his willingness to collaborate with WANSEE, a multinational corporation seeking to privatize the world’s water supply and partner with CeMArt to open satellite museums around the globe.

Where Impossible Views finds its subject matter (and critique) in the institution, Durbin’s MacArthur Park looks to what Ives, in her blurb for the novel, calls “the precarious margins of the art world.” And where the focus of Views is small, concerned with inconspicuous but meaningful detail, MacArthur Park is big and sprawling, in both its settings and its questions. Nick, a twentysomething poet and budding art critic, begins his travel narrative in New York, where the wreckage of Hurricane Sandy catalyzes a preoccupying anxiety about climate change and the impending end of the world. He then sets out on a nebulous book project “about the weather”—and on trips to Miami, upstate New York, Fire Island, Los Angeles (because he has been commissioned to write about the Tom of Finland Foundation), London, and Vienna.

While in Los Angeles, Nick’s book about the weather (which, in a reflexive turn, is what we understand ourselves to be reading) also becomes a book about utopia. This section opens with a history of intentional communities and cults in Southern California, beginning at the start of the twentieth century and concluding with Scientology; at the Tom of Finland Foundation, Nick’s guides frame Touko Laaksonen’s erotic gay drawings as a “utopian project.” But Nick suspects that “a utopia of men is no utopia”—and that all utopias, however appealing, are illusory. In Impossible Views, Stella comes to a similar realization about the Elysia of her map. Though she never believes the town depicted is real, when she finally solves its tantalizing mystery—her own idealized project—she is not quite satisfied. Every utopia fails on its own terms.

Together, Impossible Views and MacArthur Park suggest that art itself might be such a failed project. Or that the art world is, at least, as Nick implies while considering the 2014 Pierre Huyghe retrospective at the Los Angeles County Museum of Art:

The art world is an unregulated economy that borrows from other economies . . . to continually update its relationship to the world and, in acting as a conduit for other (and all) disciplines, strives to become the clearest image of the world in which we may better see ourselves. . . . Art tries to be everything for everyone at once, all of it contained within salable products that can be exchanged between artists, galleries, individuals and institutions, across media, in a ‘conversation’ about what now means, and what that now once meant and will someday come to mean. . . . Everyone wants to be an artist because everyone wants to speak about the now.

An impossible aim, to be sure, “to be everything for everyone at once.” But it is not its ambition that dooms the project of art so much as its constraints, “contained” as it is. Consider, in Impossible Views, CeMArt’s partnership with an evil corporate sponsor that wants to include affiliates of the museum in each of its planned “smart cities”—“‘technology responsive’ communities” around the world in which people will “take refuge not just from everyday inconvenience and security issues posed by fundamentalists but from approaching environmental collapse.” The proposed sites include Nevada and Abu Dhabi, evoking international expansions undertaken by the Guggenheim, the Louvre, and others.

“Everyone” might want to be an artist not only because they want “to speak about the now” but also because they wish to be a part of the noble project of crafting an “image of the world in which we may better see ourselves.” Who doesn’t? Who in the art world, anyway? But reflection is not action, nor is this the only way to imagine art’s function. As Trotsky wrote, “Art, it is said, is not a mirror, but a hammer: it does not reflect, it shapes.”3

In their accounts of the flawed contexts in which they live and work, both Stella and Nick position themselves as outsiders. Though they blend in well enough, they go to great lengths to make it clear they see through the fictions that others around them happily accept. Disgusted by the scene of the swanky party where Fred announces CeMArt’s partnership with WANSEE, Stella wonders: “How could I possibly be a curator if Fred was a curator?” Of the partygoers at a club vying with feigned nonchalance to be photographed by Wolfgang Tillmans, Nick says: “I watched them and did not once allow myself [to] slip into their time.” Both fixate on the class differences between them and their more affluent lovers (Nick hates his boyfriend Simon’s “moneyed affect”), though both protagonists are white and middle-class, hardly outliers.

Stella and Nick’s desire to see themselves as exceptions to the rules of their lives is paired with a sense that they are powerless to change those rules. Stella laments that the circumstances of her life—her career, her relationships—feel beyond her control, even as she recognizes that she must bear some responsibility for them. Nick speaks of history grabbing and shoving us forward as if our role in it were passive. This echoes Stella’s description of the “invisible hand” she feels guiding her during her boldest moments. Ultimately, Stella’s most profound discovery in Impossible Views is not the origin of the map, but of that hand. Drunk at a friend’s party, she cracks it: “When it feels like there is that weird hand. . . . That’s you encountering yourself.”

How Stella and Nick imagine themselves in their own communities is how many in the art world seem to imagine themselves in the world at large: as outsiders who know better, exceptions to the ugliest aspects of their time and country, but powerless to do anything but study works of art. Through these characters and their delusions, Ives and Durbin reveal the flaw, and danger, of such thinking: it’s precisely at the moment we feel most helpless that we are exposed to our own potential power. Helplessness, as Nick says, is a mask.

1. For a discussion of their books, the relationship between poetry and fiction, and the genre of the “poet’s novel,” see “Poet Novelist: An Interview between Andrew Durbin and Lucy Ives,” Poetry Society of America, 2017, poetrysociety.org.