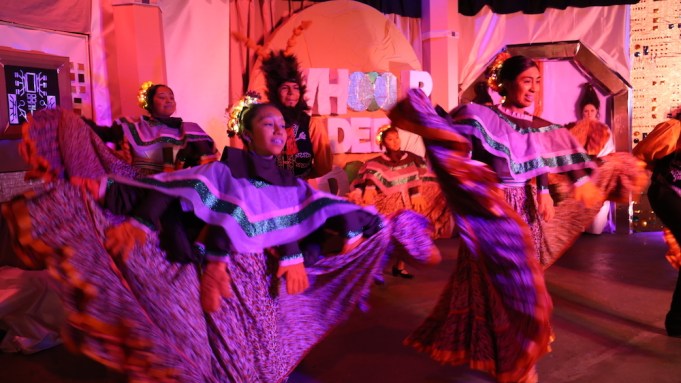 Last December I stood before the concrete labyrinth of the Knockdown Center in Maspeth, Queens, looking for an installation and performance by Whoop Dee Doo, an art collective whose founders frequently describe their work as a “fake cable access TV show.” They often work with young people, and this project featured local performance groups from Ridgewood. An attendant pointed me in the direction of a crowd that waited by a corner, buzzing with anticipation. I noticed that this crowd was unlike most I’ve been surrounded by in art spaces; they were older, browner, Latin. Most likely, they were parents of the performers involved with Whoop Dee Doo. And so we waited together. The longer I stood with them the more I relished this feeling of being among by people from a similar background in a space so often dominated by white people. It was refreshing, even comforting. It was as if I were on a trip with my family, about to share in the strangeness of the creative pursuits that separates us.

As the doors opened we entered a complex maze of blankets, cardboard, and foil. I heard parents joking that they would get lost. I heard laughter riddled with confusion. There was an overwhelming sense that something exciting was about to happen. The path led to the interior of an interstellar base. It was a handmade fantasy excursion, with mood lighting and sounds of space all creating a playful atmosphere infused with mystery.

I nestled myself on the pillows on the floor beside some excited children and bewildered parents and watched intently as the show began. There were volunteers in alien costumes and children holding fake cameras. Whoop Dee Doo’s co-founders took the stage: Matt Roche played the role of a werewolf with deadpan wit, while Jaimie Warren wore a milkshake costume as she acted like an overly excited host of a kids’ TV show ready to fill the room with her energy. Together they made the perfect match for awkward banter that the crowd of Latin parents enjoyed. (Some non-English-speaking parents listened through translation audio equipment donated by Immigrant Movement International, a social project initiated by artist Tania Bruguera.)

The performances featured two groups from Ñukanchik Llakta Wawakuna, an organization that celebrates Andean heritage through dance, one of seven- to eleven-year-olds and the other of four- to six-year-olds (the group’s name means “our kids from our village” in the Kichwa language, spoken primarily in Ecuador and Colombia). The comic hosting style of Warren and Roche, along with the spaceship look of the installation, provided an engaging environment for the array of traditional music and dance. The Wawakuna performed a “Martian mind-reading game,” wherein their smiling heads poked out of a cardboard console as the hosts picked volunteers to have their minds read. Then the Calpulli Community, a Queens-based company that focuses on folkloric dance and musical traditions of Mexico (for kids aged six to fifteen) came on stage to play instruments and dance. Following that, members of a teen group from the Maspeth Town Hall community center led a “meteor shower contest.” Two lucky kids from the audience competed to see who could hit some goofy-looking aliens with the most foam “meteors.” Finally, the Wawakuna appeared again, now transformed into Martian versions of themselves.

Founded by Warren and Roche in Kansas City, Missouri, in 2008, Whoop Dee Doo moved to New York in 2013. They were inspired by their need to bring culture to their small city, and felt encouraged by a local group they briefly collaborated with there called Late Night Theatre, a troupe of drag performers, actors, and writers. ”Their shows were great and, maybe more influential to us, they threw incredible parties with highly theatrical performances,” Roche said in an interview. They asked members of Late Night Theater to host skits and contests at shows under the Whoop Dee Doo name. Roche and Warren created the sets and costumes. “After the first year or two Matt and I slowly evolved into hosting roles,” Warren said.

Today, their shows incorporate local dance, performance, and musical groups comprising children and young adults. Their work bridges community organizing and art education. They introduce children to the culture of making whatever they want by inviting them to a free workshop where they produce a spectacle and, most important, learn basic art techniques in the process. “The Maspeth Town Hall students were involved in brainstorming ideas for the show,” Roche said. “They helped come up with ideas for the contests and many general space-themed touches.”

Whoop Dee Doo’s founders are both white. They work with underserved youth groups. They use all the money given to them toward making massive installations and working with kids, involving themselves physically and emotionally with every project. When offered hotel stays by partner organizations, they instead crash on friends’ couches and redirect the expenses to support the projects. Recognizing your privilege, let alone using it to support other communities, is rare, especially in the art world. To do that honestly and put everything you have toward creating a memorable time for kids takes love, patience, and the awareness that creative pursuits are not equally available to everyone. Whoop Dee Doo does this work without including people for the sake of diversity but rather building environments where creativity and connection can prosper. “We want people to feel more connected with the other people around them. We want unlikely groups to bond over a shared experience,” Roche said. “You are giving them this incredibly involved one-on-one experience that is often based around their ideas,” Warren said. “It sort of changes their ideas of what is possible.”