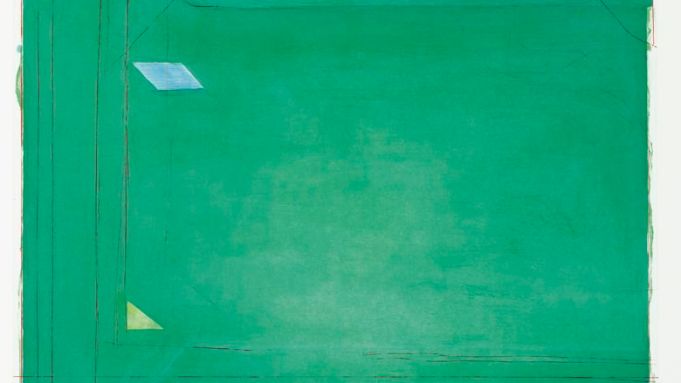 The top end of the print market is picking up, judging from the recent prints and multiples auctions in New York, at Phillips de Pury, Christie’s and Sotheby’s. New York dealer Susan Sheehan told A.iA., “Paintings and sculpture for big-name artists—blue-chip, with a well-established history—are priced so high that the prints must seem cheap by comparison. It’s shocking—absolutely shocking—how well the print market is doing, at least in large-scale images by major artists.”

At Phillips de Pury’s first-ever evening print sale, on Apr. 21, a complete 1972 Mao portfolio, by Andy Warhol, sold for $938,500, rising above its $600,000–800,000 estimate. (All sales prices here include premiums and taxes.) “This is among the top three prices ever achieved for that portfolio,” said Phillips de Pury’s print expert, Cary Leibowitz.

In another Warhol lot, the house was clearly banking on excitement about the royal wedding; a photo of William and Kate appeared, a tad meretriciously, on the same catalogue page as Queen Elizabeth II of the United Kingdom, from the 1985 “Reigning Queens” portfolio. Did the ploy pay? Estimated at $35,000–$45,000, this queen sold for $62,500. (There was a rather stinging rebuff later, however, when a Warhol car crash from the 1978 Disaster Series failed to meet its lofty $200,000–300,000 estimate and was bought it.)

Especially striking in the top 10 were an etching by Lucian Freud, Lord Goodman in Yellow Pyjamas (1987), which sold for $92,500, more than 50 percent above its high estimate ($60,000); and Sol LeWitt’s set of 75 screenprints—displayed in their totality for the occasion—Lines in Two Directions and in Five Colors with All Their Combinations, 1981, estimated at $50,000–70,000. “They looked just amazing installed,” observed Leibowitz. Apparently so: they sold for $86,500.

Phillips de Pury should be commended for taking some risks with more contemporary work—a gamble that sometimes paid off (Ellen Gallagher’s superb mixed-medium Bouffant Pride, 2002, at $32,500, inches above its $30,000 high estimate) and sometimes didn’t (Guillermo Kuitca’s equally fine cyanotype Neufert Suite, of the same year, estimated at $18,000–25,000 and was bought in).

Among the other prints selling well at Christie’s was Rauschenberg’s Booster, the 6-foot-tall litho and screenprint from 1967 that presents a full-body X-ray of the artist—a macabre take on self-portraiture for the times. Estimated at $80,000–120,000, it achieved $134,500.

A fever for Picasso ceramics reignited at Christie’s on Apr. 27, when the house held a special sale of a private collection of these objects. The “white glove sale”—100 percent of lots sold—totaled $1,887,125. This was a dandy result for 151 lots, most selling above their estimates-often well above, as with the top lot, the cheerful painted white earthenware Aztec Vase with Four Faces, 1957, estimated at $30,000–50,000, which peaked at $134,500.

The top lot at Sotheby’s on Apr. 29 was Henri Matisse’s languid Grande Odalisque à la Culotte Bayadère, a silky black-and-white litho that sold within estimate for $422,500.  (The house brought in $8,477,768 in its two sessions, with 89.5 percent of 304 lots sold.) More surprising were the third- and second-place lots, which both print records for their artists. Jacques Villon’s Les Cartes ou le Réussite, a 1903 aquatint of a card-player in dishabille, small dog perched nearby, rocketed above its high estimate of $100,000 to sell for $248,500. Louise Bourgeois’s landmark set of nine engravings from 1947, He Disappeared Into Complete Silence, nearly quadrupled its high estimate of $80,000, selling for $314,000 to a private European collector.

“I was bidding on that one,” said Sheehan, ruefully. “It is a very, very special set—though it had condition problems.” If she had succeeded in purchasing it, “I would have split it up.”

The printmaker Carol Weaver, who with her husband and partner Felix Harlan worked frequently with Bourgeois over many years, and knows better than just about anyone the value of that set of prints, was stunned by the sale, and pleased. (Harlan & Weaver helped Bourgeois re-create the plates, which had been lost, for a “re-do” of the book version, in 2005.) “This group of prints could be seen as one of Louise’s first major works as an American woman artist,” Weaver commented. “They mark a transition from the two-dimensional work she was doing in painting to three-dimensional work such as the ‘Personages.'” She added, “Although it is one of several known copies from an edition, it is hard to place a value on a work which is this important.”

Unlike Sheehan, Weaver is a primary-market player, and she has seen dark times for new prints these past few years.  “It’s been a little better this spring, though,” she reported. “We’re going to keep going.” Among Harlan & Weaver’s recent publications are intaglios by James Siena, Chris Martin and Joanne Greenbaum.

As a postscript: it’s always fun to find a print to follow from house to house. My choice this time was David Hockney’s Lithographic Water Made of Lines, Crayons and Two Blue Washes, 1978–80. Produced originally in an edition of 85, plus 18 artist’s proofs, at Tyler Graphics, it appeared at all three sales-and each time edged up: at Phillips de Pury, selling for $32,500, at Christie’s for $37,500 and at Sotheby’s for $40,625. Buyers must have been tired of this fitful spring, and found Hockney’s diving board over a sun-drenched pool irresistible.

Read Faye Hirsch’s report on the online sale of prints.

Rob Zombie, Alice Cooper Will Transform Into ‘Freaks on Parade’ This Summer