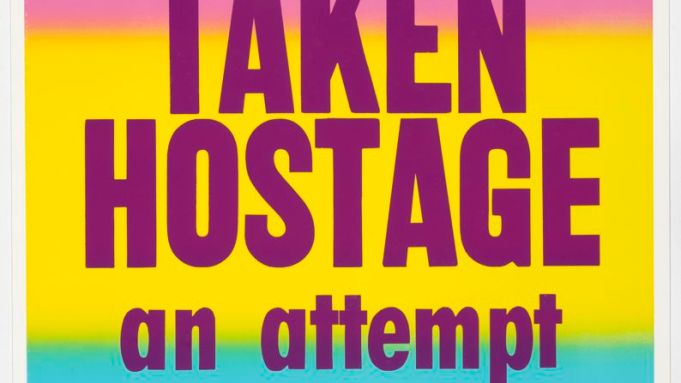 For years, the department of Prints and Illustrated Books at New York’s Museum of Modern Art has expanded the limits of its ostensible specialization. Under the tenure of Deborah Wye in the 1990s and continuing with current head Christophe Cherix, who arrived in 2007, the department has assiduously sought out all manner of print-related works, not only limited editions and deluxe livres d’artistes but ephemera, installations, discrete objects and mass editions.

Three times since 1980—roughly every decade-and-a-half—the department has taken stock of developments in prints, mounting a large exhibition of works drawn mainly, though not exclusively, from its collections. The current survey “Print/Out,” curated by Cherix, who was assisted by Kim Conaty, and installed on the sixth floor, takes an ambitious approach to what have been seismic changes in recent years, not least due to burgeoning technologies. “The idea was to show that the medium is not fixed, that it does not present just one story,” says Cherix, who aims with his exhibition to address not only the objecthood of prints, but the notion of dissemination inherent to the medium. “These artists are operating all over the world; there is no center any more. And the new technologies they have integrated make the work more apt to be spread instantaneously, rather than following traditional routes of distribution.”

Choosing some 70 projects or series from the museum’s collection, along with a few loans, Cherix has made an unorthodox presentation as well as selection. The exhibition was designed in collaboration with Mevis and Van Deursen of Amsterdam, who also designed the vivid catalogue, in which images are arranged against blocks of dotted pages, in imitation of offset printing’s raster dots. Echoing that effect, in the sixth-floor installation, selected walls are covered with dots then hung salon style with prints. At least one portfolio is broken up: Damien Hirst’s The Last Supper (1999), 13 large screenprints composed to look like European pharmaceutical labels but with names of food substituted for those of drugs. Hirst’s prints appear here and there throughout the show, rather than all together as would conventionally be the case, creating for the visitor a sense of déjà vu and stressing that prints can be in more than one place at one time.

Other kinds of potentialities are explored, as well. The Danish collective SUPERFLEX is restaging its live workshop Copy Light/Factory (2008) (acquired by MoMA in 2011) for the duration of the show. Printing out reproductions of famous lamp designs on site, the trio of artists—or their surrogates—mount the reproductions on wooden armatures fitted with lighting apparatus to create new lamps, thus wryly circumventing copyrights.

One gallery is crisscrossed by clotheslines holding Thomas Schütte’s Wattwanderung (Low-Tide Wandering), 2001, 139 etchings that the artist, self-taught in the medium, made over the course of one year, as a diary. Another small room appears to be hung with blank sheets of paper, but when the lights automatically switch off, images materialize on the paper in phosphorescent inks.

Among the prints in this glow-in-the-dark series—Philippe Parreno’s “Fade to Black” (2003)—are a typescript describing the artist’s collaboration with Rirkrit Tiravanija and a photograph of a performance in which Parreno had children reenact a famous soccer match. “It’s a flickering memory of his practice,” says Cherix. “He wanted to create a series of images which would relate to past events without illustrating them.” Elsewhere, Tiravanija’s 80-foot-long Untitled 2008-2011 (The Map of the Land of Feelings) is draped unframed over two walls. At the center of the room is a vitrine that groups together a number of the artist’s multiples involving camping and cooking gear.

“Every time an artist reproduces a work, a new work is created,” Cherix observes, addressing the various contexts engendered by multiplicity. Of course, contextual relativism has been inherent in the medium from its beginnings in the 15th century. But “today you have to ask yourself where the work is, physically,” says Cherix. He refers to Martin Kippenberger’s “Inhalt auf Reisen” (Content on Tour), 1992, which opens the exhibition. Assigning assistants to make replicas of his paintings, Kippenberger chopped up the copies, displayed them in a garbage bin installation that he photographed, creating from his “documentation” of the bin a series of screenprints of fragmented images mounted on different sizes of plywood. “It’s a process of transferring information from one medium to another, rather than simply saying, ‘the work is that image,'” says Cherix. In a sense, “the work is not the image. It’s just one iteration of a complex process.” Cherix insists that even the most straightforward-seeming works on display, considered with such displacements in mind, begin to feel less obvious, as digital technologies have facilitated the recycling and rethinking of work in other mediums.

On the second floor, in the department’s galleries, is the related exhibition “Printin'”, selected by artist Ellen Gallagher with associate curator Sarah Suzuki. Gallagher and Suzuki have assembled works from MoMA and elsewhere by more than 50 artists-not just editions but unique works. The centerpiece is Gallagher’s portfolio DeLuxe (2004–05), which is installed on a wall of its own. For this 60-print work, executed at Two Palms Press in New York, she appropriated imagery from a variety of mass-media sources, in particular vintage African-American style magazines, which she altered with a veritable barrage of techniques and materials (photogravure, etching, litho, Plasticine, enamel, varnish, glitter, velvet, et al.). “DeLuxe set the bar for printmaking in the 21st century,” observes Suzuki.

While elliptically alluding to issues of race and miscegenation, the exhibition avoids even a whiff of didacticism. The title, “Printin,'” is not merely a pun on the title of the show upstairs. The graphic that greets visitors at the white-on-black raster dot entrance (a visual link to “Print/Out”) includes an image of George Herriman’s cartoon characters Krazy Kat and Ignatz. Intrigued with Herriman’s biography as a person of mixed race who “passed,” as well as with his comics, which bore a  sub rosa critique of race and gender, Gallagher titled the show with a word reminiscent of the bizarre patois that Herriman’s characters speak. (An example of the Krazy Kat comics was also borrowed for the exhibition.)

The curatorial selections present ingenious deployments of medium and material. They range from straight prints by the likes of Paul Klee, Vija Celmins and Louise Bourgeois to those made more unconventionally, like Not Vital’s large etching Kiss (1996), in which the artist placed actual dead lambs on the treated surface, creating an image in which their silhouettes look as through they are kissing.

And there are many works that are not prints at all (or even multiples). In Simon Fujiwara’s video installation, Artists’ Book Club: Hakuruberri Fuin non Monogatari (2010), the artist stages a faux talk-show interview in which he discusses Huck Finn in a thick, deliberately exaggerated Japanese accent. There is a Kool-Aid drawing by David Hammons, covered by a sheet, which may be viewed by appointment only; a box by Joseph Cornell; a synthetic fur painting by Sylvie Fleury. Under headphones, one can hear Theaster Gates reading (beautifully) a translation of Aimé Césaire’s Corps Perdu, while looking at a copy of Picasso’s rendition of the Martinique-born author’s work.

“Print/Out” and “Printin'” are on view through May 14. The 235-page catalogue—a work of printed art as much as anything in the shows—includes interviews with artists as well as texts by Cherix and Suzuki.