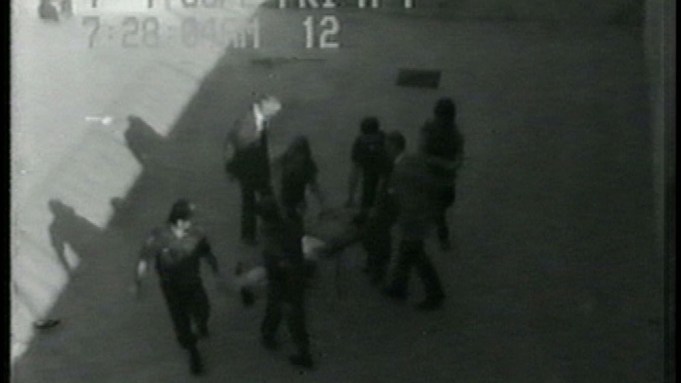 In a 2012 essay on prison abolition in n+1, Christopher Glazek argued that, “rather than embodying the model of Bentham/Foucault’s panopticon—that is, one of total surveillance—America’s prisons are its blind spots.” His point is hauntingly embodied by a photograph of my cousin sent home by the prison where he is incarcerated: a portrait in which he is posed in front of a printed backdrop of a landscape with green trees and blue skies. Instead of providing a snapshot of his life inside, the photograph literally covered it up. The series “Prison Images,” at Anthology Film Archives through July 26, grapples with this problem: the invisibility of prisoners, and the challenges of adequately representing incarceration. Since prisoners are stripped of many tools for self-representation, whether access to cameras or the right to vote, the responsibility to tell their stories largely falls on others, complicating recent debates about representing and speaking for marginalized populations. This series, featuring forty-one experimental films and artists’ videos, augments sensational reports on the nightly news and mainstream fictional portrayals like “Orange is the New Black” and The Shawshank Redemption.

The first part of the series, “Incarceration and the Cinema,” presented both fictional and documentary films that address conceptions of prisons in the collective consciousness. Given that the United States has the highest incarceration rate in the entire world, it’s unsurprising that even foreign filmmakers, among them Brett Story and Harun Farocki, seem fixated on the American prison system. Though there has recently been increased attention to the conditions faced by prisoners—from the growing visibility of violence against transgender inmates, to protests like the one at Brooklyn’s Metropolitan Detention Center this past February, when inmates banged on their windows to signal that they were being held without heat during the polar vortex—the series makes clear that the issues inmates face today have a disturbingly steady history.

As Don Siegel’s Riot in Cell Block 11 (1954) reminds us, it remains extremely difficult to enact reform when the system robs agency from individual actors by design. This black-and-white drama depicts inmates organizing a riot at an American prison, whose sympathetic warden supports their demands to end guard brutality and overcrowding. Ultimately, neither the warden nor the inmates are able to effect change; they get only empty promises in exchange for peacefully ending their protest. The film ends on a hopeful note: riot leader James Dunn (Neville Brand) receives a longer sentence for his actions, but the warden reassures him that the protest advocated for the rights of prisoners across the country and received extensive press coverage—though he isn’t allowed to read the paper himself to see how he was represented.

Farocki’s Prison Images (2000), from which the series takes its title, juxtaposes clips from films depicting prisons—several of which are also included in Anthology’s series, among them Jean Genet’s Un Chant d’amour (1950), in which a guard watches in on masturbating inmates who, in turn, perform for him—with actual prison surveillance footage. In one clip, a security camera catches an inmate’s visiting girlfriend flirtatiously inching her chair toward her boyfriend’s until the chair legs touch, a proxy for forbidden physical contact during their visit. Another clip of German prison propaganda from 1943 positions incarcerated shoemakers as contributing to society and rehabilitating themselves through work—and at little to no cost to the companies, who of course reap the greatest benefits.

Today, American corporations massively benefit from abusive forms of prison labor. This is central to what theorist Jackie Wang calls “carceral capitalism”: she argues that “carceral techniques of the state are shaped by—and work in tandem with—the imperatives of global capitalism.” Wang’s view is indirectly affirmed by many of the films screened in “Prison Images.” Brett Story’s documentary The Prison in Twelve Landscapes (2016), for instance, comprises twelve short vignettes about communities other than inmates affected by the prison-industrial complex. In one, residents of a town in eastern Kentucky that was founded by a now-defunct coal company express gratitude for the federal prison that has provided the majority of their jobs. In another, a New York entrepreneur sells prison-approved items to families sending care packages: belts with buckles smaller than one inch, underwear without elastics. In St. Louis, a black woman is sent to jail for not paying a fine incurred after failing to secure the lid on her trashcan. The prison economy extends well beyond incarcerated laborers.

Films in the series often take up the prison as a symbol of confinement and lack of agency. In Space Ghost (2007), Laurie Jo Reynolds plays recordings of phone calls with her brother in prison while her camera is pointed at the television she watches from home. Her brother usually has little to say because it’s so boring—not like in the movies, which portray prison as a place full of violence and riots. She often watches space programs showing astronauts floating in the void or trapped in small spacecrafts. They become stand-ins for her brother’s existential woes. Directors also employ prison as a site to test out social experiments. Stephanie Rothman’s outstanding thriller Terminal Island (1973) imagines sending all murderers to a desert island and having them fend for themselves so as to protect society without spending taxpayer money. The women sent to the island all experience sexual violence—as do most of the female inmates throughout the series. There’s also a lot of cinéma vérité in “Prison Images,” as in Les Prisons Aussi (1973), made by the activist collective Le group d’information sur les prisons (GIP) which comprises interviews with former inmates about life inside. GIP, whose members included Michel Foucault, was disturbed that journalists were denied access to French penitentiaries. The recurrence of this documentary style reflects a desire to know and share a truth that’s deliberately hidden.

The second part of the series, “Art by Inmates” (July 18–26), shows a selection of sixteen rarely seen works made in collaboration with inmates. Most of the films are shorts that resulted from prison workshops with visiting artists or filmmakers. John Reilly’s documentary Godot in San Quentin (1988), for instance, records a production of Samuel Beckett’s play Waiting for Godot staged by inmates at San Quentin State Prison in California, the largest in the country. In interviews, the inmates state they were surprised to learn that Beckett was never a prisoner since his words spoke piercingly to their experience of confinement. Reilly suggests that these inmate-performers aren’t acting at all: waiting indefinitely for nothing in particular is their everyday life in prison. I wondered whether the performers were paid for their work, or if this creative outlet was supposed to be compensation enough.

Art’s usefulness for inmates is questioned throughout the films in “Art by Inmates.” In Art and the Prison Crisis (1982), inmates in California prisons discuss their creative outlets. Some inmates describe ceramics as a distraction from reality, and as something that makes them feel like they are contributing positively to the world. An instructor speaks about an unnamed prisoner who made a guitar from cardboard and drew on frets and strings, since actual strings are contraband. Using chord books, he taught himself to play the guitar without any sound. It’s unclear if his story is poetic and empowering, evidence of deprivation, or both.

All of the films present prison as a site where power is abused, some more explicitly than others. Spanning nearly a century, the films collectively suggest the impossibility of reform, as the same concerns repeatedly reemerge. Curator Evelyn Emile’s selections make clear that attempts to see inside prisons with a camera—and by extension, to know what’s going on inside and keep powers in check—feel strange, wrong, contrived, and sometimes even perverse. This ostensibly truth-recording apparatus is antithetical to the nature of prisons, where abuse of power is permissible precisely because it’s nearly invisible. But even worse would be to perpetuate this invisibility by making no films at all.