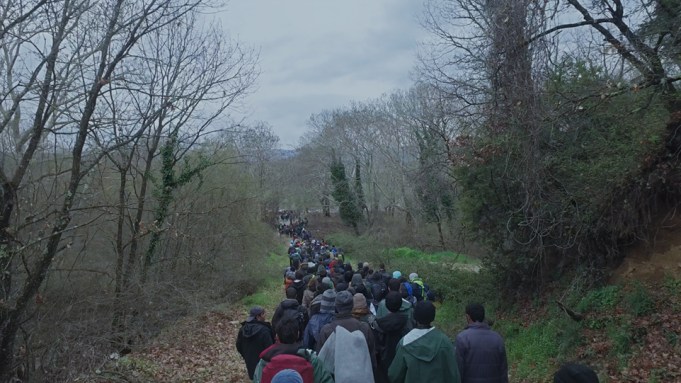 Is Ai Weiwei too famous? That question has shadowed the Chinese artist-activist, now sixty, throughout his career. Early on, naysayers (often fellow artists manifestly jealous of his success) pointed to Ai’s family connections, his outsized personality, his alleged opportunism, and his undeniable cunning. Then in 2009 the art star, attempting to attend the trial of a fellow dissident, suffered a brain hemorrhage at the hands of security officers. Two years later, his new Shanghai studio was demolished, and he was later detained by authorities in Beijing for eighty-one days (though repeatedly threatened with a sentence of thirty years), giving pause to those—perhaps including Ai himself—who thought that massive notoriety had made him untouchable.

Upon his release, Ai became an even bigger media sensation—arguably the world’s best-known living artist, unrepentant in his in ongoing disparagement of China’s political system. Just last week, the old factory building that served as his major production facility in Beijing was demolished ahead of schedule, causing damage to some of his artworks. Nevertheless, skeptics (usually themselves innocent of any direct effort to alleviate human suffering) have repeatedly charged Ai with making work that aestheticizes tragedies such as the 2008 Sichuan earthquake and using the current global refugee crisis to boost his own renown. His response to such sniping is characteristically terse: “If I’m not intimidated by the Chinese government,” he said in an interview, “do you think I give a fuck what people in the art world say about me?” It’s a question worth contemplating.

The occasion for our conversation was Ai’s July 19 acceptance of the International Artist Award from the Anderson Ranch residency and workshop in Snowmass, Colorado, near Aspen. The honor—previously bestowed on Frank Stella, Carrie Mae Weems, Bill Viola, Theaster Gates, and others—recognizes recipients for their artistic accomplishments and influence. In Ai’s case, however, it follows a string of humanitarian prizes that includes the 2011 Bianca Jagger Human Rights Foundation Award for Courage, the 2012 Václav Havel Prize for Creative Dissent from the Human Rights Foundation, and the 2015 Ambassador of Conscience Award from Amnesty International.

The celebratory event at Anderson Ranch included a public dialogue with Alexandra Munroe, senior curator of Asian art at the Guggenheim Museum in New York, who began the exchange by declaring her long-standing “love” for Ai and (with a finely tuned sense of mid-afternoon, summer-retreat audience) continued in that deeply adulatory vein for the next hour. The artist’s mass migration documentary Human Flow (2017) was shown in an Aspen theater, and he shared honoree status at the gala dinner with collectors Bunny Burson, artist, and Charles Burson, former chief of staff for Vice President Al Gore, who together garnered the Service to the Arts Award.

Although he is now, despite speaking no German, the Einstein Visiting Professor at the Berlin University of the Arts, Ai noted in our tête-á-tête that he essentially lives in airports. Over the last three years, he realized projects in roughly a hundred and fifty internationals locales, gave four hundred press interviews, and himself conversed with some six hundred migrants. Human Flow required visiting forty refugee camps in twenty-three countries.

The problem that the film addresses, Ai said, continues to grow—at the rate of thirty-four thousand per day (about one every two seconds). There are now sixty-eight and a half million displaced people worldwide, more than half of them under the age of eighteen. Of these, only one or two percent are in Europe, where media attention concentrates. The rest—for example, nine hundred thousand in Bangladesh alone—are spread across Africa, the Middle East, Asia, and the Americas.

While US citizens obsess about their southern border these days, ninety percent of all migrants, according to Ai, go to countries that generate only two percent of global GDP. They reside, on average, twenty-five years in their “temporary” camps. Although the vast majority are fleeing war, many are classed not as refugees but as “guests,” which deprives them of international rights and protections. At present, less than five percent are eventually integrated into their host countries. As the migration continues to mount, virtually all countries have become more stringent in their admissions policies or closed their borders to the destitute altogether.

Ai’s empathy stems in part from personal experience. “My father was a refugee,” he says. Ai Qing, one of China’s most revered modern poets, studied in Paris during the early phase of the Chinese Civil War and was imprisoned by the Nationalists for three years upon his return. Thereafter, he gained favor with Mao, even advising him on cultural matters in the caves of Yan’an—the Chinese equivalent of consulting with General Washington at Valley Forge. Yet the poet was later accused of “rightism” and internally exiled (thus gaining himself and his heirs bona fides among today’s dissidents). In 1979, after twenty-one years of enforced silence, he was “rehabilitated” and appointed vice chairman of the Chinese Writers Association (thus attaining high status among the country’s cultural elite).

Human Flow, beautifully shot, eschews expert talking heads to focus—sometime in long takes of overloaded boats arriving on beaches, sometimes in sweeping overviews of immense desolate camps, most often in intimate portraits of migrants trying to meet their everyday needs—on the individual experiences that make up this mass catastrophe. The refugees’ occasional athletic togs and ubiquitous cell phones help to diminish viewer distance, which is soon overcome by the sheer pathos of the depicted facts. In a typical scene, a man from Afghanistan, penniless after giving the last of his money to smugglers, stands in a raw potter’s field and tearfully shuffles through the ID cards of family members, counting off those who died at home or in transit and asking aloud what he can possibly do next.

Some viewers have criticized Ai for occasionally appearing onscreen in Human Flow—playfully “trading passports” with a male refugee, handing tissues to a woman who weeps uncontrollably with her back to the camera, giving a haircut to a migrant who shares the artist’s bulky physique. Yet, because he neither openly rails nor whines, even when one camp is demolished by French police, Ai stands in for the rest of us: too privileged to be directly threatened by the events, too compassionate not to be outraged and saddened. He says several times to his subjects not “I feel your pain” but, more humbly, “I respect you.”

“Intelligence is a form of making,” Ai told his Snowmass audience. At 140 minutes, the film is too long by at least half an hour, inducing the very crisis fatigue, the despair and numbness, it aims to counteract. Even Ai admits that “you come to realize there’s not much you can do personally.” International aid agencies are seen helping out here and there, but it soon becomes overwhelmingly evident that only governments, acting on a coordinated basis, can hope to alleviate the calamity. Yet, when I asked which country’s immigration policies are most enlightened or what the ideal treatment of refugees would be, Ai had no concrete answer, no model to propose.

His ideas for amelioration are stimulating but pie-in-the-sky. “The solution is up to the Great Powers,” he says. “Most of these people are escaping from armed conflicts. Maybe rich nations should chip in funds proportionate to their share of the global arms trade. And do artists generally, in his opinion, have an obligation to respond to the social ills of their time? “If you are human, you have a responsibility. Whether it should come out in your work—that’s up to you. Do it if it gives you pleasure. I do it because I have no choice.”

Ai’s resort to generalities is a typical survival strategy among socially conscious artists in China. The technique also, in a deeper cultural sense, recalls of the role of the sage in Chinese tradition, where “wisdom”—often in the form of astrology, geomancy, folk medicine, and fortune-telling—still addresses issues that would be subjected to empiricism and logic in the post-Enlightenment West. It is no accident that American collector and art entrepreneur Larry Warsh, who was attentively on hand in Snowmass, has not only spearheaded production of Ai’s sculpture group Circle of Animals/Zodiac Heads (2011) but also edited two small books of the artist’s sayings and tweets (Weiwei-isms, 2013, and Humanity, 2018, both Princeton University Press). “We know so much, and care so little,” Ai said to his Colorado listeners. Such aphorisms can mean almost anything heartwarming and noble, while deftly avoiding direct criticism of particular officials, policies, and actions—the kind of specific critique that has gotten hundreds of lawyers and other activists incarcerated in China, most notably Nobel laureate Liu Xiaobo, who died in custody last year.

What does all this tell us? Simply that Ai has the foibles of any human being and, indeed, any hero. This case, like many, is one where the best antidote to trendy self-righteousness is a little honest self-examination. Would I be any braver, any morally purer, in Ai Weiwei’s place? Would you? Criticize this gadfly’s motives, if you like, but let the art world denizen who has done more for today’s global dispossessed cast the first aspersion.

Moët & Chandon Celebrates the Holidays by Unveiling the ‘Your Voices’ Sculpture With Emily Ratajkowski, Daniel Kaluuya and More

Deal Alert: Google Nest Hub Is At Its Lowest Price Ever And Includes WiZ Smart Bulb