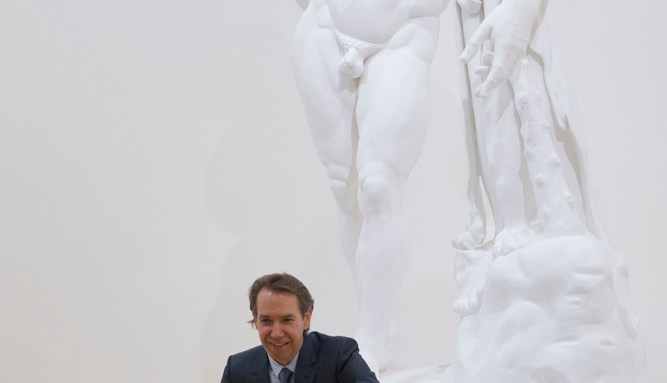 “You’re probably the only person, aside from me and Jeff, who has seen the show at all three venues,” Scott Rothkopf said when I told him that I caught Jeff Koons’s retrospective at the Whitney Museum in New York last fall, the Centre Pompidou in Paris last winter, and at the Guggenheim Bilbao, where it remains on view through Sept. 27. I was there in June with a large group of international journalists for a press preview of the exhibition, which ends its run in the Basque port city, along with Rothkopf, who organized the show and was recently promoted to chief curator at the Whitney.

For most people—arts professionals and tourists alike—discussions of Bilbao immediately bring to mind the Guggenheim outpost there, which opened in 1997. The cultural destination quickly revitalized Bilbao, the second largest Basque city (after San Sebastián), then in steep economic decline. But the “Bilbao Effect” (or the “Guggenheim Effect” to Bilbaoans), which refers to the practice of relying on a world-famous architect (like Frank Gehry, who designed the museum) to bring a rush of tourist dollars to under-known towns, has proven difficult to repeat.

Gehry’s soaring titanium, glass and limestone building, situated along a bend in the Bilbao River, is genuinely spectacular no matter how it is approached. Some of his designs, like the recently opened Fondation Louis Vuitton in Paris, feel cramped and complicated to navigate, as if viewing art there were an afterthought. The Guggenheim Bilbao, on the other hand, is airy and light-filled, and doesn’t provoke the did-I-miss-anything? panic that can befall even the most experienced museumgoer.

In Bilbao, Koons’s 40-year, chronologically installed retrospective—charting his course from “The New,” a series from the early 1980s of pristine, never-used vacuum cleaners encased in plexiglass vitrines; to the sexually explicit “Made in Heaven” (1989-91) billboard-style paintings that almost ended his career; to the more recent “Gazing Ball” (2013) sculptures—has room to breathe. The Guggenheim exhibition included about two-thirds the number of works that were on view at the Whitney, spread out over 10,000 more square feet of exhibition space, providing some much-needed elbow room. This is especially crucial given the number of visitors the museum expects: the Guggenheim Bilbao usually welcomes half of its annual visitors during the summer and early fall months, and is anticipating 400,000 to come out for Koons (compared to the 320,000 who visited show at the Whitney).

Rothkopf, who joined the Whitney in 2009, and a year later completed his PhD dissertation on Koons, had long thought this was a show that “needed to be done,” he explained at the press event. He’d been working on it for five years, and had been thinking about curating a Koons retrospective before he even worked in a museum. Referring to the artist’s ongoing “Celebration” series—highly polished stainless steel sculptures (of balloon dogs, tulips, Easter eggs) and holiday-themed photorealistic paintings—during a tour of the show, Rothkopf remarked upon its “sense of joy and wonder not always associated with contemporary art.”

Koons, meanwhile, was in his element, with a captive audience of international journalists hanging on his every word. His aw-shucks egotism (more than once he drew a line from Velázquez to Picasso to himself, and mentioned his connection to Manet and Courbet) is partially masked by his youthful handsomeness and by the dreamy way he speaks about both art history and self-improvement. Like a cross between a yoga teacher and a preacher at a new age megachurch, Koons spoke frequently of the importance of working towards self-acceptance and removing the twin poisons of anxiety and judgment. “Art has tremendous power to bring people together,” he explained. “Transcendence” was an oft-repeated word. It was easy to drink the Koons Kool-Aid until he began to pronounce his disinterest in money or technology. “I don’t think about technology other than as a tool. New ideas come from reflection, honesty and truth, not from technology.”

“I hope the public feels like they are participating in a Dionysian festival,” Koons said, referring to Puppy (1992), the 41-foot-tall West Highland Terrier covered in colorful flowers and installed in the museum’s courtyard. The verdant sculpture has become synonymous with the museum, and in some ways the city of Bilbao, since the Guggenheim purchased it in 1997. The show itself—well-curated, beautifully installed, and a true retrospective in that it includes examples from every one of the artist’s series—is, thankfully, not the raucous sensory overload that Koons imagines Puppy to be. As Rothkopf quipped, tracing the trajectory of Koons’s career provides a “finger in the socket, sugar jolt of Pop art.”

Moët & Chandon Celebrates the Holidays by Unveiling the ‘Your Voices’ Sculpture With Emily Ratajkowski, Daniel Kaluuya and More

Get in the Holiday Spirit With 30% off Tees From Homage