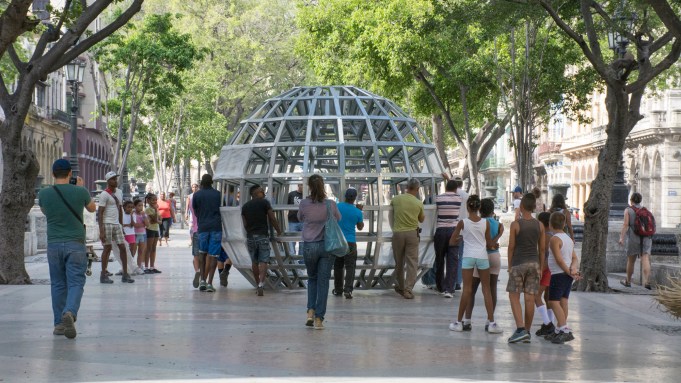 For the past eight years, I’ve focused on co-creating sculptures that address public food, energy production and cyclical water use. These works have almost entirely been created for people in the United States. My most recent sculpture, Pull,  was created through a cultural exchange led by the Museo Nacional de Bellas Artes de la Habana and the Bronx Museum of the Arts as a collective effort alongside the 12th Bienal de La Habana, titled “Between the Idea and the Experience.” The artwork consists of two mobile, inhabitable spheres that contain living ecosystems. One of the spheres of Pull currently functions as a temporary autonomous zone in Havana’s Parque Central, while the other half is stationed inside the Museo Nacional de Bellas Artes as part of exhibition “Wild Noise” (through Aug. 16).

I tracked international news on Cuba throughout my formative years, mythologizing the country that created a local resilience plan based on barter, large-scale urban farming and public service to survive everything from trade embargos imposed by the United States to the economic collapse of the Soviet Union during the Special Period. In my ongoing studies of resilience, Cuba features prominently.

In preparation for the project I spent over two months in Cuba this past spring, working closely with a collaborative team of art students, architects, organizers and teachers based in Havana to create the structures and internal living systems. Inside the spheres’ wide, hollow and netted walls, water is collected to grow plants that support fish, songbirds and insects. We carried the two parts of Pull from Havana’s Playa neighborhood by truck, van and bike. On May 17, we dragged them through the Malecón and to various sites in Old Havana, before reaching Parque Central via Paseo del Prado in a procession that attracted a crowd as we walked.

Pulling a large sphere full of precarious ecosystems to Havana’s Parque Central in order to create an autonomous zone first required maneuvering within the local government. To date, the physical route of Pull across the city has trailed a laborious, protracted series of permits. Without a clear procedure in place we repeatedly presented offices with written testimonies from multiple parties involved in the project, along with our request. Returning to the offices every few days, we would learn about additional requirements, fulfill them and return later to the same news. As with navigating New York City’s layered and overlapping governmental agencies, which all subscribe to the “C.Y.A.” (cover your ass) methodology, we learned to map out each physical location according to potential necessary permits and apply for them all. I believe that patient and persistent attempts to maneuver through the Kafkaesque cyclical maze of urban regulations and policies can be an effective way to work toward policy change. In the end, our group’s endurance gained us permission to install the first temporary artwork in nearly a decade on the Parque Central.

Many of the materials that comprise the sculpture Pull have painful histories. Partially constructed from U.S. army surplus materials transformed into tools for interdependent ecosystems, the sculpture proposes a nonmilitary economy. In two trips, parachute netting turned into translucent walls and air hoses turned into watering devices were carried from the United States in the form of excess baggage by Minnesota-based charter Sun Country (well known for their many charters that supported Operation Desert Storm in the early 1990s). The bulk of supplies, meanwhile, was sourced within the network of Cuba’s informal markets, and we redesigned the structure based on what we could locate. In a country where cars and homes are more commonly traded than bought or sold, bartering could be easier than using cash.

“If you see something in a store and have the means, buy it,” the logic goes, because you know someone who needs it, or because you won’t be able to find it when you need it. While this rang true consistently for me, I quickly adopted the everywoman inventor mentality, realizing that searching for plumbing glue is never as practical as fitting a scrap of hard foam into a crevice and sealing it with paint.

Trying to find bolts and self-tapping screws could often devolve into a several-hour challenge. We once went to the corner of Neptuno and Soledad to talk with the gentleman sitting in a chair in front of a shuttered storefront. He then directed us to a side street and told us to look for a man named David. David met us on the corner and directed us inside his home, which contained the leftovers of a hardware store as well as more recent stock. He sold us self-tapping screws for one Cuban peso each, and then asked if we needed any wiring while there. Thinking we could use wiring for something, we bought it then and there, because otherwise we feared we wouldn’t be able to find it when we needed it. We made sure we got David’s cell-phone number, hoping he could find something else for us if we were in a pinch and could pay.

Finding wood to build the spheres’ two bases, which imply flotation in their design, required dismantling discarded carpet-covered benches, dismembering ladders and stripping the side of an abandoned shed in Alamar. There was virtually no wood to buy, aside from the facade of a shipping crate being returned to Belgium, which we purchased through a back-door negotiation. Driving to harvest plant clippings from the Jardín Botánico Nacional, on the outskirts of Havana, we made our way through the unmarked streets in El Hueco (a neighborhood whose name is translated as “the gap”) and reached a worn-down cul-de-sac on the edge of the motorway Autopista Este-Oeste. Arriving at a half-hidden dirt road, we located a gas station where our car could be filled by hand with gas from Venezuela for a fraction of the price of anywhere else in the city. Of course we asked to purchase their empty 55-gallon drums. Our inability to find particular materials produced a clumsy ingenuity. I sifted through communal bins of discarded organic matter on my walks home looking for broken pottery, and spent a few nights trying to fit pieces together.

More straightforward was creating the regenerating habitats inside Pull. Based on Cuba’s Organopónicos resilience strategy, the interiors of the sculptures fed themselves. We created small aquaponic systems with freshwater fish in tanks, a form of permaculture. Edible plants were abundant and easily obtainable. We were trusted to temporarily care for several songbirds—a common pet throughout Cuba, one laden with symbolic and nostalgic overtones—in a balcony-based aviary. Prior to the biennial’s opening, a friend dropped off two chickens. They nested beneath the sphere and laid eggs that visitors took with them.

While living and working in Cuba, I discussed personal and political struggles with artists and art workers. Sometimes artists described struggling alongside the socialist government as it works to stay afloat despite authoritarian global capitalism that robs the land, animals and people who share the planet. Others described struggling against a government that has unevenly distributed prosperity in the form of educational opportunities and material goods to a revolutionary cohort.

Yet, for contemporary artists in Cuba, the island can currently be a bubble. From a monetary perspective, after the tourist industry, art generates some of the largest influx of international currency. (With two separate currencies, residents navigate between the international CUC and the Moneda Nacional, or the Cuban peso). While there, I witnessed international blue-chip gallery directors soliciting recommendations for local artists in order to expand the appeal of their stable, while hundreds of U.S.-based collectors visited artists’ studios by the busload looking for something exceptional. It seemed the steps involved in making one’s way to Cuba (from visa to travel arrangements to affidavit) were inconvenient enough to convince even the stingiest collector to bring something home.

Of status similar to movie stars and professional athletes in the United States, artists are among the few groups in the country occupying such privileged societal positions. The government (well known for championing regime-supportive art) understands the potential power of cultural producers and therefore largely controls the media and many forms of public speech. Many Cuban citizens seem well accustomed to suppression of speech, and habituated to reading symbolic significance. Too many of the artists I met chose to make nonpolitical artwork, describing themselves as “ready to move on” from topics that have become “too easy” and “too expected,” while other artists I met, such as Wilfredo Prieto and Alexandre Arrechea, engaged with politics carefully or covertly. A smaller cohort of contemporary artists consider themselves activists.

For decades, international news organizations have reported cases of surveillance and silencing of politically active artists, including the still-incarcerated Danilo Maldonado (“El Sexto”) and the recently arrested Tania Bruguera. Yet conversations about Cuba’s lack of basic human rights always returned to a frustrated comparison with the United States government, a government also known worldwide for violating human rights, and one that has led a debilitating propaganda campaign against Cuba for more than 50 years.

Sometimes I believe we share very similar experiences. And at other times, I felt a mixture of astonishment and even awe over our divergent experiences. An archivist in Havana attempted to explain to me the artist’s place in Cuban society by recalling what her ailing father had said to her when she married a young artist: “I’m so proud of you, you are in the art world. I no longer have to worry about your future. Now I can die.”