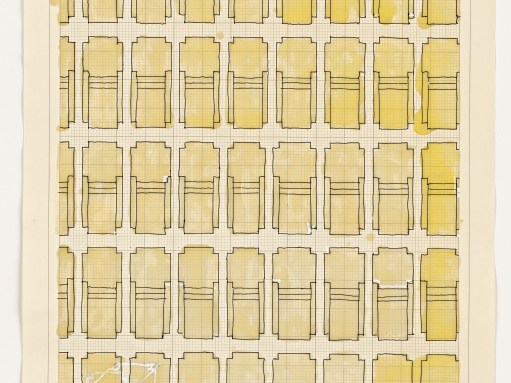 In her catalogue essay for this first survey of Rachel Whiteread’s drawings, Hammer Museum curator Allegra Pesenti admits that the artist regards the works on paper as a diary of her sculpture. But Pesenti makes a case for their autonomy. While being privy to the drawingsis “like stealing an invitationto [Whiteread’s] private realm of thought,” they are “produced parallel to and independent of her sculpture,” Pesenti contends, suggesting that they are far more important than mere studies.

Museums are not generally in the business of dimming the aura around artists, and the Hammer duly keeps Whiteread’s aglow, attributing to the drawings the principal concern of her sculpture: to describe emptiness by solidifying space. Having first gained widespread attention for casting in concrete the interior of a Victorian sitting room (Ghost, 1990), and stirring controversy by applying the same technique to the interior of a condemned row house (House, 1993, which won her the Turner prize), Whiteread has been credited with creating sculpture of visceral and psychic intensity. Her three-dimensional work favors the indexical format of the death mask and bears, in Pesenti’s words, “the communal traces of mankind.” The drawings in the Hammer show are presented in nine themed galleries that each focus on things White-read has cast: chairs and tables; floors; beds and mattresses; baths, plinths and slabs; houses and stairs; doors, windows, doorknobs and switches; a water tower; boxes; and a hot water bottle. In all, 155 works on paper spanning 20 years are shown, accompanied by eight cast sculptures. As semi-biographical ballast, the exhibition also includes two wall vitrines, containing about 200 objects in all. One vitrine holds dozens of manipulated postcards, some of them with circular holes punched out, others overlaid with gold leaf or collaged with brightly colored paper. The second case contains objects—from shoe trees and a Slinky to dollhouse furniture and a faux skull—that have inspired Whiteread in one way or another.

Lambent or chalky, and sometimes both, the most notable drawings in the show are in the first two galleries. “Chairs and Tables” features various floor plans relating to the early sculptures derived from these items of furniture; some drawings isolate formal differences between viscous mediums. In One Hundred Spaces (1995), resin thinned to a wash emphasizes the chemical effects of staining on the paper substrate. Flap (1989) foregrounds the physical behavior of varnish, which, like a nappe of water cascading over a dam, produces a softened contour. In both drawings, the amber spectrum is shorthand for how light operates in relation to translucent solid objects—in these examples, resin casts of the spaces under chairs and tables.

In the second gallery, “Floors,” are some works that look like linear scaffolds or frameworks, and others that resemble overhead views of cast-floor sculptures. The simple pencil and gouache grid in Floor Study (2000), for example, is a layout of a floor sculpture Whiteread made in Munich. It is accompanied by the unrelated floor piece Untitled Floor (Thirty-Six), 2002, a quadrangle of 36 squares cast in gray aluminum. The connections Whiteread’s sculpture has with Minimalism—physical literalism, industrial materials and techniques, simple geometry and impersonality—are especially evident in this work, whichclearly acknowledges floor pieces by Carl Andre, such as Twenty-Fifth Steel Cardinal (1974). In addition to grids, other elements, among them herringbone patterns and parallel lines, appear in the floor drawings; surfaces include white, black and finely gridded paper. In several, the inked outlines are filled in with a honey-hued wash of varnish, resin or watercolor. Elsewhere, curt strokes of correction fluid—a liquid polymer—jostle with red, black or yellow outlines. Where the opaque black ink sometimes builds up dense weaves of layered screens, the liquid polymer creates thin veils. The texture and color of some drawings in the show—glassy or syrupy; battleship gray, plastery or sugary white—echo the palette and surfaces of Whiteread’s sculptures.

Apart from these chromatic and textural parallels, the drawings differ radically from Whiteread’s work in three dimensions, which is far more rigorously geometric. Some zigzag drawings in the “Floors” gallery evoke design ideas seldom seen in the sculpture. The drawn compositions seem jerry-built and wobbly, as if vulnerable to the lightest of winds. In Black and White Floor (2001), for instance, inverted and upright switchbacks read as woven surfaces strung up on shaky axes. In Study for “Floor” (Perspective), 1993, the supine, lateral V’s rendered in red ink are more naturalistic: they resemble floorboards stripped off their joists. Another floor drawing, Study for “Wax Floor” (1992), features a rectangular section of golden-buffed flooring that has slid away from its rails, seeming to buckle and lift off the graph paper. This flexibility of outline, at odds with White-read’s orderly three-dimensional work, lends the drawings an artless quality.

In the “Beds and Mattresses” gallery, certain drawings are so absorbed with exploring the visual and physical chemistry of liquid mediums that they indeed seem completely independent of the sculptures to which they relate. In Untitled (Double Mattress Yellow),1991, watercolor, ink and acrylic meet in limpid, intersecting waves. This formal exercise is paired in the gallery with Untitled (Double Amber Bed), 1991, Whiteread’s flame-colored rubber and foam sculpture of a slumped double-size mattress, which is intended as a commentary on homelessness in London. In the drawing, this form is suggested by what look like two champagne-hued Pop-Tarts—they might have been painted by Wayne Thiebaud. That they are in fact mattresses with a story is immaterial; their sunny disposition is utterly at odds with the related sculpture. And while the sculpture is annotated by a wall label telling us it is a meditation on a social problem, the mattress drawings are pleasantly unmoored from such commentary. Like the other sculpturally referential drawings, they consequently become free to play. This is a mixed blessing, exposing the drawings’ basic character: lovely whimsicality.

Because the drawings do not have the sculpture’s public profile, they are not supported by its rhetoric. They are not compelled by Whiteread’s commitment to expressing the equivalence between void and potential volume, whether under tables or in the spaces of history. Nor are they touched by the idea that memorializing cultural traces is a worthy endeavor for public art. In their capacity as foils for the sculpture, the drawings magnify the colorless intellectuality of Whiteread’s approach, which treats the concretization of memory and absence as if it were a movable stage set that can be adjusted for different theatrical spaces with little trouble. Her sculptural strategy looks equally good in Holocaust Memorial (1995-2000), a monument on Vienna’s Judenplatz to Austrian Jews killed by the Nazis—it evokes the 1933 public burning in Berlin of Jewish books—and in the mass sepulchre of the humdrum that she created in Embankment (2005), for Tate Modern’s Turbine Hall in London, where she placed polyethylene casts of 14,000 cardboard boxes.

The tendency in Whiteread’s sculpture to consistently monumentalize varying objects and ideas not only flattens the differences between them but also implies profundities in all. Going by size, the ethnically targeted biblioclasm suggested by Holocaust Memorial, which looks like an inverted library, is a modest tragedy compared to the fate of the orphaned boxes in Embankment. Whiteread is not to blame for the size of the Turbine Hall, which demands monumental work. But the mighty celebration of detritus from capitalist over-production, by an artist who has earned accolades for revealing the social side effects of unchecked private real-estate development (in House), betrays some ideological confusion. The drawings address these discrepancies indirectly. By virtue of their uniformly disposable prettiness, they deal an unwitting critique to the sculpture’s bloodless and essentialist vocabulary. Even the best-regarded of White-read’s public works take few risks, though by virtue of their quasi-activist ambitions, civic patronage and public context they are often seen to have scaled mountains.

It is not inaccurate to describe the drawings as “independent” things. They do charm, but they wouldn’t have won the credibility granted by a retrospective without the special claims of the white-cube sculpture with a bleeding heart.

“Rachel Whiteread Drawings” is at the Hammer Museum, L.A., through Apr. 25. It travels to the Nasher Sculpture Center, Dallas [May 22-Aug. 15], and Tate Britain, London [Sept. 8, 2010-Jan. 16, 2011], and is accompanied by a catalogue with essays by curator Allegra Pesenti and Ann Gallagher, head of British art collections at the Tate, London.

Prajna Desai is a writer based in Los Angeles.