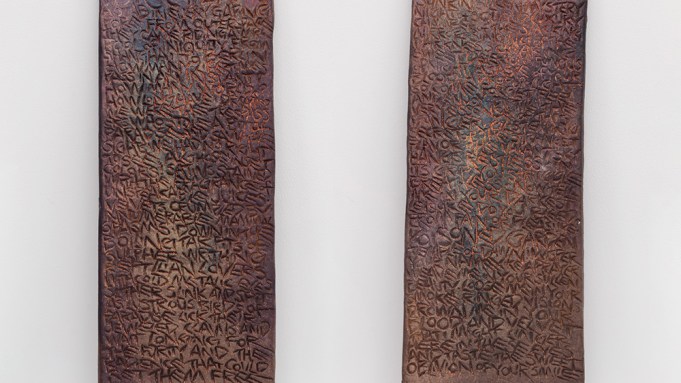 The revelatory retrospective of Martin Wong at the Bronx Museum, which Eleanor Heartney addresses in this month’s issue of A.i.A, focuses on his painting—a brick-red, thickly spaced world of Lower East Side tenements, Chinatown ornament, glimpsed windows, robust firemen and daredevil skaters—at the expense of his poetry. Language is all over his paintings, from graffiti to inscriptions to sentences spelled out by pudgy hands forming the letters of the American Sign Language alphabet. But those inscriptions tend to be taken from other people, most often from the poet and playwright Miguel Piñero. Wong put little of his own writing in his mature work. “Voices,” an exhibition at P.P.O.W. Gallery curated by Dino Dincer Sirin and Anneliis Beadnell, makes up for that omission, and offers insights into how the ear and the voice of his later paintings came to be.

Wong wrote with pen and ink on long rolls of paper, and stored his poems as scrolls. Unfurled, they hang on the rear wall and the column of P.P.O.W.’s main gallery, which also includes a selection of small sculptures and paintings, in a roughly symmetrical ensemble that summons the solemn atmosphere of a temple hung with sacred texts. It feels appropriate to the eclectic, druggy mysticism of Wong’s writings, which are populated by sewer goddesses, twilight children, psychic bandits and prehistoric beasts. They seem to have been written in a trance: his hand moved quickly, hurrying to keep up with the wild flux of his visions, losing itself to the rhythm of the pen striking the page as it moved toward the end of the scroll. It takes a little effort to decipher the words; like bugs or other critters, they emerge and recede in a thicket of curved and angled lines.

At times the formal properties of Wong’s calligraphy overshadows his lyric stylings. When he writes rhymed verse, it usually comes out as doggerel: “Wind is writing/ in the grass below / leaving its image / as it flows / lovers walking / sometimes talking / laffing running / as they go.” He often leaves the G’s off his gerunds, after the lazy articulations of a pop song. Music makes it easier to swallow trite lyrics, and the rhythms of Wong’s calligraphy have the same effect on the page, shifting attention away from the words’ meaning and letting them cohere as an image, just as a tune shapes lyrics into song. And yet, when Wong writes free verse, you can get caught up in the vivid pictures that he conjures and the runaway meters of his fervid imagination: “Shredded satin stained with the fragrance of unspeakable juices velvet crumpled by innumerable mammal spasms—down in the boiling tarpits of sulphur writhing reptilian lovers with cold metalic eyes slither slink and spit as lustrous birds of paradise lick their jeweled claws and wait longing for a purity and a radience that could set them free [. . .]” Wong’s punctuation is sparse as his imagery is dense, and in these free verse writings, where the words run flush to both edges of the scroll without line breaks, it’s hard to know where one phrase ends and the next begins.

Rainbow Brain (1983-84), a poem on vellum and the latest scroll included in the exhibition, feels like a turning point from Wong’s youthful calligraphy to the ASL iconography of his later paintings. In those, as in Rainbow Brain, hands with meaty palms and neatly curved nails form ASL letters, with Latin equivalents painted on cufflinks as a gloss for the hearing. But in Rainbow Brain the hands are drawn as spare black outlines, without the fleshy shading of oil paint, and they expand and contract in size from line to line, which charges the page with the same nervy energy as the earlier scrolls. While in his poetry Wong seems to draw inspiration from the inky strokes of classical Chinese calligraphy, the blocky order of the ASL paintings from the 1980s and ‘90s seems to mimic the print on Chinatown signs, as if he used ASL letters as an idiosyncratic kind of ideograph.

Perhaps it’s too pat an interpretation, but the blend of languages and styles in Rainbow Brain feels like a fitting analogue to Wong’s restless relationship to his own identity. He was Chinese-American but he couldn’t read Chinese. He wasn’t deaf but he knew ASL. He was gay, he had AIDS, he knew many of the members of ACT-UP, but he didn’t join them. He wasn’t Puerto Rican but he admired and adopted Nuyorican style. Whether by choice, by blood or by orientation, Wong affiliated himself with many groups, but he never committed himself fully to any of them. “Voices” speaks to the development of that promiscuous personality, showcasing forms and codes of communication as eager, vibrant and intense as Wong himself was.