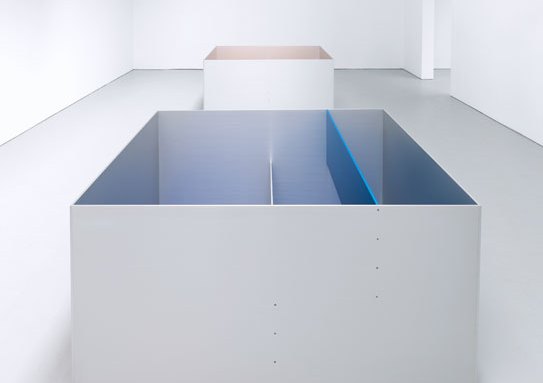 Donald Judd’s life and legacy get the celluloid treatment on Saturday, the final day of an exhibition of his work at David Zwirner. Marfa Voices, co-directed by his actor-director-artist daughter Rainer Judd and Karen Bernstein, is a series of recorded interviews initally proposed as radio programmig for the Judd Foundation’s Oral History Project. “I just felt like if we were going to get all these people together it would be a shame not to film them,” says Rainer Judd.

In spite of his death in 1994, Judd’s exacting, industrially fabricated works of wood, metal, concrete, and Plexiglas continue to redefine the critical interpretations of space, craft and medium. The nine works on view at Zwirner, culled from a group of 12 first shown in 1989 at Germany’s Staatliche Kunsthalle Baden-Baden, are hewn from anodized aluminum. The box-like forms are defined inside by various anodized dividers and blue, black, and amber Plexi panels.

Judd’s 25-minute film features twenty residents of Marfa and New Yorkers who contributed to Judd’s life in Texas, ranging from gardener Lorina Naegele and landscape designer Billy Spencer to New York dealer Paula Cooper and Rainer’s mother, Julie Finch. While much of the film is light and anecdotal, local attorney Carl Ryan makes a poignant observation about Judd’s move to Marfa that sets the tone for the film: “Artists always like to talk about tension and juxtapostion, and that’s what’s going on here, and has been going on here, since the day Don came.”

Rainer explains to A.i.A. that those tensions and the juxtapositions often emerged from quotidien matters. “Don would object to the grain feed trucks running their motors all night long or try to get the military from flying really close to the ranch houses in jets,” she says. “We [The Judd Foundation] are not as volatile members of the community as my dad was. He was a good old activist. Don and my mom were really steeped in the fact that you had a responsibility to stick up for your street corner.” But Rainer adds that the Foundation did carry on in her father’s spirit by boycotting a proposed nuclear dump site in 1995. It never got built.

Judd studied film at New York University. Her early films included Plague Circuit about a time-traveling epidemiologist who questions his mortality when he finds all his patients are well. Instant End examines the speed of modern society. More recent shorts, A Little Wonder and Remember Back, Remember When, are fictional portals to life in Marfa growing up under her famous father.

“I feel very drawn to understanding the generation that came before me, and the generation before that,” she says. “I’m very interested when people talk about the moment between Pollock, Newman, De Kooning and Don and after him, Richard Serra and Brice Marden. I feel compelled to share what I know about what came before. Maybe it’s a product of getting older—I’m 40—but you realize younger people have no concept of this, and they’re curious.”

In 2008, Rainer released Remember Back Remember When, a fictionalized 10-minute window onto her parents’ marital troubles in Marfa. It featured the explosive side of her classically calm father (played by Martin Donovan), who takes the kids by force after a seemingly unprovoked fight. She’s currently at work on a script for a feature length “clarification.”

Cartier Bracelets Can’t Be Authenticated, but These Alternatives Are Just as Good (and Affordable)