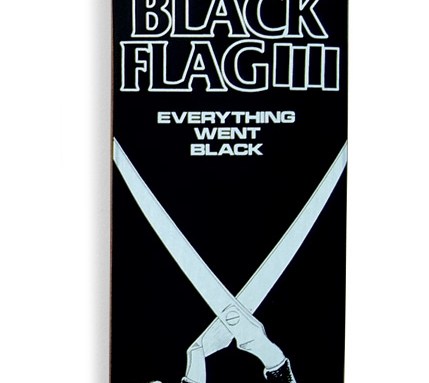 The annals of contemporary art are full of improbable trajectories, tales of women and men developing into widely celebrated artists from the most unlikely beginnings. Think, for instance, of Pinot-Gallizio, the middle-aged Italian pharmacist who assisted at the birth of Situationism and invented a radical painting practice in the provincial town of Alba in the 1950s, or Marcel Broodthaers, a Belgian poet who one day decided to create something “insincere” and thus launched what would ultimately be a hugely influential art career and a new genre of art-making (institutional critique). The path taken by Raymond Pettibon, one of the most admired artists of the last decade, is also out of the ordinary, especially when compared to the current MFA-program-to-gallery-to-museum conveyor belt that nearly every successful young artist must ride.

A recent exhibition at Specific Object/David Platzker, a bookstore-gallery tucked away in a corner of the massive Starrett-Lehigh Building in Chelsea, did an excellent job of tracing Pettibon’s activities in the late 1970s and early ’80s, when his drawings and ’zines emerged amid the violent cacophony of the Los Angeles punk scene. Platzker has recently been utilizing the space to show off his accomplishments as an entrepreneurial archivist: last season he covered the walls with a copy of every one of the 156 artist-designed bulletins issued by Art & Project, the important Dutch venue for conceptual art. Although the Pettibon show occupied only a single room, it packed in a formidable amount of material. One wall was filled with a chronologically arranged collection of nearly 200 flyers, each of them sporting a Pettibon image, for concerts by nearly every important West Coast punk band. Mostly on standard 8½-by-11-inch sheets and nearly all on white paper, the flyers are offset-printed with the exception of a couple of faded photocopies. On the facing wall was a collection of posters and record jackets (LPs and 45s, plus a few cassettes). The other two walls featured a display of Pettibon’s books in vitrines and an assortment of skateboards, T-shirts, posters and stickers imprinted with his work. Another T-shirt graced a mannequin standing in a corner. Music by West Coast punk bands played continuously in the gallery, albeit at uncharacteristically low volume.

For those who know Pettibon’s later work, certain early flyers jump out as premonitions. A handbill advertising anApr. 12, 1982, gig by Black Flag, No Sisters, VIPs and Secret Service at Berkeley Square features a bare arm onto which someone has just carved the word “malaise” with a razor (visible in the drawing). The drawing has that characteristic Pettibon line—at once nervously tentative and brutally definitive—and the carved word has been written in his equally distinctive uppercase lettering. Razors, that favored accoutrement of punk style, show up quite a lot in Pettibon’s early images, usually in the hands of and applied to the bodies of women.

Like his punk cohorts, Pettibon has always been attracted to socially transgressive imagery. Charles Manson is a frequent guest in his drawings, sometimes clearly identified (“Free Charlie,” advocates an editioned print from 1983 of a sword-wielding Manson) and sometimes, as in a handbill for a 1980 Black Flag concert at the Starwood, suggested by a Christlike figure. The skin-carving razors are also probably as indebted to Manson rituals as to punk fashion. As the Manson obsession suggests, Pettibon shares punk’s love-hate relationship with the countercultural 1960s. An offset print from 1982 of a revolver-toting lowlife carries the slogan “O.D. a Hippie.” Expanding on this anti-’60s program, and giving it a California-centric twist, the print further advises “Legalize heroin, ban hippies (and New Yorkers).” But if Pettibon posits Manson and heroin as the antithesis of all that peace and love bullshit, he also offers tributes to Jim Morrison’s penis and to interracial romance in Greenwich Village. What is conspicuously absent in this work is any visual reference to the actual punk scene of the time. Pettibon has said that he consciously avoided contemporary content. No doubt this has helped his early work to transcend its original moment, but an avoidance of the present also suits the nostalgic character of Pettibon’s imagination, which is obsessively attracted to past styles, both visual and literary.

Pettibon, who sometimes signed his work St. Pettibone (his given name is Raymond Ginn), was by no means the only artist utilizing the punk graphic-art underground as a venue. In England, Jamie Reid lent his ransom-note, Situationist-inspired style to the Sex Pistols; in San Francisco, the late Bruce Conner haunted Mabuhay Gardens, camera in hand, to chronicle the Bay Area punk scene. But Pettibon is probably the only major visual artist to emerge from the heart of any punk scene. Rather than attending art school, he studied economics at UCLA in the mid-1970s, yet instead of pursuing a career in business he devoted himself to creating artist’s books with titles like Captive Chains and Tripping Corpse. These black-and-white, staple-bound pamphlets trolled the seamy side of postwar America (many images were inspired by scenes on late-night TV broadcasts of B-movies), and were usually captioned with pithy phrases that suggest bizarre narratives worthy of Luis Buñuel or David Lynch. One of my favorites is a Black Flag/Meat Puppets handbill in which two long-haired dudes attend the graffitied corpse of a naked woman; “If you’re really Christ, why don’t you raise Janie?” one beseeches the other. (Should Pettibon be counted among those transgressive Catholic artists identified by critic Eleanor Heartney in her 2004 book Postmodern Heretics? Probably.) As time went on, the work was increasingly invaded by fragments from Pettibon’s voracious and sophisticated reading. (Henry James is one of his favored sources.)

Often, the same image will show up in several flyers and on record jackets and posters. One such repeating motif is a drawing of a boy crouching in the corner of a paint-splattered room. It was used for a 1980 Black Flag flyer and the cover of the band’s single “Six Pack.” The drawing plays off the old joke of a house painter painting himself into the corner of a room, but the brushstrokes hemming in this kid look like the work of a gestural abstractionist. The messy black marks are also rather excremental, prompting one to connect this picture to abjection-loving L.A. artists such as Mike Kelley, who was one of Pettibon’s early art-world champions, and Paul McCarthy.

The phase of Pettibon’s career covered by this show is inseparable from his brother Greg Ginn’s role as guitarist and motivating force of Black Flag which was L.A.’s preeminent punk band. Thus, as well as charting Pettibon’s artistic development, this show also offered a record of Black Flag’s fortunes, from its pre-Henry Rollins beginnings to its breakup in 1986. Along the way are some instantly iconic images, like a 1981 tour schedule for Black Flag that shows an aging, pudgy, almost naked Elvis nailed to a cross, with the accusatory caption “You didn’t love him enough.” Just below uppercase letters spelling out the band’s name across the top of this flier is the logo Pettibon devised for the band: four upright, slightly out of alignment black rectangles—imagine a multipanel painting by Ad Reinhardt hung at different levels. This minimalist device, seemingly so opposed to Pettibon’s blend of pulp imagery and literary quotation, appears on every Black Flag ad and product, from the countless flyers to record covers and skateboards. It’s a brilliant bit of branding, and a reminder that punk bands, like every other player in our culture, high or low, mainstream or underground, must compete to be heard.

In fact, there was a business model behind Pettibon’s early career. It can be seen in the merchandise lists for his books and prints that accompanied the records released by Black Flag, and the ads written into the margins of some flyers identifying the images as art from forthcoming artist’s books by Pettibon. For what now seem like ridiculously low prices, fans could order Pettibon’s work in signed and limited editions. His red-ink signature and edition numbers could be seen scrawled at the bottom of many of the prints on view at Specific Object. SST, the record label founded and run by Ginn, acted as the distributor of Pettibon’s work. Such DIY productions were central to punk. Usually this was a means to bypass the mainstream recording industry; here it also set up an alternative art world, creating a slew of teenage collectors.

Pettibon wasn’t above laughing at his own marketing efforts. Here’s how he prefaced a psychedelic-themed issue of Tripping Corpse: “Why is Pettibon, who’s been associated with punk up until now, doing a magazine like this? In one word, money. M-O-N-E-Y. You see there are more hippies than punks. Indeed, marijuana is the biggest cash crop in California, my home state, and as we all know, hippies like to look at drawings while they hallucinate.”

Speaking of money, the Pettibon ’zines that sold for $1.75 when first published now go for hundreds of dollars. Even the flyers, unsigned and in unknown editions, fetch relatively hefty prices. It’s the fate of every radical art movement to leave behind a market in printed ephemera. Will the handbills of the California punk scene one day become as important as those flyers and exhibition announcements produced by Dadaists, Surrealists, Situationists et al., material now deemed suitable for display in the vitrines of great museums? It’s certainly a likely fate for those that Pettibon had a hand in. What is it, apart from their connection to the activities of important artists, that makes these dated, sometimes tattered souvenirs of obscure, long-gone events so prized? Perhaps in some way the fragile, fugitive qualities of such printed matter are emblematic of the fleeting nature of the very phenomena they document.

The cutoff point of the Specific Object show was 1986. By that time, Pettibon’s relations with SST and Black Flag had soured. He was angered by the cavalier way his work was being used by his brother’s band and record label. Many of the handbills feature panels taken from the ’zines, sometimes cropped, combined and otherwise altered in ways unauthorized by the artist. A few Black Flag posters feature Pettibon’s drawings superimposed on brightly colored backgrounds. They probably made great ads for the band but they don’t look like anything else in Pettibon’s oeuvre. Ultimately, he had to retake control of his own art, and that meant moving from the punk underground into the official art world. The sequence of flyers at Specific Object ended with a small exhibition announcement for Pettibon’s first New York solo show, at Semaphore Gallery in SoHo. It marks the end of one noteworthy career and the beginning of another that is still very much in progress.