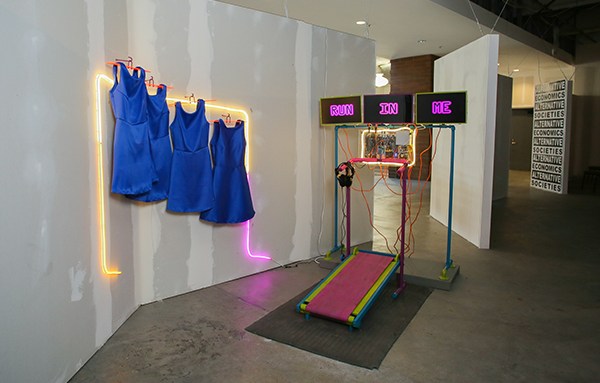 The Museum of Capitalism is unusual among institutions that call themselves museums. This is largely because it has no permanent location. After two years of planning, its first physical iteration is now open on the second floor of a massive, empty building in Oakland’s Jack London Square. When it closes on August 20, the building will presumably be empty again, but the Museum will continue to exist, its subsequent physical manifestation as yet undetermined.

The structure that currently houses the Museum is known as the Jack London Market. It was envisioned as a gigantic food hall for tourists. Developers got as far as building out stalls and plastering a quote from Virginia Woolf in vinyl letters on one of the walls: “One cannot think well, love well, sleep well, if one has not dined well.” The signage is odd, if not gloomy, in this immense temple to fiscal failure. Instead of the chattering voices of foodies, the dominant sound is the Amtrak train shaking the building’s walls as barrels past.

In other ways, though, the Museum of Capitalism is like any other museum. One must pass a desk where a security guard works all day, presumably beset by ennui as museumgoers sign in and file by.  There’s a gift shop that sells standard museum trinkets, like tote bags and T-shirts. It also sells ordinary items like pieces of coal and minor luxury products such as dried porcinis, with tags explaining that these were once the happy objects of tragically exploited labor and expensive consumer desire. This furthers the Museum’s central, imaginary conceit: that capitalism is a thing of the past. Finally, like almost every other art institution, the Museum’s programming is supported by the philanthropy of wealthy patrons. In this case, it’s the Emily Hall Tremaine Foundation, named for a woman whose family owned sheet metal factories that funded her passion for collecting art.

In a sense, every art museum is a “museum of capitalism” insofar as they are filled with works donated by patrons who accumulated fortunes through the exploitation of workers. It’s probably not surprising that the Museum doesn’t address the origin of the Tremaine family’s wealth, critically or otherwise. But this notable silence raises the question of whether or not—and how—the Museum offers a condemnation of capitalism at all. Perhaps “condemnation” is beside the point they are trying to make.

The Museum is organized by Fictilis, an artist duo made up of Timothy Furstnau and Andrea Steves, whose previous projects have explored systems of exchange in and around institutions. Furstnau has compared the Museum of Capitalism to other post hoc subject museums, like the museums of communism in Eastern Europe or the Apartheid Museum in Johannesburg. While those museums struggle to periodize historical conditions that have arguably not concluded, the Museum of Capitalism asks us to radically deny—in our imagination—conditions that can be witnessed right outside its doors. The works on display, many of which were commissioned for the exhibition, are ineluctably caught in this confusion of temporalities and moods.

Some works more or less iterate the Museum’s core concept of radical denial. Alberta-based Métis artist Amy Malbeuf’s Tarp (2017), for instance, represents the fantasy the Museum asks us to assume. The work is a big blue tarpaulin on the wall, with the word tarp inscribed on it with glass beads. The wall text describes the piece in a voice from the future. It defines what a tarp “was” in 2017, and then provides context: “In cities like Oakland, where capitalist development drove people out of homes, tarps became an important part of the improvised shelters which often appeared at the margins of urban areas.” While there is no doubt in my mind that Malbeuf made the piece in sympathy for and in solidarity with the staggering homeless population in Oakland, the fantasy risks increasing the conceptual distance between museumgoers and the displaced by making the reality of this crisis contrafactually pluperfect.

Other works also operate in the present without participating in the Museum’s core conceit or deflecting outrage. Sharon Daniel’s installation Undoing Time / PLEDGE (2013) addresses the catastrophic carceral system in California by presenting the work of a prisoner, in a profoundly pained but also uncompromisingly angry text sewn into an American flag. A video portrait accompanies the embroidery, permitting us to hear and see its maker. Christy Chow’s Come Run with Me 2 (2017) is a participatory sculpture that asks visitors to run on a shabby treadmill that purports to generate the production of commodities in a factory. It draws attention to the leisure of the wandering museumgoer by connecting physical exertion and discomfort to a representation of contemporary labor.

The Museum includes works by over sixty artists  working with a wide range of ideas, materials, and forms. One of the most striking works is Austrian artist Oliver Ressler’s Alternative Economies, Alternative Societies (2003-08), an epic twelve-channel video showing interviews with representatives of different party lines and political affiliations from around the world offering “alternatives” to capitalist life. Like Ressler’s subjects, each artist in the Museum brings a personal perspective on what capitalism is, the degree of its decline, and some measure of willingness to participate in the fantasy that it is over. Ressler’s project, both straightforward and neutral about the artist’s own political views, at least gestures toward how we might proceed as political subjects after leaving the Museum. Few of the other works do as much.

While the Museum follows through on its fantasy in great detail, from the bathroom signage (“The Capitalist Bathroom Experience”) to the chunks of coal for sale in the gift shop, there is no sense of how we arrived in this fictional better future. Maybe it will happen too quickly for anyone to notice what happened-the banks go bust in a puff of smoke. But who knows? In the Museum, Danish collective Superflex has installed Bankrupt Banks (2012), massive flags bearing the logos of financial institutions that have gone bankrupt or reorganized since the economic crisis of 2008. The artists understand this installation to be an open-ended work. That is, as more banks collapse, more flags can be raised. In the context of the Museum of Capitalism, perhaps we are asked to believe this is our condition now—that these institutions have ceased to administrate worldwide suffering and death. A mile down the street, near Oscar Grant Plaza in downtown Oakland, the banks often board up their windows so they aren’t shattered in protests. I suppose this is where the Museum of Capitalism leaves us: between the brutal reality and the tranquil dream.