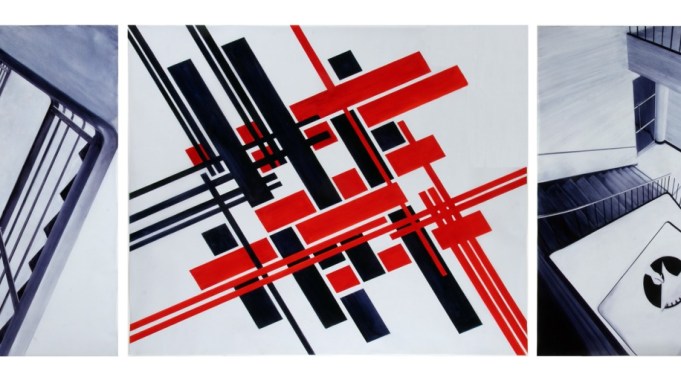 In her small East Williamsburg studio, artist Rebecca Chamberlain puts the finishing touches on her first solo show in New York, “. . . Wouldn’t it be sublime . . .” [opens May 14 at DODGE gallery]. Chamberlain will fill the large, two-story space with her delicately executed lithographic ink paintings. Several works willfully complicate high-modernist 2-D abstraction and architecture; the artist will present four painted plinths, which feature interiors painted on the front and back sides.

The paintings in this show use reproductions of mid-20th-century interiors as source material. Planning a painting, Chamberlain typically crops the source image, concentrating on a staircase or a hallway arch rather than the entire image, and giving the final piece a more abstract and unknowable mien. The method in which these interiors were shot inspires the artist—the shadows, soft lighting and moody points-of-view favored in midcentury interior photography gives her source material a cinematic feeling.

“I’ve tried to do work from film stills,” Chamberlain says. “But then it just becomes something else, a piece of art created from a film still, and that’s not really what I’m interested in.” Rather, the artist’s painted reinterpretations of interiors seem to become the stage for a scene yet to be played out-not one having already occurred.

A series of triptychs unite formal interior studies with reinterpretations of Josef Albers’s geometric abstractions. For Albers Rooms, Strand Palace Hotel and Gayfere House, 1928–1931 (2010), Chamberlain created a central panel that reproduces Albers’s Steps (1932). Installed in the “middle ground” between two opulent stairway interiors, the panel quietly addresses the continuum between design, decoration and fine art, using the Albers painting almost as a stand-in for the German artist’s identity as both a Bauhaus master and abstract painter. The image recalls the impossible puzzle of the endless staircase, created by L.S. and Roger Penrose in 1958, giving the work a feeling of being precisely designed, yet impracticable. Favoring spatial enigmas, Chamberlain seems most drawn to the way a place feels: the unspoken psychological and emotional implications inherent to architecture and interior design.

“I’m interested in stairways and hallways as interstitial spaces,” the artist says. “I’m also thinking about the points of anticipation in an interior or an image. The performative places, like a staircase, where one ascends and descends, as well as the places where one could hide and watch from behind the scenes.”

Chamberlain began studying ballet at age four. She auditioned for Joffrey and the School of American Ballet, until injuries became debilitating. She says, “My frustration grew bigger than my pleasure and I wanted to work alone basically—not in front of mirrors, not in front of audiences, not beside anyone.” Balletic references infuse Chamberlain’s work, in her interest in sweeping arches and refined curves that give well-designed interiors their sense of life and movement.

Chamberlain says that her earlier works focused on women in fashion, and how women presented themselves when they first began working in offices. A 2004 single-panel piece, Reception, Chicago 1935–1936, is painted in ballpoint pen ink (the artist developed a technique of draining Bic pens overnight and using the ink as paint, before moving on to her current lithographic ink following a dissatisfying encounter with Bic’s red ink). The work depicts an office interior with a slickness and luxury (lots of abstract art on the walls, sleek furnishings seemingly carved from glossy ebony), which appears like some silent prayer for  the industrial age.

“I was working in an office at the time, and I became obsessed more and more with office supplies, like the printed interiors of envelopes,” says the artist. “Then I started to look less at the women in offices, and more [carefully at] the offices they were working in.”

This latest body of work sees the artist addressing increasingly complicated issues. The art is an unadulterated exaltation of Modernism—yet its absence of figures induces viewers to wonder: did fantastic things really happen here? Or are the interiors Chamberlain investigates sites for a magnificent moment that could never really be?