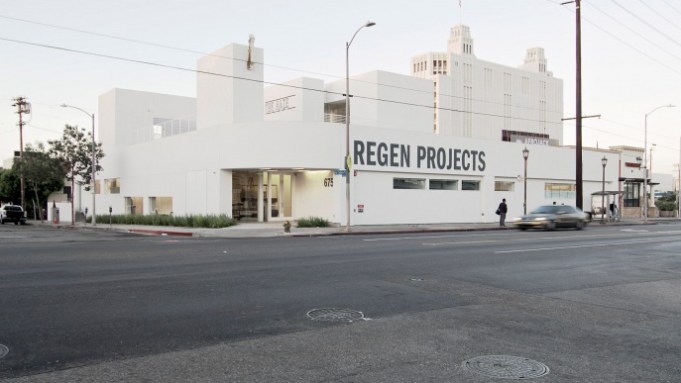 Los Angeles gallery Regen Projects has expanded its footprint, unveiling a new Hollywood location on Saturday. The inaugural show includes over thirty of the gallery’s artists including Doug Aitken and Lawrence Weiner.

Hollywood is relatively uncharted territory for the Los Angeles art world, with the majority of galleries concentrated in West LA and Culver City. Regen Projects joins Perry Rubenstein, which arrived in the area in June.

The new museum-like space was designed by Michael Maltzan, who has worked on several institutions and cultural centers, including the Hammer Museum and MoMA/PS1. Regen Projects new space is 20,000 square-feet, substantially larger than their former West Hollywood location.

A 4,000-square-foot, sky-lit main gallery can be partitioned. Two smaller rooms on the ground floor provide more intimate viewing, while upstairs, a 4,000-square-foot outdoor sculpture deck offers additional exhibition space and vistas of the city including the Hollywood sign, the Griffith Observatory, a taquería and 24-Hour Pawn Shop across the street.

Shaun Caley Regen founded the gallery in 1989 with her late husband Stuart Regen, son of New York art dealer Barbara Gladstone. Over the course of its 23-year history, the gallery has become known in Los Angeles and nationally for its representation of international artists, among them Wolfgang Tillmans and Anish Kapoor, in addition to its commitment to local talent including Catherine Opie, Raymond Pettibon and Liz Larner.

A handful of the artists featured in the opening exhibit are new to the Regen Projects roster, including Abraham Cruzvillegas, Sergej Jensen, Gabriel Kuri, Lizzie Fitch and Ryan Trecartin. The majority of pieces were commissioned from artists involved with the gallery for much or all of its history, such as Matthew Barney, Elliot Hundley, Glenn Ligon, Jack Pierson, Elizabeth Peyton, Andrea Zittel and Marilyn Minter. Most are for sale.

13 New TV Shows and Series to Watch in December