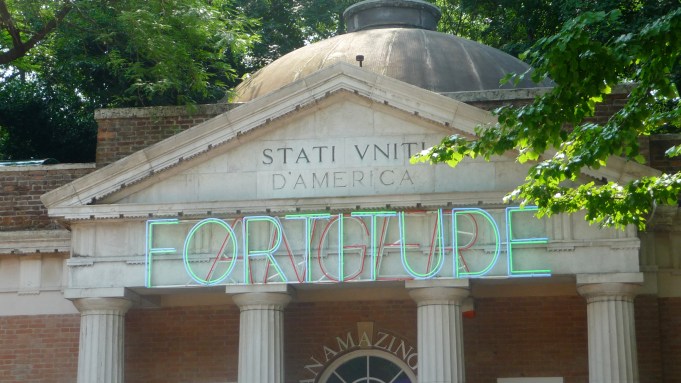 One of the most memorable works displayed in Robert Storr’s exhibition for the 52nd Venice Bennale was a double-headed fountain sculpture by artist Bruce Nauman. Recalling the beautifully sculpted marble fountains that feed water to Venetian piazzas and streets, the piece managed to resonate more profoundly with its site than many of the others in the exhibition. Nauman’s sculpture made direct reference to his seminal performance work, the photograph of which, Self Portrait as a Fountain (1966-67/70/2007), documents his seamless incorporation of the public realm (the Venetian streets) and the private realm of one’s own body. I was therefore delighted when Nauman was announced as the U.S. representative for this year’s Biennale. An ambitious undertaking organized by the Philadelphia Museum of Art in collaboration with two universities in Venice, and spans three different locales, the U.S. Pavilion doesn’t disappoint.

Nauman’s work resists containment: Vices and Virtues (1983-88) spills out onto the building’s façade, flashing mixed messages in colorful neon above the entrance. “FORTITUDE” flashes first, transposing quickly to “ANGER” (very apropos of the U.S.’s engagement with the broader world). Inside, viewers encounter works that deliver equal doses of violence, aggression, refinement and beauty. Hanging Carousel (George Skins a Fox) (1988) spins in one gallery, its gruesome video portrayal of an animal’s sacrifice accompanied by sculptural forms that suggest other victims of slaughter; such brutality is heightened by the decapitated cast heads suspended from the ceiling. More heads swing above a temporary pool to form Three Heads Fountain (Three Andrews) (2005). Although it’s not meant to be an interactive piece, the gallery guards were complaining about having to fish out coins that the occasional visitor tosses into the water. The motif of fragmented body parts continues in another room-sized installation titled Fifteen Pairs of Hands (1996). As its point-of-fact title suggests, fifteen pairs of hands making different gestures cast in bronze. In contrast to the more savage symbolism of the other sculptures, these expressive gestures console us, suggesting the human hand as a vehicle for creative expression.

Considering the title for Nauman’s Venice project, Topological Gardens, Curator Carlos Basualdo proffers the textbook definition of the term: Topology is the mathematical study of the properties of a geometric object that remains unchanged by deformation (such as bending, stretching or squeezing, but not breaking). While riding the vaporetto from one exhibition space to the other two U.S.-occupied venues, I was struck by the sinking palazzos on the Grand Canal. They seem to grow more misshapen every year, leaning this way and that, as their unstable infrastructures sinks unevenly into the sea. Yet as dilapidated as they appear, the palazzos somehow remain stable, buttressed by other, stronger structures nearby – a metaphor for the city’s enduring resilience.

In the other two venues, Universita Ca’ Foscari and the Universita Iuav di Venezia at Tolentini, site-specific works respond to their architectural context. At Tolentini, a sound installation dating from 1966 fills an arched, brick-walled corridor with oppressive sounds, as if a microphone is forcefully being muffled or silenced. Neon lights line the ceiling of another corridor, leading the way to the upstairs galleries. At Ca’ Foscari, Giorni (2009), a fourteen-channel sound installation recorded in collaboration with the staff and the students of the university is installed in a long hallway, sounding out voices that recount the days of the week in Italian. A companion sound installation at Tolentini features American voices sounding out the days of the week in English, suggesting a cultural exchange between the two. Basualdo suggests that the three sites chosen for Nauman’s project compose a phrase or thread that passes through the structural instabilities between the public and the private. Nauman’s success lies in his ability to transform that instability through by enmeshing his own personal vision with the context of the site.

Home of the Week: This $50 Million, 59-Acre Nashville Estate Is the Most Expensive in Tennessee’s History

The Best Whiskey, Cocktail and Booze Books To Read Now