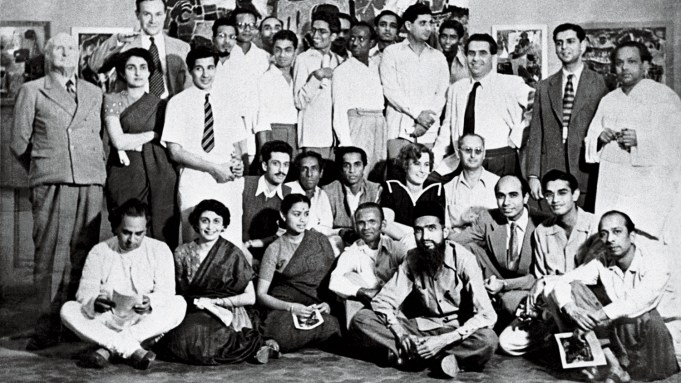 TO RUN INTO KEKOO GANDHY, whether at his old Gallery Chemould—on the first floor of the Jehangir Art Gallery, Bombay—or more recently, at its successor, Chemould Prescott Road, directed by his daughter Shireen, was to be drawn instantly into his latest scheme for sweeping reform in India’s art institutions. When Kekoo died on Nov. 10, 2012, aged 92, he took with him a nation-size archive and an intimate knowledge of the epic debates and invisible micro-politics that shaped the postcolonial Indian art world.

One of independent India’s earliest gallerists, Kekoo was a pioneer who helped formulate the contours of that art world. Gallery Chemould evolved organically in 1963 from his frame-making establishment, itself born during the 1940s from his collaboration with a group of connoisseurs and entrepreneurs who had foreseen the rise of Indian art in the aftermath of World War II. Although a student at Cambridge University, Kekoo had found himself stranded back home by the war. He soon made the acquaintance of Emmanuel Schlesinger, Rudolf von Leyden and Walter Langhammer: all Jewish or part-Jewish eÌmigreÌs from a Mitteleuropa eclipsed by Nazism, who made Bombay their home and extended their patronage to the city’s young painters. Some of these proteÌgeÌs would soon form the legendary Progressive Artists Group, F.N. Souza, M.F. Husain and S.H. Raza among them. Later, Kekoo would work together with the industrialist and collector Cowasji Jehangir, and the nuclear scientist and painter Homi Bhabha, to establish Bombay’s first public venue for modern art, the Jehangir Art Gallery, in 1952.

Chemould’s name carries within itself an echo of those distant origins: it is a compound derived from the name of the frame-making company, Che(mical) Mould(ings). But Kekoo was not devoted simply to the expansion of his own gallery practice. His historic contribution lies in the generosity and public-spiritedness with which he worked to create and sustain the cultural infrastructure in which modern Indian art could live, breathe and grow. An indefatigable advocate of institution-building, Kekoo was at various times active in, or supported, the Jehangir Art Gallery, the Bombay Arts Society, the National Gallery of Modern Art’s Bombay branch, the Lalit Kala Akademi (National Academy of Fine Arts) and Triennale India 1968, the country’s first brave, now almost forgotten foray into the international circuit. Always ready to sit on a committee, never tired of lobbying politicians and bureaucrats, he worked from an intelligent awareness of the necessary connections between art practice, enlightened patronage, responsive governmental institutions and a liberal public sphere.

Kekoo understood the importance of creating national-level bodies to present modern Indian art to the new republic’s citizens at a time when some mandarins in Delhi refused to look beyond the subcontinent’s ancient sculptural traditions. He defied the developmentalist dogma that investment in economic growth came before investment in culture. As early as the 1960s, he saw merit in touring Indian art internationally, not only to London, Paris and DuÌ?sseldorf, but also to Tehran, Cairo and Bagh- dad. His involvement in art was the practical expression of a cosmopolitan attitude: one that did not simply assume a fluid and borderless world citizenship, but labored against the grain of nationalist sentiment to identify affinities even while recognizing differences between vibrant art scenes and transitional societies set geographically far apart.

A CHAMPION OF INDIAN modernism, an associate of the Moral Re-Armament movement (MRA), an opponent of the Emergency (1975-1977) and a friend of the Safdar Hashmi Memorial Trust, founded in memory of the playwright slain in 1989, Kekoo put his money, energy, time and considerable network of contacts where his mouth was. An optimistic, uncompromising idealist, he acted fearlessly on his convictions. During the Emergency, this meant offering shelter to dissidents on the run from a state that had suspended civil liberties. Between 1996 and 2004, this meant openly criticizing the right-wing government of the time and supporting its critics. Later in the summer of 2007, a number of us, galvanized by the artist and activist Tushar Joag, organized the “Free Chandramohan Committee” to demand the release of an art student from Baroda brazenly arrested by the police on grounds of obscenity and communitarian provocation. Of course, it was Kekoo who addressed our first assembly from the steps of the Jehangir Art Gallery; although 87 and frail, he denounced neofascism and called in his characteristic ring- ing tones for the defense of cultural freedoms.

Kekoo and his wife, Khorshed, ran Gallery Chemould. Or rather, Khorshed ran it while Kekoo dreamt, talked, shared his infectious enthusiasms, drew up manifestos and formed coalitions. Married for nearly seven decades, they were the archetypal portrait of beautifully wedded opposites. Khorshed’s practicality and eye for detail provided a bracing, productive counterpoint to her husband’s preference for high-altitude navigation in the realms of vision and policy. Chemould’s program was inclusive. By hosting a wide spectrum of artistic positions between the 1950s and the 1990s—positions ranging from the abstractionist and allegorical to the minimalist and conceptualist—the gallery helped define the main currents of postcolonial Indian art. But the Gandhys’ gallery practice could also be adventurous, counterintuitive, defiant of received wisdom, sometimes anticipating turns in curatorial and art historical practice. For instance, they chose to show the artist Jivya Soma Mashe (an ethnic Warli whose work would later be shown by Jean-Hubert Martin in the groundbreaking
if controversial exhibition “Magiciens de la Terre,” at the Centre Pompidou, Paris, 1989) and to collaborate with the Hazaribagh-based environmentalist, feminist and rural-arts activist Bulu Imam at a time when so-called tribal art was met with condescension if not outright derision in metro- politan art circles.

Looking back at the Gandhys’ stellar contribution, including memorable exhibitions by a dazzling array of artists—among them, to name only a few, Bhupen Khakhar (who went on to be the first Indian artist shown at Documenta, in its ninth edition, 1992), Atul Dodiya (shown at Documenta 12, 2007), Nalini Malani (shown last year at Documenta 13), Subodh Gupta, Bharti Kher, J. Swamina- than, Vivan Sundaram, Anju Dodiya, Gieve Patel, Nilima Sheikh, Mehlli Gobhai, Sudhir Patwardhan, Jitish Kallat, Reena Kallat and Shilpa Gupta—it seems improbable that they could have staged all these achievements in the cramped, kidney-shaped environment of the old Gallery Chemould. But that is exactly what they did. How remote that interior seems as we walk through the sleek, expansive spaces of Chemould Prescott Road; and yet, Gallery Che- mould’s restless energies continue to inspire and circulate through the successor establishment.

RANJIT HOSKOTE is a Bombay-based cultural theorist, poet and curator.

Atlas is a rotating series of columns by writers from Bombay, Glasgow and Mexico City.