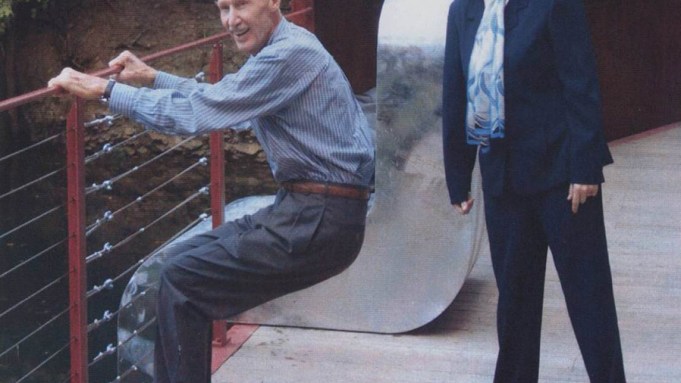 Richard Artschwager influenced me within two weeks of my arrival in New York City on the night of Dec. 31, 1976. In the freezing winter of 1977, I visited the Leo Castelli Gallery on West Broadway and saw Richard’s works. I remember standing in front of a wood grained Formica altar, next to a large painting in black and white Celotex, and scratching my head in wonder. In his 1988 retrospective at the Whitney Museum, I was amazed by his works.

One day in 1992, Richard appeared unannounced in my studio at 435 Hudson Street. He had a folder of drawings under his arm and his weird grin. He asked, “Do you want to trade drawings?” I said “sure,” and gave him two 5-by-7-inch watercolors for his large charcoal drawing.

I asked, “What is this? A landscape?”

“It could be, but also it could be an unmade bed,” he said.

He took out a charcoal pencil and signed the bottom, “To Steven Holl, friend of artists.” Since that day, the drawing has hung in every apartment that I have lived in. It is the first thing that I moved into my new apartment last June. I believe a drawing like that contains the joy, the passion and the just-plain-weird quality of an individual spirit.

Richard was amazingly individual. In an art world of herd mentality, Richard seemed to be on another planet. When we made Sitting, the huge sheet metal sculpture on an outdoor deck of my School of Art & Art History at the University of Iowa in 2006, Richard gave me the paper model he built by hand.

In 2011, when we closed his one-month show “Art and Action” at T Space, the not-for-profit gallery on my property in Dutchess County, he gave me two papier-mâché base chalk figures. I wrote a little note on the inside page of the catalogue: “Richard Artschwager’s amazing ongoing work spans decades without the slightest feeling of being dated.” Richard inscribed his 2002 exhibition catalogue The Hydraulic Door Check with a note to me: “Always more to come, talking mutually of course.”

Discourse was always a part of our friendship and work together. His incredible optimism about the next work has always been an inspiration, and at T Space, we are excited to honor Richard Artschwager. Like his 1994 piece made of metal bristles, the 15-foot-high Question Mark, Artschwager never fails to evoke essential mysteries at the core of art.

The text Richard wrote for his T Space catalogue was titled “Art and Reason,” and therein he wrote:

“It comes from the anthropologists and goes like this: the trouble with a human being arises from our being strongly individualist on one hand and social creatures on the other. There is an alternative to this schism that I like that goes like this: humankind can walk about and is capable of inhabiting a physical space and a social space as well. I bring this up because I think it can be of some use in dealing with our topic—Reason . . . reason and art stand correctly for the two fundamental modes of knowing.”

Richard’s deep connection to our experience of art was central to Sitting. Of the sculpture, he once said:

“This reminds me of the seated figures at Abu Simbel on the Upper Nile. They built a dam on the river, so they had to move things. They needed the water. (They had to do it.) It is an image and not a thing. The bumpiness of the surface slows down the looking: one sees not only the whole but the surface as well.”

That fine day of the opening of the new art building and Richard’s sculpture Sitting, we walked across the road to the original 1937 School of Art building. I pointed to an inscription in stone over the entrance that I had noticed on my first visit to the campus to interview for the new building. Ars Longa Vita Brevis Est.