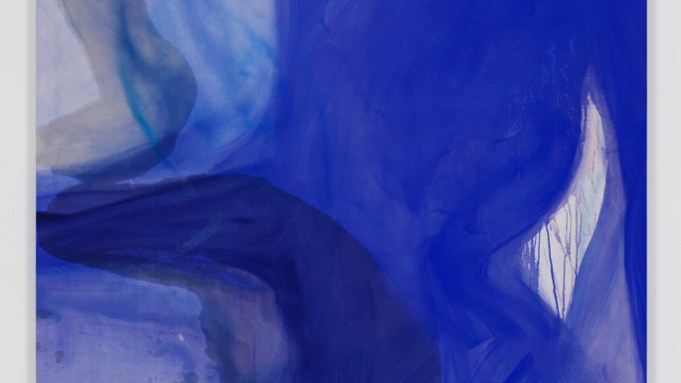 Titled after a 2010 painting that the artist considers pivotal, “Negative Muscle,” Rita Ackermann’s first showing with Hauser & Wirth in New York, is a tour de force of 17 large-scale paintings and smaller works on paper completed over the past three years. Ackermann has long been interested in melding figuration and abstraction, but in this installment, a new and versatile side of the artist’s esthetic is revealed. Androgynous forms populate the compositions as solo characters or in clusters, held together by subtle color relationships and swirling pools of painterly material.

Six works from her “Fire by Days Blues” (2010–13) series, in various blues and gem tones, dominate the exhibition. Fire by Days Blues VI (2013) and Fire by Days Blues XI (2011) both feature solitary figures, the hulking heft of the latter set off by melodramatic passages of cobalt, cerulean and ultramarine blue in the former. A delicate wash of violet grounds the figure of Fire by Days Blues VI in space, adding definition and depth to its corporeal form while, in other works, phallically endowed bodies seamlessly move in and out of the picture plane. Layers of transparent pigment, at times mixed with sand and rabbit skin glue, add a lustrous sparkle to the paintings, hinting at a reality beyond the screen of the physical image.

Named after a line in the poet Roger Gilbert-Lecomte’s “Vacancy in Glass” (ca. 1943), the series was initially conceived of after an accidental spill of paint on the artist’s studio floor. In an attempt to re-create this spontaneous act of artistic invention, Ackermann abandoned her formerly representational mode of painting in search of something more introspective. “This was an important moment for me. By repeating the elements of the raw creation of a disaster,” the artist told A.i.A., “and failing to keep it from unintentional learned gestures, I arrived at something that violently pushed itself between figuration and abstraction.”

Works on paper on the second floor have an altogether different feel. Here, the translucent washes of “Fire by Days” give way to angst-driven opacity, where the “conscious solution of problems,” according to Ackermann, wears itself out on the paper supports. Swathes of crimson intersect flesh-colored sections of thick impasto as visceral, heavy marks in oil and spray paint occlude any sense of otherworldliness. Instead, we are confronted with raw sensation, in all of its fierce, aggressive glory.

Negative Muscle (2010) adds extra depth to the exhibition. In this somewhat awkward mélange of oil, enamel, spray paint, molding paste and crayon, we glean how Ackermann was finally able to break the restraints of figurative painting and explore new territories within her work. Created immediately following her 2010 collaboration with filmmaker Harmony Korine for the Swiss Institute of Contemporary Art, the paintings on view stem from this singular artistic breakthrough, incorporating trace elements like the curving blue band that appears at the base of the composition and mirrored in the floating, truncated figures that inhabit the larger works. Ackermann’s psychological prowess, registered through her distinctive brushwork and experimental use of materials, affords a welcome respite from the florescent din of the numerous art fairs happening in New York this week, not to mention the intellectually formalist nature dictating much of contemporary abstraction.