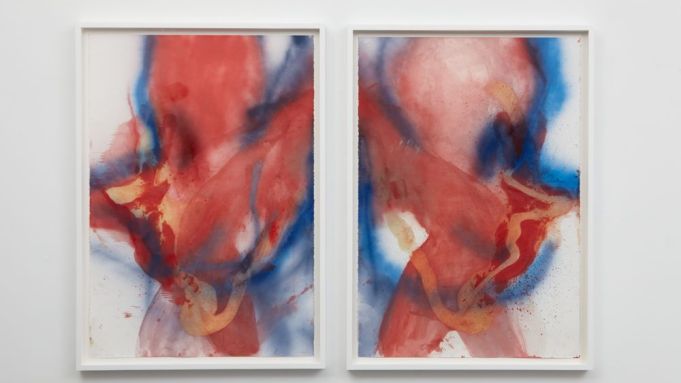 “If my work can relate more to poetry, then I am getting closer,” says Rita Ackermann, discussing “Fire by Days,” her most recent series of paintings and works on paper. The loose, understated abstractions are often rendered exclusively in indigo and red oil and enamel—newer works also include a nude tone—and touched by bursts of spray paint. The title of the series derives from “Vacancy in Glass” by poet Roger Gilbert-Lecomte, whom Ackermann discovered through the writings of Antonin Artaud. The poem’s final lines, “In a swift white line/On a black space/A brushstroke/Signifying absence,” imply the flight of a bird as a symbol of loss, and reflect the artist’s new impetus toward unbound, gesture-based abstraction.

Currently on view in a solo show “Fire by Days” at The Journal Gallery in Williamsburg, as well as in the group show “Mix/Remix” at Luhring Augustine, Ackermann began the works in this series in 2010. The Journal Gallery’s small show of works on paper includes a false mirror-image diptych, Fire by Days XV (2011). Like many of the works in the series, the abstraction recalls the fleshy outline of a female body, rendered in red and nude tones. Many of the works are diptychs, created from a monotype process, and all the works are made in pairs. “For the diptychs, I create a monotype by pressing the pieces together, then I work on each one separately.”

“Doing two pieces simultaneously takes away from having too much stress and tension on one piece,” says Ackermann. “Each side develops differently, and they play off each other.” Her process includes making rules for herself to keep the works free of what she terms “manipulation”-undue interventions that feel unnatural or heavy-handed. “While I’m working, if one piece starts to get a little more attention, I immediately try to pull back, and give attention to the other one.”

The works at The Journal Gallery arrived from the Ludwig Museum in Budapest, where they were shown in a solo show with larger works and older pieces. Ackermann grew up in Hungary, before moving to New York in the early ’90s, where she became known for figurative works of painting, drawing and collage that abounded with insouciant young cartoon girls whose facial features mirror Ackermann’s own. The lyrical, line-based abstractions of “Fire by Days” are devoid of the charming visual chattiness of her former work. The reported inspiration for her new abstractions was a Hungarian fire safety poster. “That got misunderstood completely,” laughs Ackermann. “I had a accident-I spilled paint on the floor, and I wiped it up with a fire safety poster from Hungary. But it wasn’t the poster that inspired the series-it was the accident.” The resulting piece, Burnt 3, 2010 (enamel and spray paint on printed paper), recalls an Yves Klein “Anthropometry” body painting-it appears as though a human, coated in red paint, has been pressed against a poster.

The press release for Ackermann’s Journal Gallery show begins with a vituperative dressing-down of the “Fire by Days” works, made by a critic reviewing a two-person show of Ackermann and Philip Guston this spring at New York’s Franklin Parrasch gallery. In the piece, titled “Ackermann and Guston Go Toe-to-Toe, One Loses,” the writer states that he “found it heretical to place Ackermann in the same room as Guston,” and compares the “Fire by Days” work to “a bloody diaper.” “I wasn’t trying to be sarcastic when I used this review as a press release,” says Ackermann. “It interests me that with certain gestures in art, you can create this sort of exorcism of anger in people. I’m not trying do that, but I am interested when that happens.” While these works may be far less assertive in content than her former pieces, which often displayed an unapologetic sexual assertiveness, the “Fire by Days” series seems, from Ackermann’s perspective, anachronistically drawn to controversy. “They struck a lot of anger in Hungary as well,” says Ackerman. “It hurts, but it makes me interested to find out what strikes this violent response.”

“I am not an advocate of the argument that either abstract or figurative is the higher form of fine art, but it is an interesting thing when you work your way toward abstraction,” says Ackermann. “I’m not perfecting my work from figurative to abstract. I am trying to grasp a simplicity that I was always working towards.” A large painting at Luhring Augustine, Fire by Days (blues) I, 2012, is a smooth, rhythmic assertion of indigo and nude tones. All notions of decoration, or figuration, are cast aside. “That simplicity comes from time.”

A Rare Autographed Musical Manuscript by Mozart Could Be Yours for $250,000