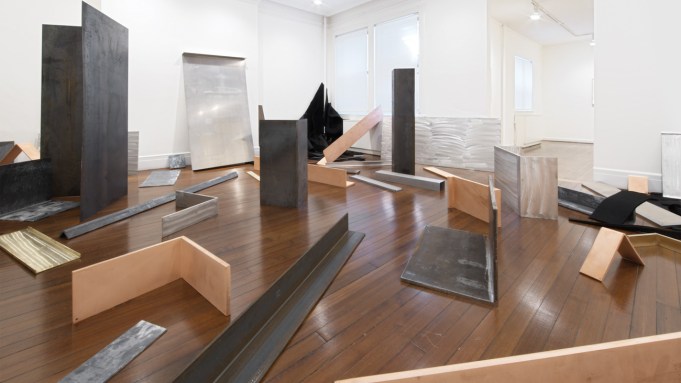 Robert Morris has re-created one of the key works of Post-Minimalism, Untitled (Scatter Piece), 1968-69, at Leo Castelli Gallery on 77th Street. First exhibited along with Continuous Project Altered Daily at the Castelli Warehouse on West 108th Street in March 1969, Untitled (Scatter Piece) traveled to the Corcoran Gallery of Art in Washington, D.C., the following November as part of an early Morris retrospective, but was not sent to the exhibition’s next venue, the Detroit Institute of Arts. Instead, it was returned to storage, and subsequently disappeared—curious, since it consisted of 100 hefty pieces of metal and 100 pieces of heavy-duty felt, and weighed about 2 tons.

Re-creation, with its implication of exact reproduction, is perhaps an imprecise word for the 2010 project. The elements in the new work are indeed the same type as in the original, but their disposition (not rule-bound but arrived at intuitively) responds to the work’s location: Morris maintains that Untitled (Scatter Piece) would exist in a perfectly valid iteration while in storage—presumably neatly stacked rather than strewn about.

The rectilinear metal pieces are made of copper, aluminum, zinc, brass, lead or steel, and arrived at their forms by chance operations (coin tosses and numbers randomly taken from the phone book), which determined each element’s length, width and thickness, and whether it was to be left flat or bent at a right angle, either once or twice. The dark gray felt pieces, equal in number to the metal ones, corresponded to the shape of each metal piece before bending. Morris developed and diagrammed his fabrication instructions on sheets of graph paper (nine are included in this show), and he followed them for the work’s re-creation.

In the current exhibition, Morris has heaped the felt pieces in the room’s corners and distributed the clean, beautifully crafted metal parts over the polished dark wood floor. A number of the metal pieces also lean against the walls and radiator. In the 1969 installation, the felt and metal mingled together in the rougher brick and concrete warehouse space, both on the floor and against the walls. Although the artist directed the arrangement of the elements of Untitled (Scatter Piece) in all its incarnations, he says that his hand is not necessary: in fact he told the gallery director, Barbara Castelli, that she could do it herself, and when she demurred, he suggested, perhaps humorously, or perhaps not, that she could ask a couple of eight-year-olds to take on the task.

This attitude, insouciant as it might seem, speaks directly to the Duchampian roots of Morris’s enterprise. Morris has always been an intellectually formidable and radical provocateur with a foundation in philosophy (his writings are dense but persuasive) as well as in theater and dance. Even his ostensibly Minimalist sculptures of the mid-’60s relate to performance and movement. Morris’s early task-oriented dance work with Simone Forti, Yvonne Rainer, Carolee Schneemann and others shows itself in many of his sculptures, but especially in Post-Minimalist works such as Untitled (Scatter Piece) and Continuous Project Altered Daily. In both sculptures, workmanlike activity—at the points of inception and installation in the former,and on a daily basis in the latter—took precedence over final form.

These sculptures were produced at approximately the same time as one of Morris’s most influential and contested essays, “Anti Form.”1 Published in Artforum in April 1968, the article argued for an art based on a foregrounding of process and material, and took Jackson Pollock’s dripping and Morris Louis’s pouring as the new sculpture’s immediate antecedents. The lessons of Pollock and Louis, when applied to sculpture, would yield work that was open-ended and non-estheticized. Morris writes:

The focus on matter and gravity as means results in forms that were not projected in advance. Considerations of ordering are necessarily casual and imprecise and unemphasized. Random piling, loose stacking, hanging, give passing form to the material. Chance is accepted and indeterminacy is implied, as replacing will result in another configuration. Disengagement with preconceived enduring forms is a positive assertion. It is part of the work’s refusal to continue estheticizing the form by dealing with it as a prescribed end.2

Untitled (Scatter Piece) and Continuous Project Altered Daily,showing at the warehouse, were paired with two untitled antiform pieces by Morris exhibited at the same time at Castelli’s 77th Street gallery. These works, one now in the collection of New York’s Museum of Modern Art, the other destroyed, were composed of thread waste—commonly found bundled on the streets of pre-gentrified SoHo—and other miscellaneous industrial detritus. The four sculptures, which were rooted in Duchamp, John Cage and Fluxus (although Morris disassociated himself from that movement early on), exemplified the new conceptual, loosely sprung performative sensibility taking hold in New York and Europe, a sensibility shared by contemporaries like Barry Le Va, Keith Sonnier, Richard Serra and other Post-Minimalists, as well as by the Italian Arte Povera artists. Importantly, in its material and spatial freedom, its acceptance of excess and indeterminacy, as well as in its responsiveness to site, Morris’s work prefigured that of a wide range of later sculptors, from Judy Pfaff and Felix Gonzalez-Torres to Jason Rhoades, Cady Noland, Jessica Stockholder and Karen Kilimnik.

On a personal note, I was delighted to see this work again. As a young artist, I was the person seated at the desk (more like a card table), keeping a watch on things at this lightly attended northern outpost of the New York avant-garde. The Castelli Warehouse was an exhibition space that showed some of the most exciting work around, and it was also a treasure trove, with racks and aisles full of Rauschenbergs, Rosenquists, Chamberlains and Warhols, which I got to look at carefully during my not very strenuous days. That Morris exhibition has stayed with me over the years, not just for its manifest qualities, but also for something that happened midway through its run. As I was reading a book, an imposingly scowling figure came into the empty gallery. I recognized him immediately as Richard Serra, who had participated that past December in the much talked about group show (organized by Morris) at the warehouse, “9 at Leo Castelli,” and whose work I admired immensely. He walked directly to the room that housed Continuous Project Altered Daily—an agglomeration of earth, water, paper, grease, wood, plastic and seemingly whatever unartful material had been at hand—lifted the rope and strode in. My mild state of alarm ratcheted up when he began kicking things around, very much like a child does to a tempting pile of leaves. I said, in what I am afraid was not a very authoritative voice, “Excuse me, but I don’t think you are supposed to do that.” Serra turned to me and said in a tone of withering scorn, each word equally and forcefully emphasized, “It doesn’t matter.” And evidently it didn’t, since Bob came in later to do his daily labor, and didn’t notice Serra’s alterations, or if he did, kindly didn’t mention them. When the show ended, he gave me the mud-splattered sign by the door—one of the few artifacts, I believe, of the long-destroyed piece—and inscribed it to me. I was, and I am, very grateful.

1 Allan Kaprow, for example, took Morris to task in an article in the Summer 1968 issue of Artforum, “The Shape of the Art Environment: How Anti Form is Anti-Form?”.

Richard Kalina is a painter who writes about art.

A Rare Autographed Musical Manuscript by Mozart Could Be Yours for $250,000