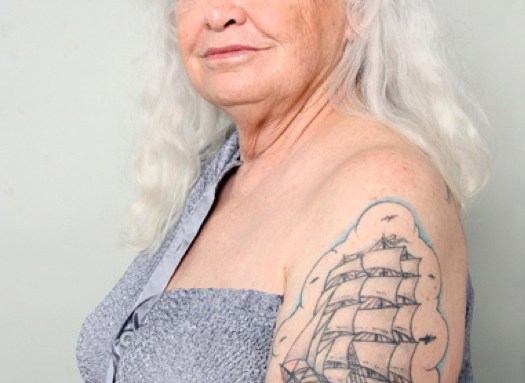 Rona Yefman makes empathic portraits of unconventional individuals—her transgender brother; an elderly Tel Aviv man with a female alterego; and the fictional child heroine Pippi Longstocking, for instance. In her current exhibition, “Tuff Enuf,” at Sommer Contemporary in Tel Aviv [through May 5], she depicts her first American subjects. The Israeli-born, New York-based Yefman describes feeling alien in both places: “I take the role of the outsider, because that’s how I feel.”

The exhibition includes video portraits of two female tattoo artists. Dame of the World (2010–11) profiles the celebrated Shanghai Kate, “the godmother of female tattoo artists in America.” In the video, Kate lounges in bed in a small hotel room and tells Yefman about her career and personal past. Teenager in Love (2011) portrays Caitlin G., a young woman who lives in New York and tattoos herself. Yefman depicts Caitlin inking a design on her left bicep with what looks like a meat skewer.

For Yefman, tattoo art as practiced by Kate and Caitlin is distinctly American: “both their tattoos, which have very different styles, connect to the history of American tattooing and culture—the sailors, the criminals, the rebels, the gangs, the myth and much more.” Kate explains that tattooing, now a mainstream phenomenon, is used to mark exclusion. “Really only sailors or crazy people got tattooed, or prostitutes,” she says.

Kate tells Yefman about the challenge of breaking into the tattoo industry as a woman. “Women were not only not tattoo artists, they didn’t get tattooed.” In order to be tattooed by Sailor Jerry, the celebrated tattoo artist who became Kate’s mentor, Kate says she first had to undress for him. In 1960s tattoo culture, Kate was an outsider: “I was young, I was female, and those were two strikes against me.”

Caitlin explains that she began tattooing herself because she couldn’t afford to pay for a professional to ink her. She tells Yefman that after an unfortunate personal encounter with a professional tattoo artist, “I didn’t really want to have anything to do with the tattoo shop world.”

Photographs of the women, images of their tattoos and transcribed excerpts of interviews conducted by the artist accompany the videos at Sommer. The photographs are staged while the videos are being shot, and we watch the women pose formally. At one point, a topless Kate stands before an American flag taped to the wall, next to a large plastic storage container. She mockingly pats the flag and calls it a “symbol of oppression and war and death and destruction worldwide.”

Yefman’s videos depict Kate and Caitlin as people who see themselves existing outside society. Kate calls herself a “born scrapper” to describe how she fought for a place among male tattoo artists. Letters tattooed on Caitlin’s fingers say she’s “tuff enuf,” though she expresses insecurity about making her way. Yefman portrays their willful independence as something uniquely American.

Yefman grew up on a kibbutz as a child, and became hyper-aware of difference—in dress, work, politics—which was frowned upon. On the kibbutz, she said, “Everybody has to be equal…And if you do something that is not in the norm people laugh at you.”

“I see society as a very repressing force,” she says. “For me the most important thing is self-expression . . . that people feel that they can be individuals.”

Yefman opens a two-person show with Davida Nemeroff at Annie Wharton Gallery in Los Angeles, May 17.