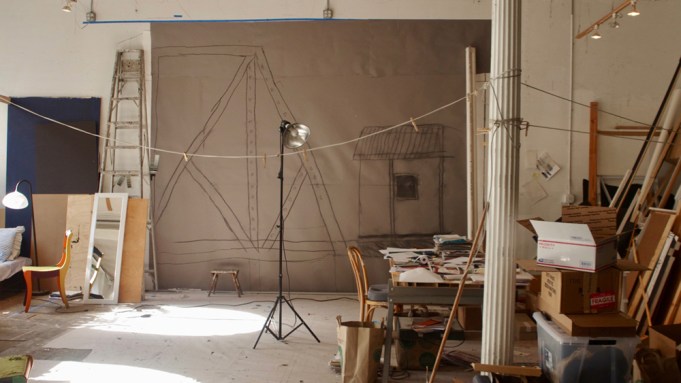 Last fall, at a public hearing for the Landmarks Preservation Commission, the owner of the cast iron building at 131-135 Duane Street in Manhattan presented plans for a two-story rooftop addition. The façade of the landmarked building can’t be altered, but the renovation plans presented by the landlord called for the removal of the entire interior. “You have to be able to stand in the cellar and see the sky,” sculptor Donna Dennis, who has lived in the building since 1973, told me. This is the legal definition of demolition that a landlord in New York may use to evict a rent-stabilized tenant like her.

Dennis became one of the former warehouse’s first residents as part of a wave of artists occupying Tribeca in the 1970s. After accepting a buyout offer for her loft, she’ll be one of the last tenants to leave before renovation begins later this year. An organizer and advocate for the Loft Law to protect residents of former commercial spaces, she has spent decades fighting to keep her home and studio on Duane Street. As in nearby SoHo and NoHo, the live-work quarters of artists in Tribeca have faced pressure from gentrification for decades. But unlike those neighborhoods—zoned for manufacturing and undergoing a rezoning study that many believe will lead to further displacement—Tribeca is already zoned for corporate headquarters, large hotels, entertainment, and retail. Dennis and her neighbors have cooperated with volunteer organizations such as the Lower Manhattan Loft Tenants and the New York City Loft Tenants to resist landlords hoping to capitalize on the commercial and cultural value built by the artists. Dennis remembers testifying in a tenant suit against a former landlord in 1982. At the time, she was constructing her Masonite and metal installation Subway with Silver Girders (1981–82). When she arrived at the courthouse, she said, “I had sawdust in my eyelashes.” The judge ruled in favor of the building’s tenants, she recalled, then concluded the hearing “because Donna Dennis has to go to the Venice Biennale.”

For Dennis, architecture is a feminist concern. Virginia Woolf taught her that the movement of the mind requires spatial articulation: “A woman must have money and a room of her own if she is to write,” the author wrote in A Room of One’s Own. In the 36-by-75-foot envelope of her loft, Dennis has constructed large-scale installations, including monumental sculptures and public art commissions for the city of New York. This is where she built Coney Night Maze (1996–2013), a labyrinthine fantasy inspired by the underside of a rollercoaster. The construction of wood planks and I-beams, sheathed by layers of chain-link fencing, ran 27 feet in length and rose 14 feet in a darkened space when it was installed at the Neuberger Museum of Art in Purchase, New York. Its winding corridors, glimpsed from the perimeter and illuminated by bare bulbs, intimated the unfathomable or the unconscious. This architectural evocation of psychological states has been a concern of Dennis’s throughout her career. Her towers, tunnels, bridges, and lit interiors reveal the workings of the mind: its habits of association, solitude, and dreaming. “I see the life of a building as being analogous to the life of a person,” she wrote for Domus magazine in 1980. “The same basic structure, but altered, enriched over the years.” In its surface incident and accretions, her third-floor loft elaborates the themes she explores in her work: passageways, temporary shelter, the residue of memory in the built environment.

To enter Dennis’s loft, you pass through a shell of scaffolding and into a bare, industrial foyer. The doors of the elevator, which has been out of service for two years, are closed. A blocked entrance is the sort of detail that often catches Dennis’s eye, because it suggests a hidden interior life. Behind such a door might be a tunnel into the earth, or a vast echoing chamber.

Light streams into the studio through tall windows that face the cast-iron buildings to the south. There are clamp lights and wires rigging homemade fixtures from the ceiling. Her work tables are covered with papers, brushes, and pencils. On the floor are rolls of fencing left over from Coney Night Maze, along with piles of wood, boxes, bags, and stacks of old newspapers. “I know where everything is,” she said. “I might see a spoon lying under the couch. Later, when I need it, I know where to find it.”

On one table, balanced on a pile of books, is a maquette she made as a study for Ship and Dock/Nights and Days or The Gazer (2018). Its black plastic frets approximate the girders of a giant ore dock on a miniature scale. Installed at Lesley Heller Gallery last year, Ship and Dock filled the room. Built on the dock’s raised platform were two small sheds, one with an interior light left on as a sign of an animating, private perception. Against the far wall of the gallery and visible through the girders, the video projection of the horizon cycled from night to day over four-and-a-half minutes, accompanied by the sounds of water and the clamor of rigging. Inspired by the artist’s visits to Lake Superior, the work, like many of her installations, transformed a structure she saw in the world into an oneiric dialogue between figure and ground.

Dennis relies on her red Winsor & Newton notebooks, which line several shelves in her studio. She started keeping a journal in the late 1960s. “I was in kind of a major romantic thing with the poet Ted Berrigan,” she told me, “and Ted kept a journal.” An aspiring painter, she carried the notebook to sketch what she saw. Berrigan and the other poets around St. Mark’s loved artists, she recalled. They were always interested in what was going on in painter George Schneeman’s studio. Schneeman, they said, is the greatest artist of all time! They never asked what was going on in her studio. “After a while,” she said, “I developed this work block. I thought it was me. When the statistics started to come out about how many women were in the Whitney Biennial, I thought, maybe it isn’t me. It’s the system.”

She started a consciousness-raising group with her friend Denise Green, attended mostly by the girlfriends of the poets. They didn’t really speak with one another at readings, but all of a sudden they were talking and dancing with one another at parties. “It drove the guys nuts,” she says. “Ted Berrigan said, I want to be a fly on the wall at one of your meetings.”

But this was precisely the point. This was what Woolf was talking about. The male poets had already claimed the wall—and the green lawns and the entrances to libraries and the public squares with their monuments and tall commanding statues. As she developed her feminist point of view, Dennis began looking for ways to move off the canvas and into the room. Her early “Hotels” (1972–73) and “Tourist Cabins” (1976)—flat façades or compressed enclosures—reference the road trips she took with her family as a girl in Ohio and the flimsy comfort of temporary shelters.

As her structures grew in complexity and scale—Deep Station (1981–85), for example, filled the lobby of the Brooklyn Museum with the towering columns of an empty subway station—Dennis took the ad hoc, improvisational approach she has used to construct her loft. Above the bed, you can see where she stopped painting the ceiling when she couldn’t reach any further. In the studio, the tiles of the floor are scored with the impressions of her tools. Between the bedroom and studio stands the wall she built when a boyfriend moved in. A shelf in the bedroom was made from a remnant of her old sleeping loft. The eagle will shape its nest with its body, she told me, and she has done this too.

Dennis used her buyout payment to purchase a house upstate on twenty-nine acres with a barn where she’ll work. She said she will miss the windows. She used to look out at night and see the north tower of the World Trade Center, its red light blinking. Soon she will have a view of the open sky. This was Woolf’s promise—“which is freedom to think of things in themselves. That building, for example, do I like it or not? Is that picture beautiful or not? Is that in my opinion a good book or a bad?” So the mind becomes a lit interior, an outpost in the dark.