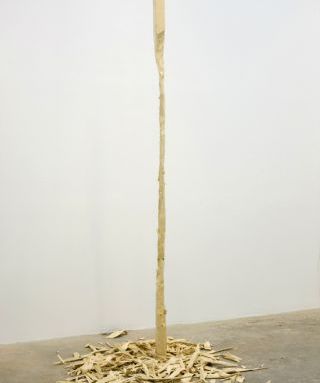 RoseLee Goldberg founded PERFORMA in 2004, and this fall the fourth edition of her critically acclaimed, inclusive biennial will open in New York. On Wednesday evening, I joined the tireless art historian, curator and performance-art guru for a whirlwind visit to the contemporary pier at this year’s Armory show. No small feat, as every three steps she stopped to say hello to a current or former student, an artist or an old friend. We were joined by Tracy Timmins, a painting student at NYU who is also Goldberg’s teaching assistant. Read on to see which among the booths grabbed her interest, and how even at an art fair—an environment not generally known for its performance art—Goldberg is always scouting.

Goldberg, who grew up in Durban and went to college in Johannesburg, made a beeline for Goodman’s booth in the middle of Pier 94’s crowded nave. There she was instantly drawn to a pair of black and white beaded aprons, made by Kendell Geers, a South African artist now based in Belgium, in collaboration with Ndebele crafters outside of Johannesburg. “When I see his work I associate it with live performance. I think about what happens when you put yourself live. I can see people dancing in my mind; I have the music in my head.”

Next up, an Egyptian artist in whom Goldberg saw definite Performa potential. Wael Shawky recently had a four-month residency at the Pistoletto Foundation in northern Italy, and while there he discovered a cache of damaged 200-year-old marionettes. He sewed costumes, designed a set, selected an instrumental Arabic and electronic music soundtrack, and used the wooden puppets to make an epic half-hour film called Cabaret Crusades. For the fair, Sfeir-Semler hung a few large photos of Shawky’s semi-restored marionettes. “He’s making revolution now, not work,” someone with the gallery deadpanned, when Goldberg asked what Shawky is currently doing.

On our way over to Sean Kelly’s booth, we ran into Jesper Just, a Danish artist who was one of the breakout stars of the first Performa biennial, in 2005. “You look like a Viking!” Goldberg exclaimed, proudly stroking Just’s full beard. When Goldberg said she wanted to check out Kelly’s set-up, I assumed it was to see the video of Marina Abramovic and Ulay’s performance Light/Dark, where the two take turns slapping each other over and over again. But once we finally found our way to Kelly’s double-wide space, Goldberg stood mesmerized in front of Leandro Erlich’s video, Subway. A metal structure flush with the wall replicated the type of sliding door found between train cars; in the vertical space where the window would be, Erlich installed a short looped video he made on a Buenos Aires subway. As we walked away, Goldberg’s phone rang. “I’m right outside Marina smacking Ulay,” she directed the person on the other end. “Come find us!”

It was hard to miss Jon Kessler’s spinning mirrored sculpture/video installation, even among the Armory’s chaos. When one of the gallery employees was unable to answer Goldberg’s questions sufficiently, she whipped out her BlackBerry and called Kessler herself, leaving a message. He called back two minutes later. Goldberg fired questions, and with the phone to her ear, repeated Kessler’s responses:
“Who is the hairy man?”
“It’s a self-portrait . . . had I made some different life choices.”
“What nightmare or dream did this come from?”
“He’s a hippie/homeless/terrorist dude, a floating symbol of everything going wrong in the world.”
Glad that’s cleared up!

We visited IBID Projects towards the end of the long evening. Although the booth included work by four artists, the installation seemed much less hodgepodge than many of the others. Two of Marianne Vitale’s wonderfully textured, reclaimed lumber wall sculptures framed David Adamo’s whittled, pale wood column surrounded by a pile of delicate shavings. Goldberg checked her phone; turns out Performa is hosting an open studio with Vitale next week. “Want me to forward this to you?” she offered, to the few of us remaining.