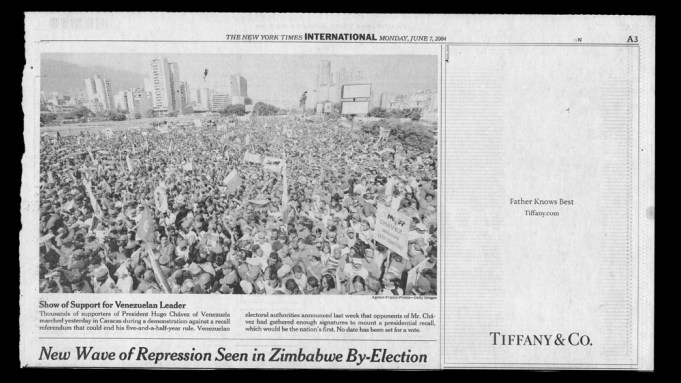 “I’ve been a news junkie forever,” Ross Bleckner told A.i.A., when we spoke about his book My Life in the New York Times, released last month by Edgewise. A second volume, A3: Our Lives in the New York Times, comes out July 31. These two volumes put personal and polemical spins, respectively, on reproductions of the painter’s inspirational notebooks from the past three decades, which he fills with sketches, marginalia and obsessive clippings from the Grey Lady.

“What is the news if you can’t pick and choose and create your own narrative?” he said, referring to the artistic road map he’s created from real current events. The dedication on the first page of My Life is in the form of an obituary that includes the artist’s mother, Ruth, along with 17 others. On the last page of the book a collage of blank scheduling pages serves as a background for a clipping of an unattributed Richard Preston quote about the life cycle of a star (“Gravity, the agent that makes a star, is also constantly hastening its collapse”). The intended aim is to reverse the cycle of life, and the summation of the clippings the artist has compiled serves as a meditation on tragedy, loss and the quirkiness of everyday life.

An excerpt from James Fallows’s 2008 commencement address at Ursinus College implores students to not “type I.M.’s while you drive. Get in the habit of sports and exercise-by your 10th reunion, you’ll know who has and hasn’t,” which offers a sense of hope from the preceding page’s Proust quote: “The cruel law of art is that people die.”

A3, meanwhile, is Bleckner’s examination of the often tragically ironic juxtapositions, on the top of page A3, between the day’s most newsworthy and dramatic photo (typically a horrific image pulled from the international news section) and a Tiffany & Co. ad that has filled that space for decades. (Bleckner is not alone in his use of A3 images-Richard Prince cleverly incorporated several A3 ads into a number of his “Tiffany Paintings” exhibited at Gagosian Gallery last spring.)

In an introduction, Bleckner writes that the A3 clippings he chose for the book are not manipulations, but are presented as they appeared in the paper. The forced juxtapositions create a vision of the world that is simultaneously exotic and depressing, of starving children upstaged by diamond baubles, for example, all co-existing in the space of one broadsheet page.

Contradictions abound in A3, which begins with Kevin Carter’s disturbing, Pulitzer-winning photograph from March 26, 1993, of an emaciated child collapsed along a desert road in western Sudan, a vulture looking on behind her. This haunting image-itself the sole focus of Alfredo Jaar’s 1995 The Sound of Silence-is paired with a $1,000 sterling silver baby elephant paperweight. “When I cut it out and looked at it, I couldn’t believe the irony,” recalls Bleckner. “Each one has that element. The luxury, the tragedy, I’d look at it and say, ‘Is this a joke?’ I kept thinking, they must know this is a goof.”

It’s quite apparent that they don’t know, or simply don’t care, because Bleckner’s book goes on to highlight two decades’ worth of glaring ad-edit contrasts. A bleak image of haggard refugees in Georgia competes with a feline brooch and the heading “Scaredy-Cat!” A Zimbabwean man under threat of arrest for hawking bags of tomatoes wrapped around his fingers is pitted against three five-figure cocktail rings with a banner reading “Wrapped Around Your Finger.” And in what may be one of the more wildly inappropriate pairings, a $350 salt-and-pepper set in the shape of a watering can, shovel and flower pot is shown next to bird’s-eye photo of a flooded Haitian village.

While this isn’t the first time Bleckner has used A3 images, he has never employed them to such great effect. For his 1995 retrospective at the Guggenheim he included a couple of similar reproductions, but they were out of context and lacked the editorial punch of the book A3. A few years later, in 1998, he took close-range photos of them for a limited-edition photography book called Page 3 (Twin Palms).

“People didn’t get it because I used photos [of the Times pages] and didn’t explain what I was doing, and I did it closer up and left a lot of the text out,” recalls Bleckner. “They looked like my paintings.” He added a final dose of irony: “Tiffany is actually interested in doing a launch party. I think they’re debating whether it’s good for their brand.”