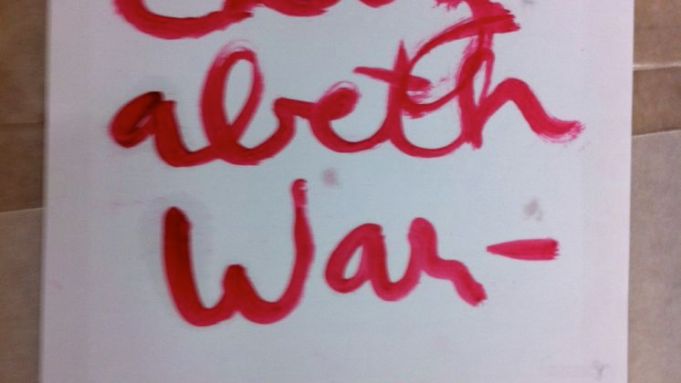 My final rove this month already felt assembled in recollection. We rushed to CUNY on Monday night to hear Sam Ace, a poet from Tucson, read his new work. Sam did the bravest thing in the midst of what felt like a very rangy, sexy, cerebral reading. He showed on a screen a video of himself as a woman, years ago, reading her poems when he was her. I remembered that other friend, her cheekbones, her different reading style. My girlfriend and I were moved to tears by the enormity of his gesture: to stand there as both persons, both poets, still mainly asking questions about love.

Stephen Motika, the next writer on the bill, was originally from the West Coast, not like Sam who is a native New Yorker. Stephen’s grasp of landscape, and his comfort with the bigness of the West, wiggled comfortably like a river around queer theory, annexed by his appreciation of Mary Austin, a Victorian writer who lived in the Mojave Desert in the late 19th century. He merged his understanding of her writing with the place he knew, his own sense of home deepening our access to her migrant doing, her writing, in another time.

I’m sitting in Veselka right now, writing this. We left Stephen’s talk a little early to catch a screening at MoMA of Madeleine Olnek’s Codependent Lesbian Space Alien Seeks Same. If this title suggests comedy, well that’s exactly right, and Madeleine Olnek’s beaming and daffy intelligence manifests elegantly in this, her first feature, a black-and-white film that reminds me of early Jim Jarmusch while it posits a tingling other planet somewhere in the universe that is being ruined by the excessive emotions of its residents. The solution? They came to earth to date ferociously and get all that excess emotion out of their systems in order to save their home planet. Doesn’t this sound like the NYU students living in your building?

The aliens at least are cool. In Olnek’s film we see a handful of bald alien females who all seem to be lesbians and they are uniformly bad at “getting” girls because they are so profoundly weird. Of course one of them locates the dateless Woody Allen-type dyke who works in a stationery store, and she readily answers the note one of the aliens dropped from a flying saucer. An absurdly touching courtship between the dyke and the alien ensues while scorn is heaped on them on the dance floor of a mean gay disco. Our lovers don’t even notice. We watch them stroll blissfully along the boardwalk at Brighton Beach radiating the triumph of love over otherness.

Olnek makes the noir-ish surface of her film more drum-tight by including a couple of hapless g-men who follow the women around in a nondescript car. They’re onto the alien thing and these guys’ banter is spot on. Dennis Davis, the oafish straight guy of the two, gets rapturous while sitting in the car with his partner, describing his own very tacky-sounding wedding. In reply, brooding mumblecore veteran Alex Karpovsky asks if his partner’s bride is a trans-woman. What do you mean? I just wondered if your wife was a trans-person. She is not! Why would you ask that . . . ? All of which is delivered with an unerring indie flatness that courts our recognition that this foolishness actually means something.

Olnek compares gay characters today to pinko queers in the ’50s. Just as dangerous as communist “aliens,” the morphing trope of alien sexuality impinging “on us” has evolved into valuable cultural capital for whoever as corporate cooptation, as political red herring for the right, even as part of the larger phenomenon Sarah Schulman wrote about in the Times recently, an opportunity for right wing governments to “pink wash” their larger destructive political agendas by slapping a smiley OK with gay face on it. Olnek skillfully and pleasurably has managed to update the history of the sci-fi genre by linking it to the predicaments of the present. And finally, because Codependent Lesbian Space Alien Seeks Same is a comedy, its ending has a feel-good punch. That is if you think voluntarily leaving this planet (for another one) with your alien lover is a good thing, and I do.

It was raining so horrendously on the Tuesday before Thanksgiving when I took the D train to 36th street to Ulrike Müller’s studio in that building in Sunset Park where so many people, floors and floors of them, have their studios. At the end of this “roving” column I think I am concluding that “going out” is overrated. Galleries, museums, overrated. Studios are really the place so I’m ending my roam with studio visits. The journey “in” is the way to go. Though since it wasn’t my studio I had to go out in the rain to go “in.”

Ulrike Müller showed me her kiln and what she’s made with it: the small community of abstract signs; a row of small ceramic tiles with flickering motifs (painted with ground glass, she said) lined the molding along the floor of her studio. They feel like greeting cards of another order, as if you took the time to walk one of them (usually white with a sweep of another color dividing the tile) over to your friend’s or lover’s place with the message or symbol baked on. I love these – there’s nothing electronic about them at all. Last year in the “Reflecting Abstraction” show at Vogt some of these wavy symbols had shrunk to jewelry size, like tiny sexual messages -there’s something faintly dirty about them – but in the show she strung a group of these miniatures to make a kind of native looking jewelry with suggestive but secret meanings. Like more mysterious candy hearts.

Ulrike’s new work is light. It’s an idea spread wide. She originally became intrigued by a catalogue at the lesbian herstory archive, which inventoried all the political and cultural T-shirts that existed in their collection. Loving the list she made a sound piece out of them, an audio recording of herself reading each iteration of a T-shirt. It was installed by Dia at the Hispanic Society in 2009. Now she’s farming out the descriptions to other artists who are creating fresh images, paintings mainly, to suit or resuit the T-shirt description.

She has created another project for herself at the Brooklyn Museum where she will place these new works in relation to their permanent collection, creating a kind of libidinal space within the museum, the newer smaller groups asserting themselves into the more staid collection, changing it. Making more presentness, I think. This Elizabeth Warren painting is a take on a T-shirt description that included Ronald Reagan. Fox Hysen thought, “No, I see Elizabeth Warren instead.” I asked Ulrike, “Um, do you see yourself as. . .” – I was faltering in my question, I was saying anything – “are you a sculptor or a conceptual artist.” “I’m a painter,” Ulrike smiled. Of course, of course.

Doug Padgett really does make paintings, but when asked to explain “all this” he told me he was an inventor, and that does feel like the trembling through line animating his work. I’ve followed Doug’s paintings for years, since I first saw one of his Martian landscapes at the eclectic and thoughtful Schoolhouse Gallery in Provincetown, Mass. Doug’s studio is in Red Hook and it began pouring again as I emerged from the station. A car service was sitting there and once the driver saw that the deli across the street was bad he was only too happy to get me right away to Doug. It’s Brooklyn. There’s plenty of other delis.

Doug is probably the most literal painter I know. There’s not a trace of irony in the floor to ceiling painting of wood paneling. Instead there is a tremendous good feeling about it, like a beautiful musical instrument, lovingly sanded and stained, every last detail of the instrument producing the sound it holds. Doug’s work simply has a vibe. There’s a smaller painting of a naked light bulb illuminating half an ornate ceiling. The painting’s dark yellow and black. It’s almost funny, yet sad. They all in their literalness illustrate something we haven’t seen yet. They feel about to change, yet holding that space forever. Kind of a strange yearning.

He confesses he loves 19th-century painting, Martin Heade especially. And Frederic Church. Yes, yes, yes. I’m with you. Right or wrong, these painters were called luminists, because though it was landscape there was just something else. These are poems to me: each painting and drawing is a key to another work expanding invisibly within the room so that even though as I stand in front of so much “thereness” the painting always seems to, as Doug says, “push the subject matter back” so that a painting of a light switch can be a symbol of hidden mysterious forces in the world. Doug does skies, but like on Mars like I said or in Indiana, behind tall weird rows of corn, even the kitchen light, like that ring of neon, casts a dark sky of a sort.

Lately he’s been interested in puzzles, which strike me as the companion to paint-by-number kits. Both of them achieving, step by step. That’s the feeling of his work. Each puzzle has a rhythm track, Doug explains, and he pointed out the patterns for me. Some puzzles truly were cut in a lackluster way and others seemed to be opening and whirling – alive in their fashion. He got here by exploring the weird world of puzzles online – anything you want there’s a puzzle for it. I find this big white cat so sublime. ‘Cause though she is in the shape of a cat I think she’s also a bit of a sky. No . . . but really she’s such a good cat. Boy or a girl. I send her to you. She’s one of the puzzle pieces holding the world.